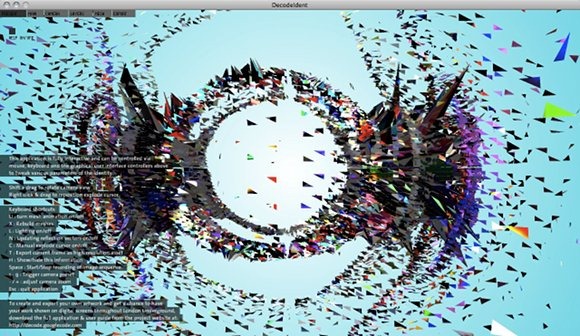 “Decode,” “Digital Design Sesnsations,” opened last night in London at the Victoria & Albert museum in a show running through April. The event was held in collaboration with onedotzero, a digital arts label, presenting organization, and production firm.

Rarely has there been this kind of blow-out explosion of interactive design creativity on this scale. Decode is showing some of the most sophisticated, bleeding-edge work out there, with artists including Daniel Brown, Golan Levin, Daniel Rozin, Troika, Chris O’Shea, and Karsten Schmidt. Photos at top from the official show’s Flickr stream; more from Chris O’Shea after the jump. (Artists, if you’d like to talk to CDM about your particular pieces, please do get in touch.)

One of the most interesting pieces is the logo itself, coded by Karsten (toxi) in Processing and open-sourced for modification. Open sourcing the logo has allowed others to participate in the show, a bit like the remix contests held by artists; hacked versions (cleverly dubbed “Recode Decode”) will appear in the London Underground. There are already some extraordinary works, like the moody grayscale rework by Joao Martinho Moura.

Of course, this also means you can have a look at Karsten’s code yourself and see if it can inspire your own work in Processing. It’s the modern-day, digital equivalent of drawing study sketches of a painting or apprenticing with an artist:

Decode by Karsten Schmidt [Processing] from CreativeApplications.Net on Vimeo.

The superb site Creative Applications picks up on the open source logo story, and also goes behind the scenes on the software project, encouraging people to share their results. (Here, here!)

onedotzero.app from CreativeApplications.Net on Vimeo.

And from the show itself, the opening as photographed by Chris O’Shea:

What Are Your Top Electronic Albums of 2009? (And How Do You Stay Organized?)

Life on the Grid: Behind the Scenes with stretta’s Max for Live, monome Music Suite