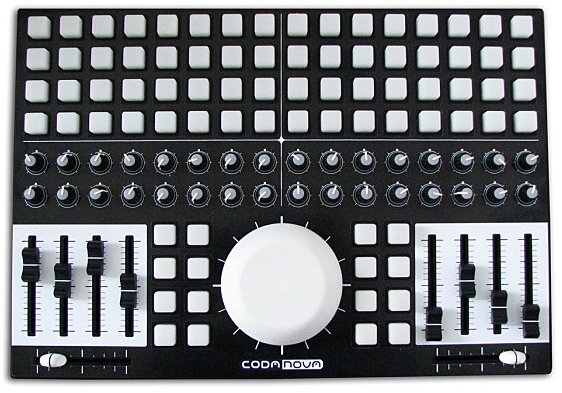 Somehow in May, I missed the introduction of Codanova’s VMX V64. With a huge jog wheel in the center, button grid, and lots of faders and knobs, it presents an interesting, visualist-friendly MIDI controller alternative to Livid’s Ohm64. Like the Ohm64, it takes the square button trigger design cue from the monome, but eschews that hardware’s minimalist, button-only approach for some other controls. Also like the Ohm64, while it could easily work as a music controller, you can instantly see that it was designed by people who use visual software. (Indeed, vvvv, GrandVJ, Resolume Avenue 3, and Modul8 are called out by name in the announcement.)

Come on, no snickering about “potards.”

Even more striking is the indescribably bizarre teaser video for the VMX Active8, a future, touch-sensitive controller. (Long-time followers of this stuff will instantly recognize some similarity to the ill-fated Midiman Surface One, a similar touch controller from the company that became M-Audio that never made it past the prototype phase. Apparently, that prototype is still floating around somewhere, but cost and engineering problems prevented the gear from being practical.)

I’m pleased to see the cliche of VJ babes be replaced by something … um … much stranger.

And the controller itself looks pretty fantastic. That beer-proof quality, if it works as advertised, has some distinct advantages. VMX Active8 is a prototype for visual software Modul8.

More on the Codanova site

VMX? vvvv? DMX? VDMX? Vidvox? You almost get the sense that someone spilled beer on their (non-beer-proof) QWERTY keyboard in this field, huh?

And yes, I’m way behind on this. So, come on, CDMotion readers, send those tips in! (CDMusic is usually more on top of things because I hear more often from the readers!)

MIDI
MIDI has a slick new brand identity, courtesy Pentagram, in time for 2.0
Windows
Deep in Serum: six sound tricks to explore just by double-clicking, with maestro Francis Preve
Hardware
Watch a hacked DJ technique made with karaoke tapes, by Ōedo Technica
MIDI
Strum is a mesmerizing new take on arpeggiators and performance – Max for Live
We use cookies and other tracking technologies to improve your browsing experience on our site, show personalized content and targeted ads, analyze site traffic, and understand where our audience is coming from. By choosing I Accept, you consent to our use of cookies and other tracking technologies. Please read our Privacy Policy.