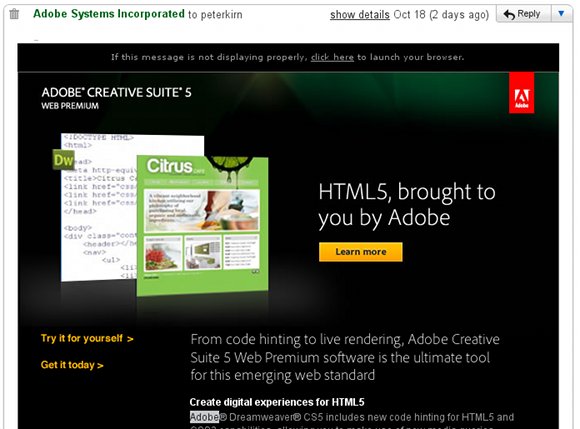 One of the dumbest things I heard tech pundits say this year – and more than a few did, more than a few times – was that somehow HTML5 was a threat to Adobe. The logic goes something like this:

1. Adobe makes Flash.
2. HTML5 does stuff that Flash does.
3. Apple blocks Flash from the iPad and iPhone. They say you can use HTML5 instead.
4. If you use HTML5, you don’t use Flash.
5. Adobe must be in big trouble!

Okay, whatever you think of Apple, Adobe, HTML5, or Flash, that doesn’t make any sense at all. It seems worth pointing that out, because what I assumed was obvious must not be.

Ignore that Flash appears very safe for the foreseeable future, and that Flash does things like animation that have nothing to do with HTML5, and that people are ignoring the AIR and Flex frameworks which are now on a growing number of devices, not a shrinking one.

Adobe is in the business of selling software. Their primary goal is pushing CS5. In some sense, Flash is just added ammunition to get people into an Adobe ecosystem. (And hey, more power to them – they’re one of the planet’s most successful software companies as a result.)

HTML5 is therefore great news for Adobe, because they can use it to sell more copies of CS5. In fact, in some perverse way, the fact that Adobe’s Flash developers now can’t use Flash on devices like the iPad is great news. Huh, why? Well, Flash users might be happy with the current version of Flash. But then Apple blocks it, and everyone needs to use something else. The company who can solve the problem for them: Adobe. (HTML5, for one, is complex and evolving and Flash developers may not know how to use it.) With recent changes to Apple’s developer agreement, Adobe can likely build a tool for iOS, too. And don’t forget Android – Adobe has an app for that. (It’s AIR, and CDM contributor Momo likes it.)

This is neither praise nor criticism for Adobe. It just is. And how anyone couldn’t see that has been making my head hurt. To try to explain that to other people, I’ve routinely been ranting about how I fully expected to see an email message in my inbox telling me that I could use this HTML5 thing just by trying the latest version of Adobe Creative Suite.

Well, this week, the email arrived. Please feel free, if you got one yourself, to print one out and mark it with a Sharpie that says “Adobe and HTML5 are not enemies.”

Happily, this is all good news for us, as it means Adobe is promoting some great emerging standards – even if you prefer a text editor to a lot of Adobe apps.

Music’s Future is Cloudy, But Maybe Not So Different; Human Size Matters

rants
SoundCloud to cut approximately 1 in 5 employees worldwide
opinion
NASA’s Webb telescope could transform how we imagine digital art, along with our cosmos
opinion
Soundwide = NI + iZotope + Brainworx + Plugin Alliance – what to know, what to grab for free
editorialopinion
Epic Games just bought Bandcamp – so what does that mean?