Make Your Own Video Hardware: Propeller Platform Does Video Out, Games, Advanced Audio

The Propeller Platform is open-source hardware with a mighty 8-core Parallax Propeller chip as its brain. Like the Arduino, it comes as a simple protoboard. But unlike the Arduino, the Propeller board is loaded with I/O pins and can output video and audio without much modification. It also comes with a powerful, high-level programming language called Spin, which makes coding it a bit easier. (The chip itself has a byte code interpreter.)

Video output means you could use this as a visual source. The game X Racer at top is actually running on this little board.

Also, it’s nice to see that there are open pins without header stuck in them, so you can more easily integrate the board with a finished project. Output to PAL, NTSC, or even VGA. (Sound options include 16-bit audio playback, and oddly, even TOSLINK/SPDIF output.)

Great write-up on Adafruit, which has just started carrying the board. Most astonishing is the price: US$50.

Now all we need is an open source, analog video mixer for combining these kinds of fun tools in performance. Anyone? 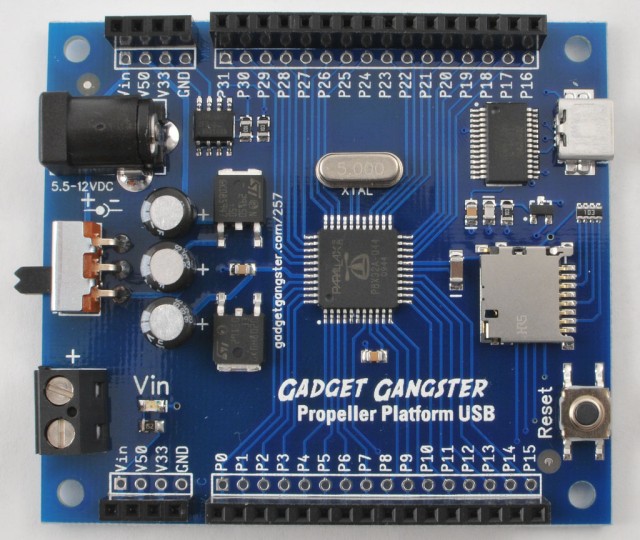 Addendum/update: Talking to a couple of folks I know who have looked at Propeller, the big problem is that its language is proprietary and, well, just not found anywhere else. It is powerful, but perhaps better suited to video than audio. The multi-core setup is still interesting for video, though; it’s just that my dream of open video devices may wind up appearing on a different platform. Hope we can kick off that discussion.

Chronome: A monome-inspired Grid, with Color and Pressure Senstivity