The SaikoLED is a project for wirelessly-controlled color LED lighting, based on several open source (or partially open source) projects. It’s not cheap, as such, though I think it’s reasonable for this kind of lighting – the fixture is US$800 for the light, so the rig in the video above would definitely cost you something to put together. The main advantage is flexibility. You can manipulate the light’s brightness and color wirelessly, with the ability to modify the firmware directly via USB port to do more. The components:

The project itself is interesting on its own, as are some of the building blocks that make it up. There’s tons of tasty stuff here for wireless OSC and UDP and dealing with power for lights, and they’re even working on a live CD of software to work with it.

It’s the wireless protocol, though, where the magic happens. In the video at top, a Pd (Pure Data) patch drives the whole lighting rig in sync to music. The video is described by Saiko’s Brian Neltner:

A demonstration of 15 Saiko5 LED Light Fixtures being used in combination with audio analysis software in the new “random flash” mode. This mode makes it so that on every beat in the music, the light switches to a new random color, at least 30 degrees away from the current color in hue. The saturation is randomized between 0.8 and 1.0 to allow for pastels.

RJ Ryan, lead developer on the Mixxx open source DJ project, writes to tell us that he hopes to implement the OSC message format used here into his Mixxx software, allowing for some powerful DJ+lighting applications.

Are we seeing the beginning of a new movement in DIY, synchronized lighting ideas – all with a common protocol? Maybe. Let’s not just wait for it to happen; let’s talk about what it’d take. (Not all lighting needs to be fancy wireless color LEDs; there are certainly some, um, Po Boy Special versions of the rig above.)

This looks like a terrific project, and I’m likewise impressed by the progress Mixxx has been making, so hope we’ll cover this more. Questions? Let’s hear ’em.

Make plans now to take them to Burning Man, as seen below. 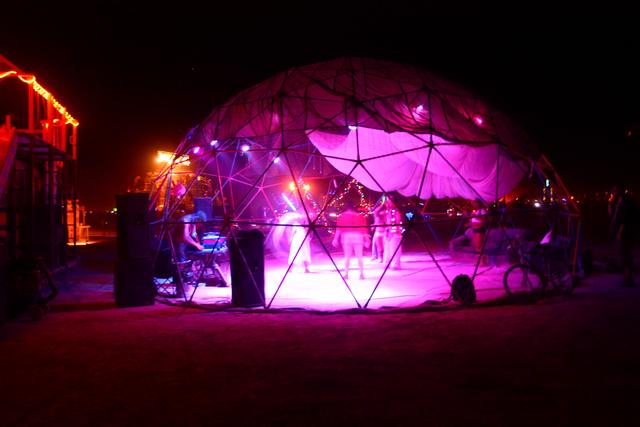 patching
SunVox 2.0: the nearly-free modular pocket DAW just got a slew of new features
DJ
Head by drone to a 3000-year old ruined village for a stunning performance by Hayk Karoyi
DIY
An album released on Nintendo 64 cartridge – the next nerdy Remute ROM release
patching
Softpop SP2 is next-level analog synthesis and processing from Bastl and Casper Electronics