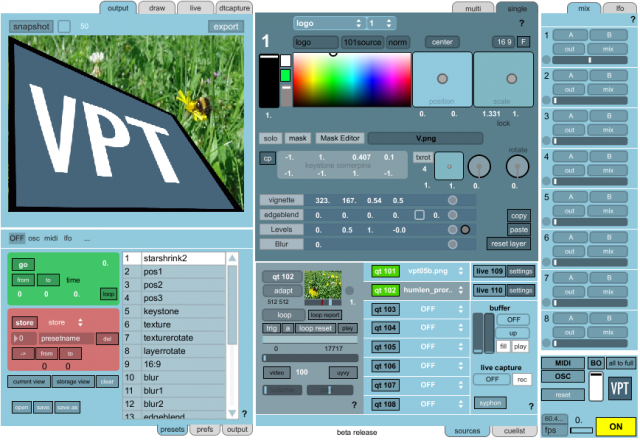 HC Gilje’s “conversations with spaces” research and work is an effort to blur the line between digital imagery and the surfaces on which it’s projected. But rather than just make this a solo endeavor, HC shares his Max/MSP-Jitter-based tools for Mac and Windows with the larger community, free. Using the model of sources, layers, mixers, and controllers, it’s a pre-built arsenal of tools for making projection mapping and manipulation easier. And in a major new release, he’s re-built that tool with new features, including:

Read the full release notes at his project blog:
http://hcgilje.wordpress.com/vpt/

HC shares with CDM his roadmap for the future of the app: 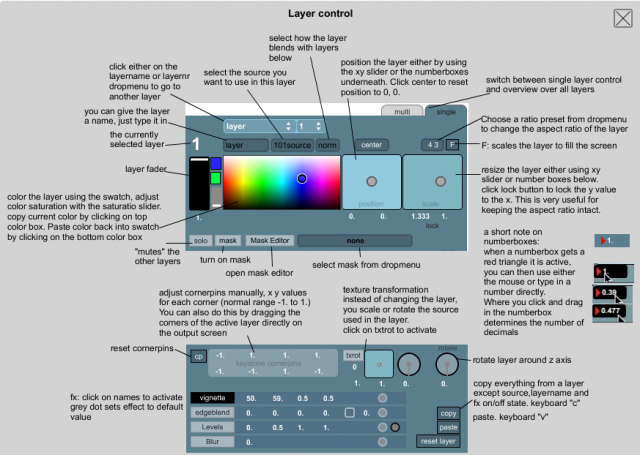 I hope to involve more people in the development of add-on modules, either internal modules but most likely external osc based modules.

Some of the possible modules:

shader dragndrop modules.
I plan to make a simple setup for people to create shader modules that can then be shared with others, which can then be drag´ndropped into a VPT fx chain. I hope to have the framework for this ready sometime in January.

a module for arduino/firmata,either for sensor triggering or for controlling for instance arduino based projector shutters. I will make the first version of this for a project I am doing in January.

external module communicating with VPT over OSC for motion tracking either using opencv or kinect. Someone has already made a tracking setup based on the previous version of VPT, so I hope they can be convinced to share their work.

I also know that various people are using either PD or Processing to create alternative control interfaces for VPT which I find really interesting, that is partly why I have extended the OSC functionality to cover almost everything controlable in VPT.

I am working on improving using VPT over a local network. Ideally I want to separate the interface completely from the VPT engine. I did this for the theatre piece “Fuglane” this fall but quite some work remains before that is done.

What I think works really well already is to do all the preparations for a project on my laptop with a projector connected, then just move the whole project to another computer (I often end up using macminis for installations) and it just works.

The most important feature that I think is still missing in VPT is the possibillity to record the output at qood quality and speed, which I hope the recording app that the syphon team is working on will resolve.

It’s a terrific tool. I’d love to have something similar for Processing and OpenFrameworks that worked natively in those environments; it’d be naturally designed differently to take advantage of those tools’ code metaphors, and then could also work not only with an open source tool but on Linux. If anyone’s interested in tackling that, let me know.