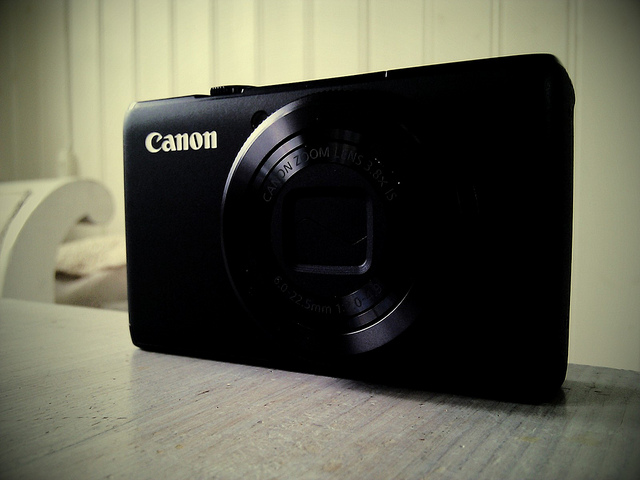 The digicam for people who can’t fit an SLR in their pocket, the Canon S95. Photo (CC-BY) Erik Forsberg.

The New York Times ran a story over the holiday weekend on sensor size calculations and picks for pocket digicams that’s an absolute must-read for anyone who works with pixels. David Pogue is in rare form; this is one of my favorite stories from him recently.

Mainstream tech stories often shy away from the nuts and bolts behind the scenes, but here Pogue has some interesting revelations about sensor size measurement. As usual, a little (odd) history is involved:

It turns out that even if you divide out the 1/2.3 thing, the result — 0.435 inches, for example — does not represent the sensor’s real size. Those decimal fractions don’t measure the sensor. Instead, because of a bizarre 50-year-old convention, they measure the 1950s television tube that those rectangular sensor chips could fit inside of. And that’s the outside diameter.

He goes on to recommend higher-quality pocket cameras. My wager: nifty and convenient as a device like the iPhone 4 and smart Androids may be, convergence devices won’t replace dedicated devices any time in the near future. Phones are delicate balancing acts of competing factors in economics, size, power consumption, and heat, before they even begin to contend with the demands of the phone handset market. And that means they’re subject to the laws of physics.

What’s wonderful about developments in cameras like the Canon S95 is, while your mobile phone may exact some serious sacrifices, dedicated devices may manage greater power in more portable form factors. Like the phone, they make compromises; they just ease the tension at the ends of the equation.

For people looking to capture expressive pixels, that means everything. A device like the Canon S95, while far short of the flexibility or quality of an SLR, can nonetheless provide more extensive manual controls and perform under more varied lighting settings. It can accomplish what you need. I don’t doubt people will continue to make art with phones, too, but having a specialized tool on the go can help realize ideas – inspiring and necessary as is a well-stocked kitchen.

Then again, maybe I’m missing the point. Maybe it won’t be the forward march of technology, but an increasingly-savvy photographic public, that saves the issue of sensor fidelity. At the apex of film photography, average snapshot photographers became more demanding and better-informed about the implements they used. That took a huge dip in the opposite direction as all of us became used to digital. Perhaps the pendulum will begin to shift the opposite way – provided journalists in the generalist press, not just the specialist outlets, point the way.

STATE OF THE ART | Sizing a Sensor: No Easy Way [New York Times]

In the opposite direction, I’m also intrigued by low-fidelity digital; more on that after I get time to play with the SuperHeadz model from Santa. And once I manage to get on a non-canceled flight.

Looking for the Overlooked: What Was Your Favorite Music of 2010?