Why iOS' Problems with Free Video Won't Spread to Android, Most Other Platforms 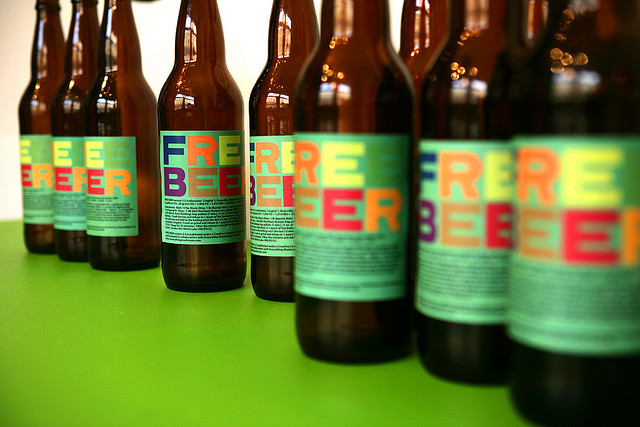 Free as in beer is a great concept, too. Photo (CC-BY-SA) The Art Gallery of Knoxville.

While on the topic of the conflict between the GPL-licensed free VLC video tool (and GPL software in general) and Apple’s App Store, I can’t help but be slightly amused at the common reaction. It goes like this: “hey, isn’t this all in conflict with the spirit of open source?”

Of course, that’s the point. The GPL protects certain rights a developer wants the user to have. Apple’s store imposes specific restrictions. Each party is entirely free to do so; they own the code (developers) or store (Apple). (One possible exception is if Apple’s store runs afoul of legal restrictions governing competition, but that hasn’t happened yet.)

What bothers me more is a false parity set up between Apple’s store and other platforms. Of course, this false parity is especially ironic, since Apple fans routinely talk about the perceived advantages of Apple’s approach, because it is different. Those differences are worth debating – meaning, regardless of where you personally stand, you need to be able to appreciate the differences and understand your choices.

As an example of the false parity, I feel obligated to return to a rather provocative headline from Ars Technica’s Jacqui Cheng in November (whose writing I otherwise thoroughly enjoy, but with whom I disagree here):

Yipes! Guess Android isn’t so “open” after all! Uh… wait a minute. What are they actually talking about? The answer is buried in the article, and it comes from an off-hand comment from Applidium’s Romain Goyet (an iOS-focused developer):

“The matter is of utter importance for VLC in general,” Goyet said. “There’s the Mac App Store coming along. There are Android app stores. It’s very likely that there will be Windows app stores. And all of those (including the Android one) raise exactly the same problem as the iOS App Store. So should the app be decided non-appstore-compatible, it would probably mean a short-term death for VLC.”

Saying “Android,” Goyet doesn’t specify whether he means the Android Market or the Android platform. He’s wrong about both. Apple’s App Store imposes a user agreement that specifies how a user may use the application. That’s the source of the whole problem in the first place. The Android Market does not.

More importantly, even if a developer is dissatisfied with the terms of the Android Market, it’s not the only distribution apparatus. True, some mobile carriers are restricted the installation of applications, but the majority do not, and the platform does not. And Google’s position is clear: as Tim Bray wrote on the Android Developer Blog recently, even gaining root access is supposed to be a feature of the platform. And the fact of the matter is, no matter how much carriers or handset makers decide to misbehave, because you can download Android’s source freely and build it for whatever you want, you’re guaranteed to be able to run the platform and software for it, legitimately, on hardware of your choosing.

(Then there’s the idea that apps will “die” if they’re not on App Stores. On platforms where you have choice, it seems more likely to me that App Stores will die without apps. At the very least, this is far from a foregone conclusion.)

But this is not just about Android. Nor is development just about “openness” or license agreements. As far as VLC for Android, porting to Android is a big challenge, one that’s independent of which license you choose. That’s the nature of development: it’s not exclusively about how open something is, even if that is an aspect that matters to a lot of people.

But there are other platforms, too. For one, there’s Mac OS X. Mac developers are free to establish whatever license agreements they choose to distribute on the platform. That may exclude the upcoming Mac App Store – but Apple themselves have been quick to emphasize that they don’t see the App Store as the exclusive distribution apparatus on the Mac, in the way that it is on their mobile platforms. And very often, other methods on the Mac may be more convenient. Those issues transcend even the question of whether to use a BSD license (which is compatible with iOS) or GPL license (which most likely is not).

Conflating the particular obstacles on Apple mobile platforms with these other platforms and stores is simply inaccurate. Apple’s Steve Jobs is fond of saying that the market will choose. That goes for developers as well as users — even open source developers.

As the recent work with Kinect has demonstrated, free technologies can directly impact the freedom of artists to explore new ideas. They don’t do so exclusively – we see lots of great work built with proprietary tools, too – but they’re an important part of the landscape. That means it is worth paying attention to how this landscape evolves. But users and developers do have a choice, and just because app stores are spreading doesn’t mean that free software is going away.

As Apple Pulls GPL-Licensed VLC, The Developers’ Version of Events, What it Means for Free Video