As the level of knowledge and expertise in visual expression and science continues to explode, so, too, do gatherings on these topics grow in importance. Allen Bevans writes to bring readers’ attention to a call for works for a seriously sophisticated conference in Vancouver:

I’m a long-time reader of both CDMs, and I also happen to be co-chairing the Art track of the Computational Aesthetics 2011 conference, which takes places August 5-7 in Vancouver this year (just before SIGGRAPH). The conference goal is to build bridges between the Arts and Technology communities, with a special focus on visual art and related computational tools. Specifically, we are soliciting artworks and papers that emphasize the role of software creation as an aesthetic cultural activity. The call for participation is here:

The theme is broad – “the role of software creation as an aesthetic cultural activity” – and the larger categories are relevant to Motion readers and the work many of you are doing:

That’s a profound question, what cultural and aesthetic impact software making has. If you’re wondering what kinds of topics have been covered in past, you can find backlogs at:
http://www.computational-aesthetics.org/

Last year’s program leads down a topic that spans photography, lenses, the science of perspective, and the history of art. If you’re ready to jump down the rabbit hole – or fly off toward the vanishing point – there’s a fantastic set of resources along with the paper last year on the topic of the Pannini Projection. (Mmmmm… pannini.)

The video at top explains how the clever use of projection – and lessons from the techniques of painting – could facilitate “ultra wide video.”

ALS1-demo presents a 30 second HD video clip, taken with a Canon EOS 7D, in 3 different projections. First, as shot with a 10mm fish-eye lens, horizontal field of view about 125 degrees. Next, reformatted to Panini projection with Panini-Video, same field of view. Third, reformatted to rectilinear projection, cropped to about 110 degrees wide. Finally, the Panini clip again.

The Panini version is the most natural looking of the three. In the fish-eye view, the curvature of straight lines is obvious, and things at the edges of the image seem to ‘writhe’ as the camera moves. The rectilinear view shows nice straight lines, but the edges are noticeably stretched and seem to ‘stream’ with camera motion. This would be even more obvious in the full width image (which would not fill the frame vertically). The Panini view keeps verticals straight, and is relatively free of both ‘writhing’ and ‘streaming’ effects. It looks more like an ordinary moderate wide angle view, than the hyper-wide-angle view it actually is.

See also an image of software, below, from the same article.

Now, this sort of heavy math may not be the cup of tea of everyone here on this site – at least not in terms of what you might present – but I can imagine the conference could have lots to offer presenters and audience members alike, and getting the call here on CDM might even expand the breadth of their programming. Have at it!

And, in the meantime, now I want to explore the possibilities of perspective. 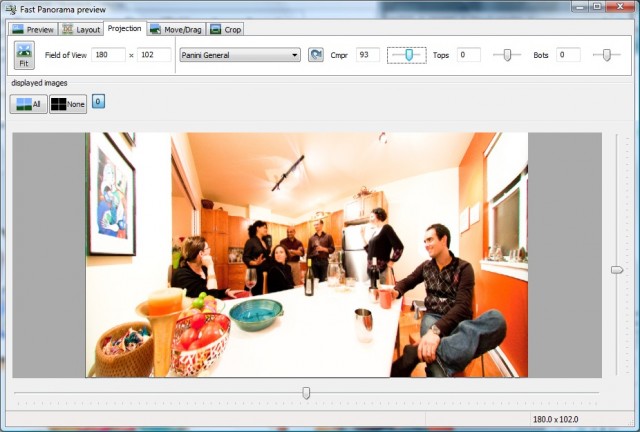