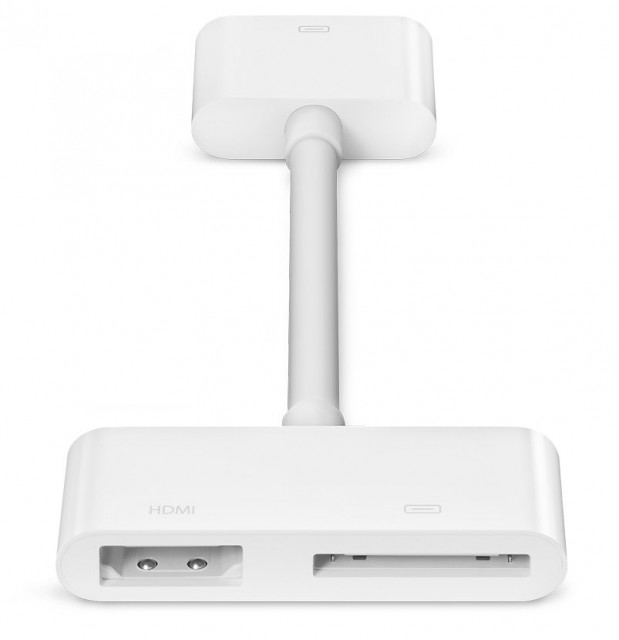 Apple’s new Digital AV Adapter, announced today [see Apple Store link], is pretty darned near perfect for the iPad performer. It might just be better news for the readers of this site than the iPad itself. At US$39, it includes both HDMI and USB ports – meaning you don’t have to lose one to get the other. It’s also compatible with not only the new iPad 2, but also the original iPad (along with the iPhone 4 and even the iPod touch).

An Apple spokesperson confirms to CDM that the adapter will be available on March 11. Mirroring, says Apple, is an iPad 2 feature: you’ll now be able to mirror any output from the device on the newer-generation hardware. (It’s possible to mirror software now on both iPads, or even to treat the external display as a separate screen – ideal for live visuals. But it requires extra code.) The original iPad also supports only 720p, not 1080. But that’s a small complaint – both tablets are now viable live performance sources for visualists.

Additional coverage: Apple’s new Digital AV Adapter: what it will and won’t do

The iPad 2 itself brings enhanced graphics performance and a better GPU, on top of the dual-core processor – similar to the generational spec improvements on competing tablets, and equally tantalizing.

Meanwhile, on the Android side, Honeycomb tablets are bringing similarly fantastic news. The Motorola XOOM and its dual-core NVIDIA Tegra 2 chipset have some powerful display features. (See recent tips.) I haven’t gotten hardware to test for the XOOM, but I can confirm from the SDK that developers can choose to allow mirrored output out its HDMI port, or work with separate controls on the tablet and output via HDMI.

This means with any of these tablets – iPad, iPad 2, or Android Honeycomb – you could now perform live visuals off a tablet and not only a laptop. With OpenFrameworks available for both platforms and Processing available on Android, atop optimized video playback capabilities, and excellent multitouch input, these are all looking like appealing performance machines.

Now, if only we had an HDMI mixer worth using. Two tablets, one HDMI mixer? One laptop, one tablet, one HDMI mixer? It’s a shame to have all that horsepower and use the thing as just a dumb controller. Unfortunately, with most of the market apparently stuck in the 1990s, an off-the-shelf product seems out of the question. Live visuals badly need an expressive, inexpensive, DIY HDMI mixer. It could finally liberate live visuals and bring it into the 21st Century. Thoughts, gentle readers?

Cooking up Sounds, with One Synthesizer Every Day