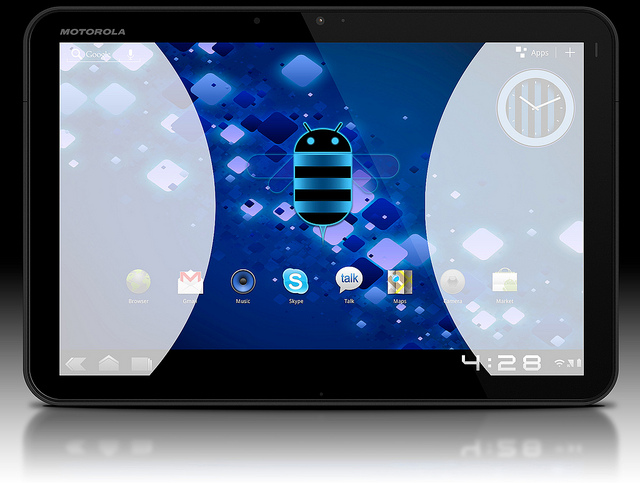 Clear all the tablet hype away, and consider this: if someone told you a few short years ago that you could soon have a flat computer with HD screen and HD output, multi-touch interface, two cameras, and real OpenGL graphics, you would probably have fallen out of your chair. If you then said it’d also run Processing and OpenFrameworks sketches, some nerds might have actually passed out. And now it’s here. Most of the debates in tech circles center on, like, normal people, not people who fall in love with computing platforms for their artistic and psychedelic potential. Shame, that.

So, in that spirit, let me be the bearer of the good news from Google’s IO conference. Here’s the news that really matters:

Android now supports USB hardware. As I wrote yesterday on Music, Android now finally adds hardware support. On all 2.x and 3.x devices, this includes USB accessories which can be prototyped with Arduino. On all 3.x tablets – and possibly some phones, too, though I can’t confirm that – you also get proper USB host mode, which means the ability to plug in joysticks, gamepads, and even custom USB hardware. Best of all, none of this requires nasty legal agreements or NDAs or approval. (Gee… it’s almost as if you own the hundreds of dollars of hardware you buy.)

One specific item that I learned later, though —

You can use external cameras. When I first read this, I thought we’d actually be able to use external video cameras, which would be terrific and computer-like. I was wrong. In the meantime, though, you can at least pull photos and videos in a standard way; that’s good, at least.

Renderscript is pretty awesome. It’s not really news, but it was nice to see Android Honeycomb’s Renderscript engine, which lets you do some pretty sophisticated animation and 3D using very small amounts of code. The Android Developers’ Blog covered it back in February, but with renewed focus on Honeycomb in sessions (and the likelihood all of this will be on phones by the end of the year), it’s getting featured more prominently. See demo:

Wireless features. Less covered in the press, but 3.1 will add RTP streaming content transport, and – critical for things like touch OSC controls over wifi – more robust wifi lock and wifi performance, something that’s been pretty dodgy on these kinds of devices both on the Android and Apple sides. (Well, it will be if it works as advertised.)

Processing! Processing didn’t appear in Google’s presentation, but I can say that all this tablet stuff is very good for those of us wanting to play with Processing (or OpenFrameworks, for that matter) on Android. I’ve already heard really good things about Processing tests on the Xoom.

The vision: two tablets and a projector replaces two turntables and a microphone for the live visualist. Or, for that matter, lots of projectors and tablets. The mind reels…

Anyway, such is a preview of the state of things on the Android side of the fence. For more on iOS and HD output, I hope to have an update in a few days. Consider that a teaser.

Also, side note: we also learned Google TV isn’t dead, and we should finally see development – a la Honeycomb – this year. I randomly won a Logitech Google TV some weeks ago, so I’ll report back for anyone interested.

FL Studio Mobile, in Video, to Take on GarageBand; Compare A Pre-iPad Design Idea by stretta