Buckle up and project: that was the mission of a group of art “interventionists”, firing guerilla projections at the public installation of artist Sol LeWitt in Manhattan’s City Hall Park. The weapon of choice itself is one of interest: a self-powered mobile projection rig means live visuals can appear anywhere.

The production team describes the project:

Wikipedia defines an art intervention as ‘an interaction with a previously existing artwork, audience or venue/space.’ Integrated Visions Productions and National Media Services approached the Sol LeWitt exhibition ‘Structures’ in New York’s City Hall Park (sollewitt.publicartfund.org​) with this concept in mind. Utilizing one of NMS’s ProjectionMan self-powered mobile projection units to redefine the idea of guerilla videomapping, the IVP/NMS team was able to line up the template and accurately videomap the three sculptures seen in this video with about 5 minutes of on-site prep per piece. The results are stunning; the sculptures come, literally, to life. [Ed.: Uh — literally, they come to life? That’s terrifying. -PK]

I asked producer Brian Blessinger to tell us more about the backpack projection setup, pictured below:

As far as the ProjectionMan rig, it was designed by our logistics partners at BlueBlast Media and National Media Services. It’s battery-powered and is designed to be fully mobile. The rig is built as a suit that fits around the operator. The 12 volt battery is worn like a backpack. Each battery lasts about an hour before it has to be swapped out. It supports a 2500-lumen HD projector. 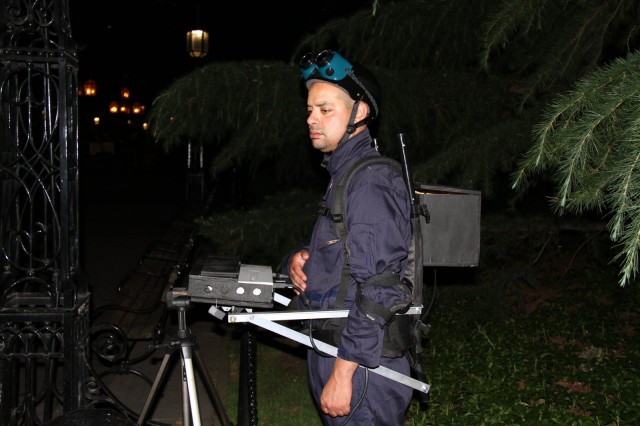 Inspiration: Fluid, Organic Forms, in the Generative Narratives of tsaworks