In a great example of video’s power to tell a story and send a message – particularly when embellished visually – design student Ron “RonConCocaCola” (School of Visual Arts) presents documentation of just how chaotic a single New York City intersection can be. There are some especially bad moves by cyclists, though motorists try their best to be a******s, too.

By summer 2010, the expansion of bike lanes in NYC exposed a clash of long-standing bad habits — such as pedestrians jaywalking, cyclists running red lights, and motorists plowing through crosswalks.

By focusing on one intersection as a case study, my video aims to show our interconnection and shared role in improving the safety and usability of our streets.

The video is part of a larger campaign I created called ‘3-Way Street’. Please see blog.ronconcocacola.com for more details.

There’s potential to go further with this. The evocative, highway/cloverleaf-style visuals in his poster suggest possibilities to adapt this to a motion piece. I’d love to see a visualization of the paths of all those wrong moves. “3-way” is a reference to the fact that bikes, cars, and people share city streets, but in this case, wrong-way bikes in particular turn road directions upside down. 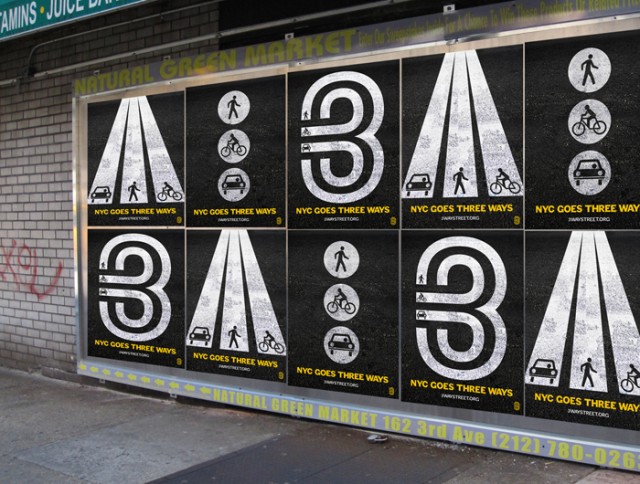 The accompanying poster designs. Anyone else want to see this animated?

Whether in live visuals, motion graphics, or installation, though, it’s great to remember the power of the technology to say something. I know I have a different perspective on the streets now after watching this birds-eye view.

It’s actually coincidence, by the way, that we have this string of New York City posts; while I live here, a number of those I find online. I’m guessing maybe summer is inspiring people to do documentation?

Entering the Third Dimension: One Evocative Take on Real-Time Music Creation with a 3D Interface

design
Atari, at 50, leaves a legacy of electronic imagination in visuals and sound
design
Check this fanciful “old-school” retro tracker hardware and a cute groove
video
All the big Apple news from WWDC, at a glance
design
Houdini’s tricks: inspiration and tutorials for the essential free-to-start visual tool