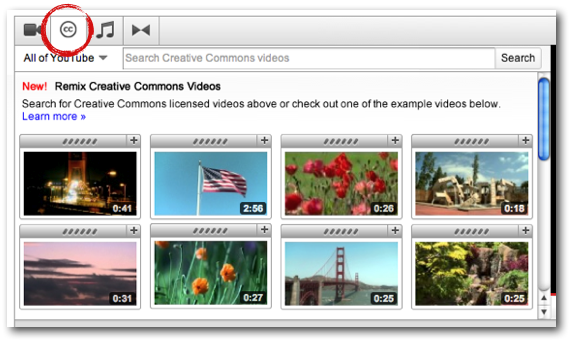 VJs and visual artists remixing video have long simply grabbed what they want, when they want it. But now, the community increasingly faces a choice: will it play by the rules? The payoff could be more than moral good will or karma. If visual artists begin working with Creative Commons-licensed materials, they’ll add the incentive for other artists to remix their own work freely. And following official rules could mean the freedom to share your creative output without having to worry about navigating takedown notices or angry rights-owners. Given the importance of posting showreels to getting gigs, that could be a compelling reason to use Creative Commons licenses both when posting and downloading.

YouTube this week announced, at long last, it was supporting Creative Commons licenses officially. If you’re looking for CC-licensed content, you can now search YouTube with an ease previously reserved for rival services like Blip. And if you’re a creator, you can now publish your works under a CC license more explicitly – and benefit from all those searches. Having seen the power of this on Flickr, I imagine the results could be significant.

YouTube isn’t just taking a “build it and they will come” attitude to this, either. Integration with Creative Commons is the deepest we’ve seen yet on a major service.

It’s a good first step, but it’s likely that the implementation here will prompt more demands from the YouTube community. On one hand, there’s reason to applaud the step away from complex Creative Commons licensing options. As I’ve noted before, the “non-commercial” restriction, while tempting, can be vague to the point of making it impossible for anyone to make use of the license. I’ve written about that issue on Create Digital Music:

Creative Commons, CBC, and Music for Commercial Use: Addendum

Generally, though, the remedy for artists is to use ShareAlike, which requires people reusing their work to use the same CC license. Without that requirement, it’s possible for someone to exploit a CC-licensed work without giving anything back beyond attribution. I’ll also be curious to learn whether organizations like Al Jazeera use the same permissive license. (If they do, and they provide ample high-quality content, it’ll be harder to argue the rest of us can’t do the same.)

Regardless, for fans of Creative Commons wanting to make use of CC-licensed materials, the change should be welcome. If you explore this license and the new YouTube functionality, let us know about it – and how it works.

More on YouTube’s blog:
YouTube and Creative Commons: raising the bar on user creativity [Broadcasting Ourselves: The Official YouTube Blog]

Thanks to Richard Lawler for the tip.

youtube
Watch this video with tricks to get more out of KORG’s west-coast volca modular
visualistVJ
Looom for iOS makes animating like playing a musical instrument, now with major update
videovisualistVJ
Slimshader packs GPU shaders into your Eurorack for live visuals, thanks to RasPi
youtube
Synthesized Sounds of the Sea explores the undersea world of synthesizers