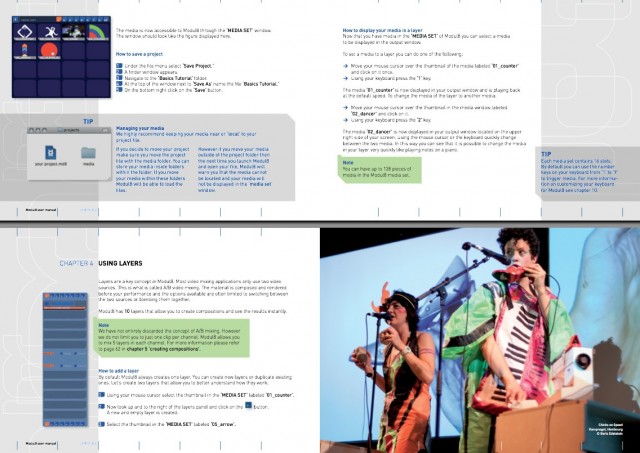 I wouldn’t normally rave about a manual, but — this is how it should be done. Kudos! (Well, that and the one time Edirol bizarrely did a set of ninja videos for motion dive.tokyo.)

Modul8, the popular Mac live video tool, got bumped to version 2.6.3 this week. But the most important change is a fantastic new manual for the software, buried at the bottom of the changed feature list:

– Syphon SDK Public Beta 2 – fixed an issue with OS X 10.7 Lion
– Fixed some issues with alpha channels when using shared textures in Syphon
– Fixed an issue with media when using ‘8 bit’ filenames such as ones that use Japanese characters
– Rendering Logical Record using an Alpha Channel with a codec that supports Alpha Channels
– Added menu that links the to Online Module Manual (see below for details)
– New PDF user manual

What’s so great about a new manual? Basically, it’s been rewritten to focus more clearly on artist tasks, from the beginning of the visual workflow as you import media to layering and controlling onscreen compositions to recording. Also, rather than simply go through those tasks in dry fashion, there are real-world visual illustrations of how controls might be used (provided by talented live visualist Ilan Katin in most cases, as near as I can tell). The manual is also nicely interspersed with documentation of people using Modul8 in live contexts onstage. It sets a nice, new bar for online manuals.

Note to self: someday, we should again tackle the problem of making a general guide to live visuals and VJing – particularly as past efforts predated some significant shifts in how live visuals work, including greater use of live motion control and computer vision, three-dimensional and generative graphics, and projection mapping. It’s a daunting task. In the meantime, it’d be great to see more tools make documentation like this. 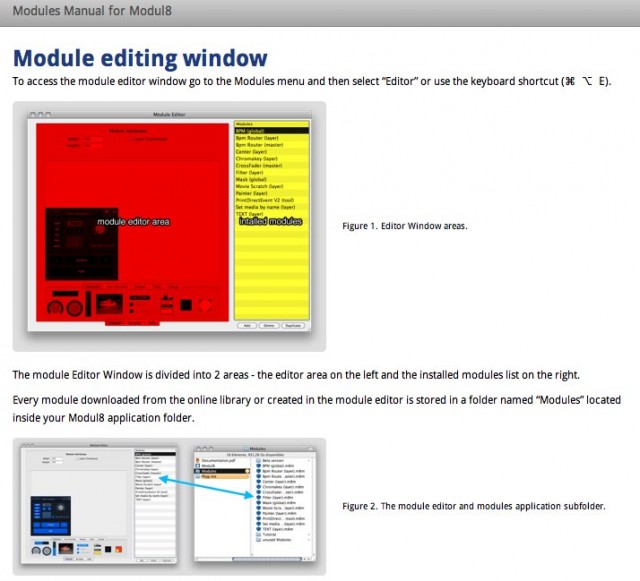 Ready to make Modul8 your own? There’s a more advanced manual for creating custom modules, too, online.

So, that’s on the beginner/intermediate side. Modul8 also now has some extraordinary documentation of a powerful feature – the ability to make your own modules, even without code. (If you do want to delve into a few light lines of Python, you can go that route, too.)

There — did I give you something to keep you busy with the remainder of this weekend?

Music in Space and Time: Wild Geometries and Sequencing in Iannix, Free