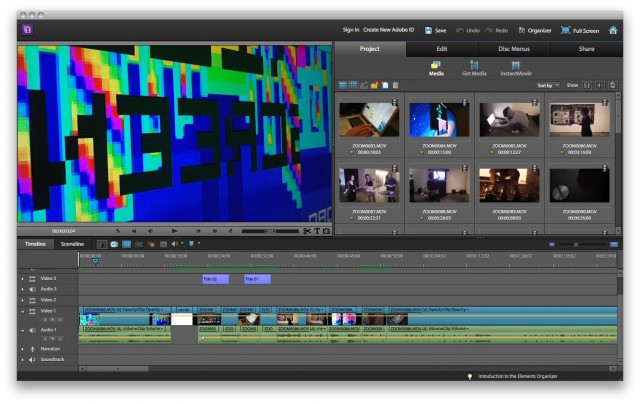 Click “Timeline” instead of “Sceneline,” and Premiere Elements 10 becomes a more conventional editor.

Macworld has published the review I wrote of Premiere Elements 10. Windows users for some time have enjoyed budget-priced video editors from Sony and Adobe; the Mac user base has had only Final Cut Express. Then, Adobe brought their Premiere Elements to the Mac, complete with native AVCHD editing – something Apple’s editors lacked (at the time requiring time-consuming transcoding).

Now, Apple has ditched Final Cut Express – Final Cut Pro X is its only option. If you weren’t sold on FCPX, or if you don’t feel like shelling out for either it or Premiere Pro, that makes Premiere Elements 10 an intriguing choice. It’s only a hundred bucks, and it’s surprisingly capable. As I write:

But if what you really want is a powerful editor that gives you room to grow— without paying too high a cost in either dollars or complexity—Premiere Elements really shows its colors. Yes, Adobe seems to hope this is something you’ll use to make more interesting video slideshows of your Facebook friends. But what they’ve come up with is a powerful editor with extensive color controls and native AVCHD editing, with quick ways of getting videos online or in HD on disc.

That’s all the more meaningful as FCPX hasn’t won over everyone.

On Windows, Sony’s bargain-priced versions of Vegas remain strong choices, and without necessarily requiring you to learn any beginner-level interfaces. But I have to say, I do like those color controls and photo pan-and-scan in Premiere.

Also, thanks to my editors for keeping the “Dr. Jeckyl and Fluffy the Bear” subhead. This marks the second time for Macworld this summer I get to cover a perhaps-overlooked product — last time it was Motion. And they’re each $100 or less.

I’d still get Premiere Pro over Elements if possible – the editing interface is more familiar, there’s gobs more stuff there, and even simple things like exporting is more direct. But for a bargain price, Elements does far more than I would have expected, and it is absolutely usable in a pinch.