To skip to the punchline: Final Cut Pro X appears to at last do multi-camera editing, and do it right, as seen in the video posted by our friend Nilay at The Verge.

To anyone who read deep conspiracy theories into the release of Final Cut Pro X, perhaps it’s time for a gentle reminder. When building massive, complex tools, sometimes developers get it wrong – even if they happen to be Apple. Final Cut Pro was desperately in need of a rebuild, constructed as it was on deprecated, 32-bit-only libraries. That rebuild, charitably, didn’t go as smoothly as some might have hoped. Final Cut Pro X was missing critical features and adopted a user interface paradigm for editing and file management that at best required adaptation and at worst left users looking for alternatives.

But I’ll go out on a limb here and say anyone who believes Apple wanted to alienate their pro market is simply off their rocker. Now, the effect may have been to do just that, but it was unintentional.

It was also clear from the release of Final Cut Pro X that some of those features were to be added back – made even clearer when Apple representatives publicly said as much explicitly in the days following X’s release.

To put it another way: Final Cut Pro X was bold, entirely new, and just plain unfinished. Some folks out there are using it, but in its initial release, Final Cut faced stiff competition not only from rivals like Premiere, but from Apple’s own, trusted Final Cut Pro 7.

With 10.0.3, we get a first look at what a finished version of Final Cut Pro X might be like. New in this version come both features that users found sorely missing, and some new ideas that we haven’t seen in desktop Mac editors before. In brief: 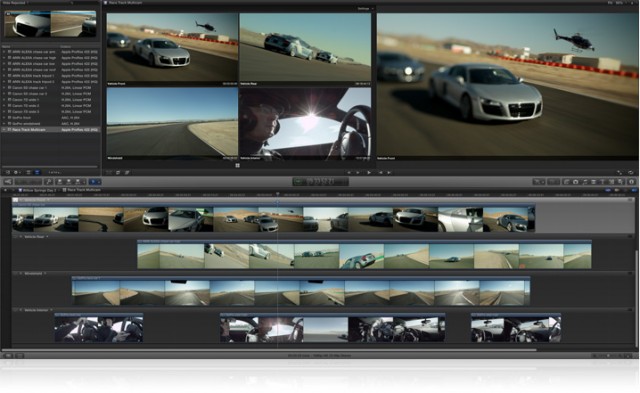 Apple seems not to be content just to add back those missing features, but to do them better than competitors’ implementations. Let us know if you’re testing 10.0.3, and we hope to do the same.

Reconnect media and exchange files with third-party applications using a robust relink interface. Select media that has been moved or modified, or locate clips that have been transcoded, trimmed, or color graded by third-party tools. Then easily relink to your Final Cut Pro X project or Event.

Yes, by “robust,” this really means “now actually usable.” Media relink was for me the biggest deal-breaking issue in X, causing maddening file management headaches as Apple tried, apparently, to reinvent how locating files work. I’m eager to try this particular fix more than any other.

Also, crucially, Apple is now pointing to a third-party migration tool for FCP 7 users in the App Store:

In a relatively rare move, Apple even has a page explaining what they’ve improved:
http://www.apple.com/finalcutpro/software-update.html

And check out the migration tool:
7toX for Final Cut Pro