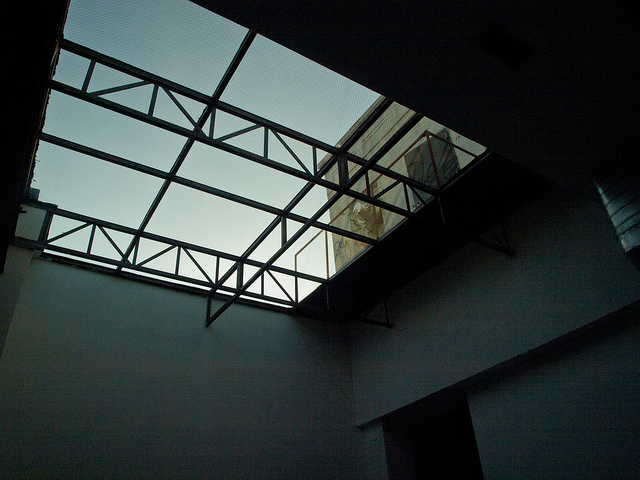 48 hours. Nerd-chic tech from Kinect to Maker Bot. One space in Brooklyn’s Bushwick neighborhood. DIYers in New York recently descended to complete an Art Hack Day. The resulting projects were Mr. Wizard-meets-science-fiction, made into reality, concocted using materials that extended to JELL-O and balloons. CDM contributor-at-large Sofy Yuditskaya was an organizer and there, and she covers the event for us. Nerdy, art, fantastic. Read on… -Ed.

Last weekend, I had the pleasure of helping organize and participating in Art Hack Day, a 48-hour hackathon held at 319 Scholes, a non-disciplinary gallery and performance space in Brooklyn focusing on digital arts and experimentation. It was a seat-of-your-pants, DIY experience, from inception to closing party, a proto-institutional moment spun from the collective imaginations of artists, hackers, enablers and instigators. It was an example of what happens when people come together because they are inspired and passionate, each bringing what they can to the re-purposed warehouse to create a greater whole. 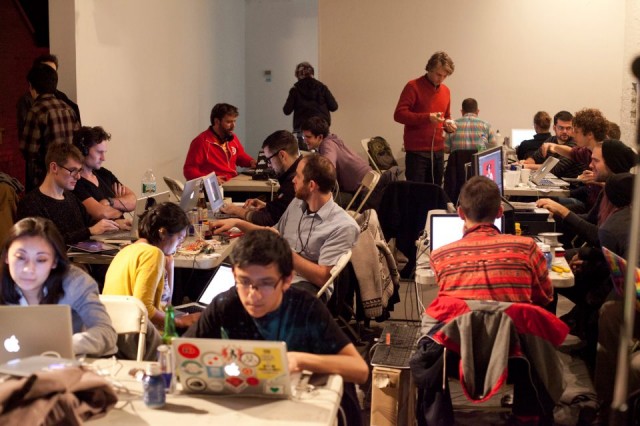 Paving the way for the event, the organization of Art Hack Day had a very organic feel to it — everyone (curators, staff, and participants) pulling what resources they had, and taking on the responsibilities they could muster, rather than executing a set, institutional program. There was a corporate presence in the form of sponsorship, but branding was kept to a minimum. Local businesses were called upon for all the meals. 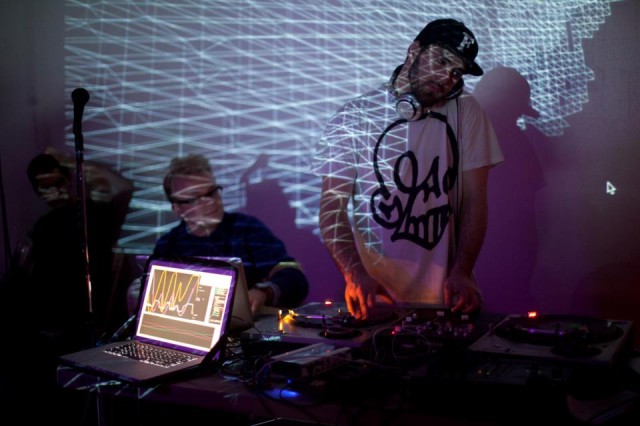 This Art Hack is the third in New York, preceded by Eyebeam’s Art Hack Weekend and Rhizome’s Seven on Seven. Unlike those events, though, it had no concrete incentives and no winners. The incentive resided in creation, exhibition, play, partying, and participation. Walking down Scholes Street in industrial Brooklyn, it can be hard to imagine that going through an unassuming door would gain you entry into a space full of the techno-cultural industry, producing the funny, odd, subversive, and sometimes surreal.

There were too many projects to write about them all; I’ve selected a few that pertain to motion and sound, with some exceptions made for the visually arresting.

Scratch Markup Language, seen previously on CDMusic, is a format for describing turntablism, a step towards a non-invasive way to record, analyze, share, and re-create scratch performances. Check out the website, and the project on GitHub.

Glad to see that SML got put to use quickly: at the night of its premiere, a video game, “Aliens that Look like Skillrex,” was playing on the stage.

From the project page:

The backstory: Aliens are trying to communicate with us through dubstep, we interpret these actions as hostile and go on the offensive. Destroy the aliens.

How it works: The DJ controls the boss ship. We are receiving the ScratchML data in realtime from the turntables, so his/her actions directly affect the bullet patterns and movement of the ship. As the player you can dodge and shoot back. It’s a head to head battle of player vs. DJ. Others can participate as well: the Twilio integration allows people to text a number if the DJ sucks, and their text will appear on screen and damage the boss ship.

A video of Joe Salina killing the DJ at the closing party:

Bot Zoo was installed in the bathrooms. It took me a long time to figure out how and why there seemed to be a disembodied voice reciting absurdist poetry, all from within an aural space I knew from studying the plans of the space did not exist. As it turns out: “[Spam] Bots are creatures that evolve along with technology. They are ignorant of the messages they carry but it is the only way they can proliferate.”

A quadrophonic installation of sound and video, “Point, Line, Surface” plays with the idea of the playhead in audio and the scan line in video processing. We have built on top of and transcended the mathematics of computing, but that mathematics is at its core discrete and linear. This installation looked into an aural, visual, and spatial experience of that fact.

The playheads of both were driven by pix_openCV’s library for Pd [Pure Data], using blob detection to determine from where in the image or waveform each playhead should start scanning, at what rates, and when they should jump back to restart the loop. The piece ended with a techno-occult summoning dance in the wee hours of the morning. Appropriate to such matters of the techno-occult, of course, all camera memories were full or batteries dead by that time. 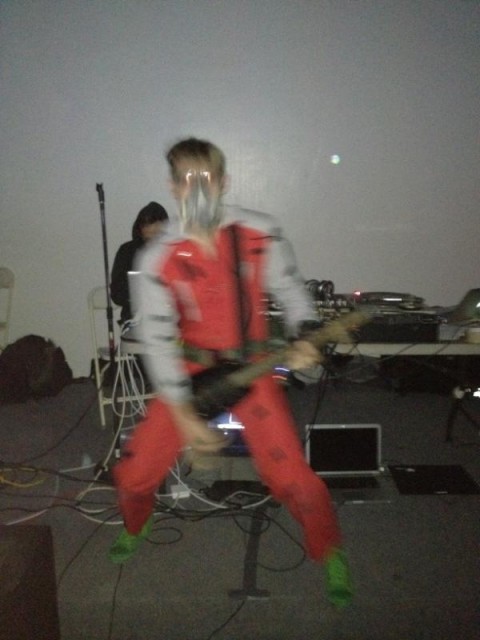 Dan Wilcox ported his Robot Cowboy project to run on ofxPD and ofxLUA on an iPad.

Dan Wilcox explains:
“My old project was about embodiment of computer-aided performance through wearable computing; now that tech has caught up with mobile machines, I’m updating the system. Now I can do wearable as well as mobile and utilize the touchscreen but, as before, it’s not about a single output, but a platform for exploring ideas in performance and storytelling concepts.”

At Art Hack Day, an alpha version of the new robotowboy 2.0 music system was developed as an app. Dan built the app using OpenFrameworks, ofxPd for sound, and ofxLua for visuals on an iPad. Combined together, they basically make something like RjDj [the https://github.com/danomatika/robotcowboy

“No Clipping” is a lovely mood video piece by James George and Alexander Porter. It took advantage of the new, unpowered Xtion PRO (Kinect-like sensor made by PrimeSense and Asus) to go mobile. They overlaid input from the sensor and a DSLR, re-shifting the camera angles in post for a most uncanny effect, walking through walls, thanks to the undifferentiated nature of the point cloud.

The new MakerBot [3D printer] was present, showing off its new bio-degradable plastic and enlarged replicator. The attending representative of MakerBot Industries suggested extending the rails on the vertical axis, allowing an even-larger print area — just throwing that out there to you makers!

Nova Jiang’s and Olaf Sundstrom’s hand-coated MakerBot prints in latex to create balloons. The latex was mostly too thick for a balloon, but looks extremely organic, a clean, chemical growth betraying the hand on top of lovingly-printed, machine-generated forms. 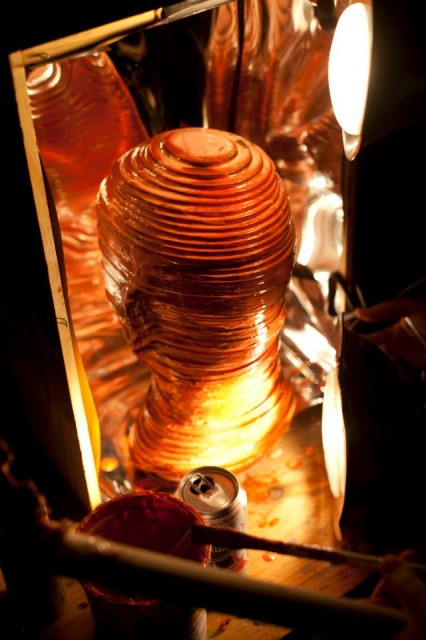 Finally I will leave you with Jello City by Hethre Contant, in her words. 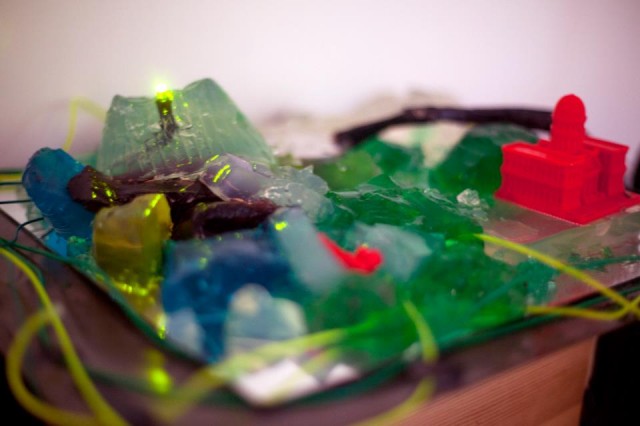 The Jello City was the result of tremendous urban planning. Its state-of-the-art buildings, a marvel of modern architecture, were networked with a powerful radio station built with Exitrip technology [http://www.exitrip.org/ ].This radio station served as a two-way communication apparatus for the city, providing both education and entertainment. Nikola Tesla once visited the Jello city to test out his Earthquake Generator (recreated for Art Hack through a metal plate and a powerful speaker) (http://www.rexresearch.com/teslamos/tmosc.htm), which caused the Jello City to jiggle and collapse. All that remained of the Jello City was its radio station, broadcasting its loud emergency alert warning back to the collapsed city. Among the boisterous tone the following lesson could be heard, “No matter how much you plan, everything will be destroyed.”

This message surreptitiously describes the nature of the art hack. You plan, you prepare, you build, you destroy, and in the end, you are left with something for which you could not have imagined. 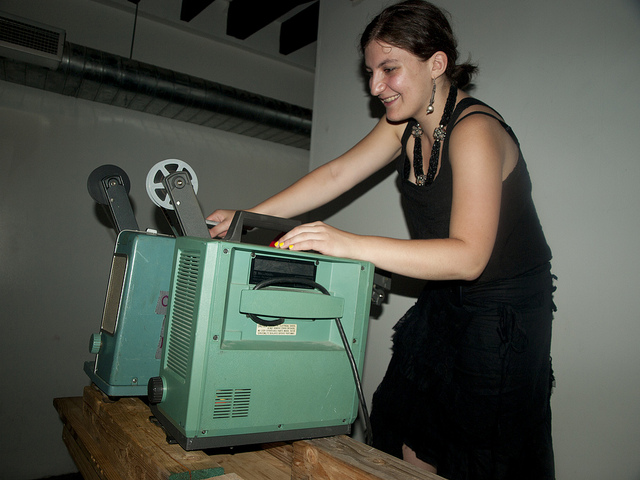 Our contributor, Sofy Yuditskaya, a talented artist in her own right, at 319 Scholes in 2010, creating some optical/chemical motion. Photo (CC-BY) Shameel Arafin.
Share
Tweet