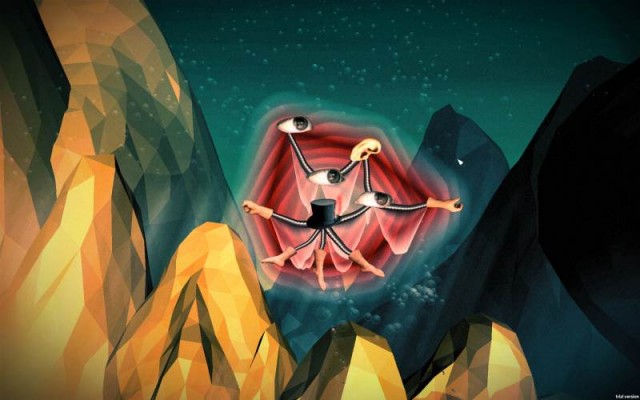 Zurich-based artist Mario von Rickenbach is a fine representation of what the new generation of visualists looks like. Adept in code and art alike, turning his talents in illustration beyond pretty pictures to experimental game design, he’s part of a breed of artists who expresses visual ideas in interactive, live form. Those real-time game engines are moving feasts of animated art, so it’s little wonder he takes his game engine of choice (Unity) and applies it to live performance, too, as he did in projections for a sci-fi musical theater work at the National Academy of Chinese Theatre Arts in Beijing.

Game or theater – or game as theater – his non-linear live animation looks brilliant. It’s best to simply show it. Remarkably, a lot of this work is undergraduate student work – even as it rivals some of the best-looking games out there.

Via the A MAZE Festival, which will bring machinima to a screening at Berlin’s epic Campus Party Europe. (It’s hard to describe that event, other than to say it’s what happens when a humble LAN party grows into an international geekgasm of technology in all forms – the sort at which the inventor of the Web makes an appearance.)

EMC (anyone for a game of nuclear physics?)
etterstudio.com/emc
Unity, Blender
with Etter Studio

Dave Smith Mopho x4: All Analog, 4-Voice Synth For Just Over a Grand

artists
The best way to integrate Ableton Live and Eurorack modular – for any rig
artistsinspiration
Watch live sets from Superbooth21: Jamaica Suk, JakoJako, Yann Tiersen, Pole, Bloody Mary…
artistsinspiration
Dark, dreamy dub techno and ambient music: Ukraine’s Danny Skripp needs your support
animation
May the 4th be with you, in a new documentary on the sounds of Skywalker