Δ Aurigæ from depart on Vimeo.

Depart produces undulating geometries, sacred and mystical and surreal, that vibrate with sound and music. Earlier this year, I looked at Eric Wahlforss’ project (as Forss), which included their visual contributions in the iPad app and live show, an audiovisual opus:
Church-Inspired Electronic Music, in Album and Interactive, Gothic App, from Forss [Listen]

Here’s the Austrian media art and design duo, Leonhard Lass & Gregor Ladenhauf, taking on installation in Δ Aurigæ. (Full details below.) It seems a journey into a world partly imagined by Dada and Dalí, partly by Paul Laffoley … mixed with Tron. Meshes are exposed like Holodeck bugs and then billow with the wind and shatter into clouds of dust. Working with bleeding-edge custom code created in environments like vvvv and OpenFrameworks, they manage elaborate visual interactions, often in real-time. But geometry always figures in the fore, often with an air of mystery – a modern-age Pythogorean cult.

I hope we can see their new work, “Cloud Chamber Diaries,” seen in the image here. (Some tantalizing render tests below.) You can follow this and other recent works at their blog:
http://depart.at/rheology/ 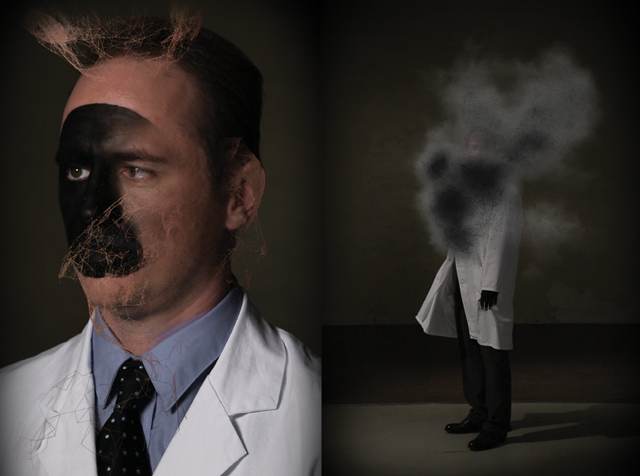 This video is a cutup of excerpts of the performance/installation “Delta Aurigae” at sound:frame festival Vienna.
Delta Aurigae is an installation which deals with the periodic coalescence of opposite aggregate states, based on and structured by the rhythm of a double star system like the constellation Auriga.
A world populated by meanders and monoliths, meteors and menhirs that draws inspiration from ancient astrology which was using rock formations and natural objects to decipher the universe and measure it’s cycles.
Delta Aurigae is a hybrid between installation and performance, a stage with a life of its own. In idle mode it shows a slow and majestic flow like a glacier, where fringes blur and relations vanish.
A monolith itself, Delta Aurigae is a 4.5m high triangle with a real-time projection.
Made with VVVV & Reaktor.
o-O-orbiting the delta skelta
In merry barycenter go-rounds.
Let’s build a whole city of glass houses, only a stone’s throw away
To regard the light night sky, dive drown
Dissolving vis-à-vis-viva equators
In our monolitheral observatory.
We will, we will…
more here
depart.at
Thanks to: sound:frame, Michael Grossauer & polypod, woei, joreg & vvvv, leo & ben (Bildwerk), Pomme, Gerald Moser, Romana Kleewein

And some early looks at what “Cloud Chamber Diaries” will bring:

CCD – interactorStudy 7 from depart on Vimeo.

CCD – cloudStudy 3 from depart on Vimeo.

From the videos’ descriptions:

Study for Cloud Chamber Diaries and first encounter with OpenFrameworks on windows7.
Many thanks to the great ofx examples by Kyle McDonald and James George!

Glyph from depart on Vimeo.

Glyph is a projection sculpture with references to ritual monuments such as obelisks or stelas. It deals with cyclic change and constantly regenerates itself. An alphabet based on fundamental geometric shapes (rectangle, circle and triangle) acts as a communication device as well as a pure aesthetic element. All texts displayed are permanently evolving and restructured based on linguistic rules.
The installation runs in realtime – the video shows a random segment recorded at schmiede 2011.
Made with processing & reaktor
supported by Subnet AiR, Schmiede, Polypod, Waldschuetz Photography, Show2Go, Holzcraft
I
glyph cleavage
like man-high menhirs
one line unbroken
heading for a fold
more here: depart.at/rheology/?p=916

Windows
Ukrainian artists jam live today in Endlesss as Web3 fundraiser: Tolkachev, Kotra, Zavoloka, more
audiovisual
Catch Berlin CTM Festival talks, music, and audiovisuals online, from anywhere
effects
MOD Devices made a guitar synth you can actually play like a synth – so your guitar is the CV
inspiration
Vangelis has died at 79, as the electronic music world mourns