In the world of VJ apps, CoGe is an intriguing upstart – a semi-modular design, built around integrating Quartz Composer patches, lets you create customized VJ rigs on the Mac. Hungary has produced both the app and a passionate community of users. It’s time to catch up with this app, including a round of new features available last week in 1.4, work from the visual community, and tutorials on how to get started using it.

CoGe has been a commercial app for just a year, but a stream of updates has enhanced its functionality. New in 1.4, from the 26th of September, in addition to UI enhancements and improved reliability and stability:

See the full details:
CoGe 1.4 With A Bunch of Enhancements [CoGe blog] 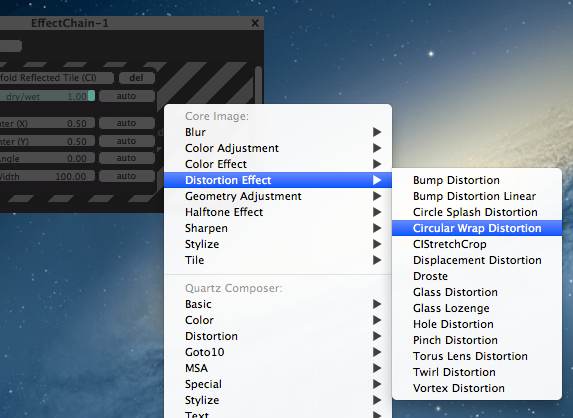 CoGe is all about having lots of effects, via Core Image and Quartz Composer – and version 1.4 makes that doubly so.

So, that’s what’s new in the tool. Now let’s actually see how to use it – and what it can do.

None of this is meaningful without seeing actual visual work. So, I asked developer Tamas Nagy to share some of the work people are doing with CoGe, and selected a few of my favorite examples. They give you a sense of what the tool’s artistic capabilities can be.

celloBeatPulse is another A/V creation by the same artist, produced entirely in CoGe, also recorded in Syphon. The project was performed by Bios and Vargasz at LPM 2011, VisionR 2011 and VisualBerlin 2010. More:

For a look inside CoGe and how it works, the tutorials are your best bet.

The full album of tutorials is on Vimeo:

But here are a few of my favorites, in that they convey some of the software’s most compelling functionality:

CoGe 1.0 – Using the Sequencer from luma beamerz on Vimeo.

And if you’re using the software, we’d love to hear from you – and see your work.

Rocking Out with Sponges and a Houseplant, and Other Handmade and Circuit-Bent Wonders [Videos]

MacSoftware
The best Cyber Monday deals you can get now on synths, plug-ins, and more
MacSoftwareupgrades
MadMapper 5.2 is here, with more lasers! (and DMX CSV, Xbox controllers, and Kinect)
Software
SAND hosts your iOS plug-ins, sequences them with patterns, records them
MacSoftware
The very best Black Friday and Cyber Week deals on music and motion – a running list