The human element in visual performance can apply to mass ensembles as well as soloists. So, while this video has already made the blog rounds, if you missed it as I did, it’s relevant in context of yesterday’s discussion of adding a human to projection mapping. 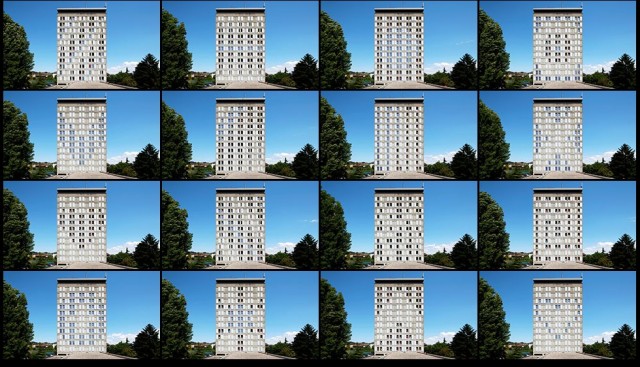 Don’t miss the behind-the-scenes video that begins roughly halfway through; that story is almost as compelling as the end result itself. (See today on CDMusic for the reflection that sometimes the exercise itself, not the output, is the message.)

The work is powerful on a number of levels. Involving those people turns inside out a lot of projection mapping, which tends to be cold, producing architectural environments that are abstract and notably missing in actual people. It also humanizes the process of manipulating the building as pixels itself.

Compare, by contrast, a video that hit my inbox today, from Apparati Effimeri. This tends to the no-humans-around context I mentioned. At the same time, in a demonstration of the many possible tradeoffs available in different design decisions, it also runs out of animation possibilities much less quickly. Here, “Breakout”-style (the game), you get some delightful manipulations of the rectangular array of windows on the building facade. These come alive as they shift between that rigid rectangular grid and other possibilities, proving even a fairly typical architectural grid can be fruit for inspiration. It’s the opposite of the video above in many respects, but it suggests some of the opportunities in that opposite:

And while the cliché around projection-mapped projects is that the things look better in documentation videos than in person, this space looks positively epic.

Painting with People: Pac-Man and Other Human Pixel Projects by NOTsoNOISY