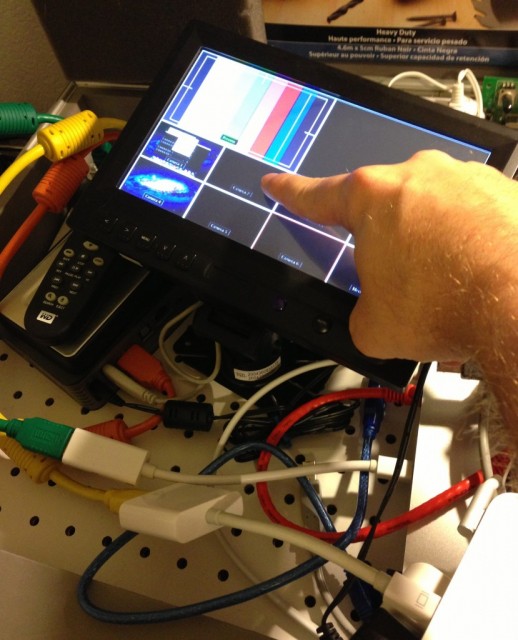 Here’s another episode in the gradually-evolving HD mixing revolution. VJ Anomolee, aka Mattheiu Brooks, has put together one incredible rig. One $140 HDMI touchscreen. One Arduino with Ethernet. And then the engine of the thing, the Blackmagic Design ATEM Television Studio, which costs under US$1000 / 900 €, but provides HD video mixing, built-in H.264 video encoding, and multiple preview outputs, among other features. Put them together, and you have something really futuristic for about the price of a MacBook Air.

In fact, “mixing” doesn’t really cover it. This is an all-in-one video toolset that would be hard to get any other way, just the rig you need for professional, live-ready output that won’t have you projecting awful blue screens and desktop images and the like in the middle of a gig. It’s an all-mixing, all-zooming, all-previewing matrix, something that could be as essential to visualists as a proper audio interface and direct boxes are in a big live music gig.

Open source hardware has a big part in driving this, as the front end to the big, commercial, (yes, proprietary) beast beneath. The Arduino, plus a community-contributed library by “a guy named Kasper,” turn a fascinating piece of video gear into something you can actually use.

The Arduino opens up video and control functionality, as demonstrated in the videos here:

VJ Anomolee is still building his dream rig, so stay tuned for more – consider this a preview, and a chance to ask questions. In the meantime, here’s a look at the technology combination that makes it happen:

And a gallery that demonstrates everything coming together.

We’ll be back with the exciting conclusion.

Updated: Here’s a video proof-of-concept demo. You know you’re a hardcore fan of this site if this excites you. (If you’re not there yet, just keep reading.)