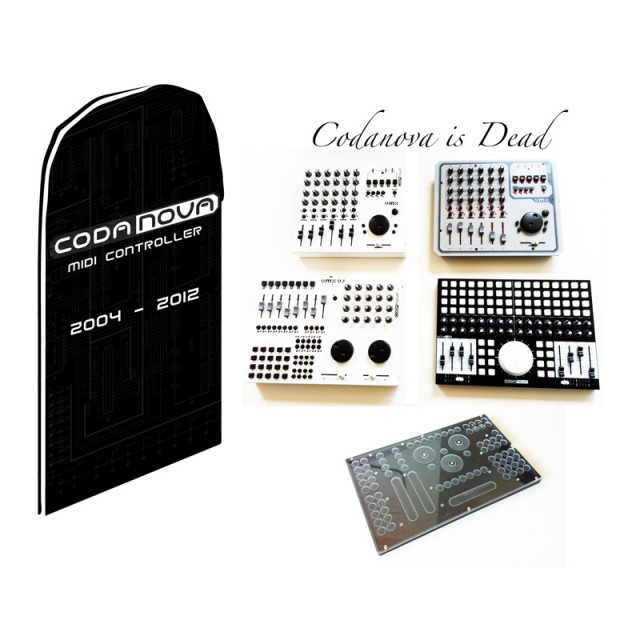 This is the actual image Codanova released. Yipes. Please, no more terrific VJ-oriented boutique French manufacturers going out of business this week, okay?

Stay with us here. So, yesterday, I reported a French boutique manufacturer of custom visual hardware unexpectedly closed shop and ceased all operations, and will shortly discontinue support of its products.

Okay, you can now insert into the sentence above “Vixid, maker of hardware mixers,” or “Codanova, maker of hardware controllers.” That’s two boutique French VJ-fused gear makers shuttering at nearly the same moment. As far as we know, the timing of the two of them is coincidental. (If someone can explain why this happened at the same time, please do. It seems hard to believe there wasn’t some common funding source here.)

I briefly hoped the image above was a joke, or some strange form of promotional teaser. It’s not. Here’s the announcement (though it sounds more melodramatic in French):

To all our users and friends,

Codanova is no longer.. Artisan of the MIDI controllers, we cannot continue the adventure with the current conjuncture. It has been a human and technologic inovations tale that last since 2004. Our projects of MIDI control surfaces could not find a way: Tactile controllers, VMX v64 nanocontrollers ..

Always on top on new technologies for our users, we have stayed close to international VJ community, created by passionates for passionates, our tale terminates with a twinge.

Codanova will ensure for some months the after-sales service. We don’t know for how long, this is not our responsibility but we will do our best.

The rest of the site is, for the moment, still up: http://codanova.com/cn/

At least in the case of Codanova, while the hardware is very cool, there are other makers to take up the same banner. Texas-based Livid Instruments, for instance, is also a boutique maker of handmade MIDI controllers with faders and grids founded (at least in part) by VJs and with support for VJ software and custom control. Livid isn’t exclusively focused on the visual market in the way Codanova was, but I don’t think that hurts the controllers’ usefulness for visuals – and it might be a smarter business move. That’s in stark contrast to Vixid; while we see some interesting prototypes bouncing around, there isn’t anyone else who will sell you a video mixer apart from the likes of Roland.

That said, you never like to see a small maker exit the industry, and what Codanova has built is special. There aren’t controllers quite like theirs from anyone else.

And we never did get to see this project, a joint initiative with modul8, come to fruition:

Watching two beautiful French companies go out of business in 24 hours is for me sad indeed. I wish these teams the best in their future endeavors. I know from first-hand experience how tough it can be producing hardware. And I have no doubt that these products will be inspiring to customers and the visual community at large. I hope that community supports new, successful businesses in future.