I hear it all the time – people want something that just plugs in and visualizes musical inputs. But then, on the other end of the spectrum is a crowd that wants that and powerful editing capabilities.

For both, this could be a compelling development.

Image-Line, the developer behind the Windows music tool FL Studio (popularly known as Fruity Loops) have quietly released a VST plug-in built around the powerful open source, OpenGL 3D tool ZGameEditor. ZGameEditor Visualizer takes that engine, and adds musical visualization and movie rendering, plus loads of presets. (See video.) A modest Windows PC (or Windows installation, Mac users) is all you need to run the results – it even works on XP.

The presets may or may not draw you in, but they can be edited to produce original results. You can create your own generated visuals via the open source ZGameEditor rapid development tool. Tiny scripts produce huge results – with distributable code below 64 kb, we’re back in demoscene territory. And coding and customization looks strikingly simple. You can begin with simple objects that you edit graphically, then add more scripted behaviors if desired. Choose parameters you wish to manipulate, and control them using sound.

The music-reactive side is no slouch, either. You can work with three forms of control:
1. Audio input, using frequency analysis.
2. Automation control. (Yes, automation control from the host – there are advantages to being a VST.)
3. MIDI input, via notes and control data.

Because it takes automation input, you could also chain another plug-in with more sophisticated analysis options – or other controls – into the visualization. (Image-Line of course recommends a couple of the built-in sound analysis tools in FL Studio.) 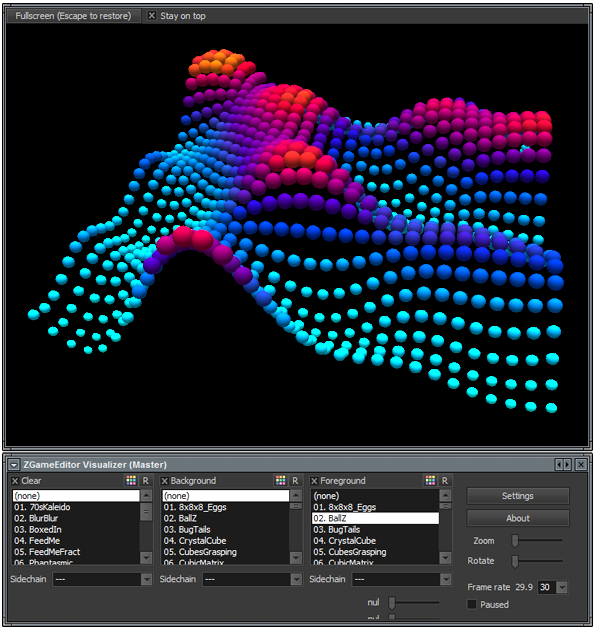 This will cost you money, even though the underlying tool is open source; the plug-in is around €150.

Thanks to Martin for the tip.

Tom Solid (of the tutorial above) has also created a music video with the tool:

artists
Head by drone to a 3000-year old ruined village for a stunning performance by Hayk Karoyi
Plug-insSoftwareWindows
IK’s model of the Neve 1081 console is free this month, plus free EQ and metering
artistsSoftwarevideos
Celebrate your Blue Monday with the choir sound from New Order – and Kraftwerk’s Orchestron
MIDISoftwareWindows
Dorico 4 is finally engraving-level notation with MIDI editing powers, in a single tool