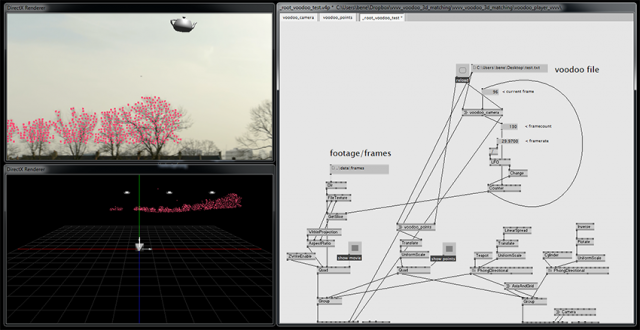 Matching a 3D scene to video footage with a moving camera — it used to be that performing tasks like this required expensive commercial tools. Now, you can use vvvv – free for non-commercial use – and a free research project called Voodoo Camera Tracker. Or, on the open-source side of the coin (including commercial use), you can use Blender.

vvvv we’ll talk about more this week, as the visual programming language just celebrated its 10th anniversary with an arty party in Berlin. Voodoo Camera Tracker is worth mentioning, too – the work of the Laboratorium für Informationstechnologie, University of Hannover, it’s not necessarily intended to replace more advanced commercial tools, but as this tutorial demonstrates, it could be just right for independent artists.

Here, it’s possible to do some fancy 3D tracking techniques without breaking the bank.

The work of Benedikt Groß, now studying at RCA London, the tutorial is available on GitHub and was used as the basis of a research project called “Synthetic Biology,” seen here. It shows off a powerful combination of vvvv as patching language with the 3D camera tracking capabilities of Voodoo. More on that project:

By the way, Benedikt’s name should be familiar to readers of this site, as the co-author of the extraordinary text Generative Gestaltung.

I was actually wondering about Blender as I wrote this, and then minutes after publication, Human Koala pointed me to this nice Blender workflow via Facebook – here, using free-as-in-freedom free tools:

Demo of tracking workflow in Blender from Sebastian König on Vimeo.

Here’s a quick demo of the tracking workflow in Blender, as it was this morning. But it already has gotten better by now. 😀 Hard to keep up with development! This is becoming a serious alternative to other (commercial) trackers. When GSOC is over, we’ve got a mature tracker right there.
Music: Doctor Strangelove
Btw, if you want to know more about compositing in Blender, check out my 3d compositing tutorial on cmiVFX.com cmivfx.com/tutorials/view/255/Blender+3D+Compositing
It covers all you need to know to integrate 3d elements into real life footage (does not cover tracking).
🙂

Sebastian for his part is based in Leipzig, Germany, which means we’ve got an all-German post going here. I keep waiting for that intelligence to rub off on me. It’s only been one year; I know it’ll take time.

iOS Three-way: Yes, With Audiobus, You Can Run Three Music Apps Together on iPad [Video]