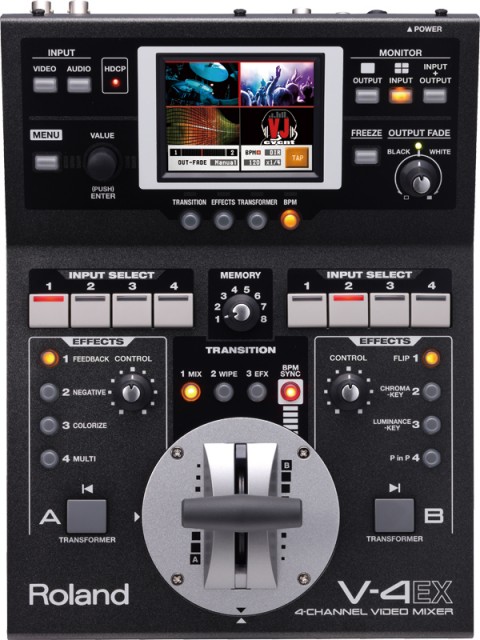 For years, the Roland V-4 was the battle axe of the VJ and visual performance scene. Not owning one almost meant you weren’t serious about playing. And the ubiquity of these at community events meant more collaborative and back-to-back sets.

Then computers evolved past – and even dropped – composite/component analog video outs, and the V-4 was left behind. The V-8 was a step forward, but still couldn’t keep up with the shift in video ins and outs.

At last, we get the Roland V-4EX. Like the original V-4, it’s a four-channel mixer with effects. And it shares the V-4’s classic layout. It also has the feature set that lets it handle HDMI ins and outs, even if they have copy protection.

In fact, we were so eager to see Roland finally fill this gap, that we were thrown for a bit of a loop when Roland outed its V-40HD. (It didn’t help that one excited Roland Systems Group rep described it to me as a successor to the V-4.) The V-40HD is an impressive, HD mixer, but despite having “V-4” embedded in its name, it clearly isn’t quite a V-4 in heritage. (I would still say it’s related, but perhaps “Cousin of V-4” is a more fitting title than “Son of V-4,” or, uh, “Bride of V-4.”)

The V-4EX is what Roland apparently views as the real successor. It’s out next week at Europe’s ISE trade show (featuring a keynote from friend-of-the-site digital magician Marco Tempest). The appearance at ISE suggests a bit more of a broadcast/systems industry application, but the V-4EX, unlike the V-4, does have performance in its spirit.

The big question is, will VJs blood be pumping having waited for these features so long. Specifically, it appears that while the V-4EX can upscale to higher resolutions, its internal engine runs at just 480P/576P – hence, no V-4HD moniker, presumably.

On the other hand, I’d challenge you to find something self-contained and portable like this with this kind of accessibility for mixing, input, output, and effects. (In fact, it’s precisely because we couldn’t find that that we’ve awaited this product so eagerly!)

It’s too soon to judge until we hear pricing. For now, availability is expected Q2, Roland tells CDM, and we should know more on pricing and other details before then.

Specs and some commentary (speculative, of course!):