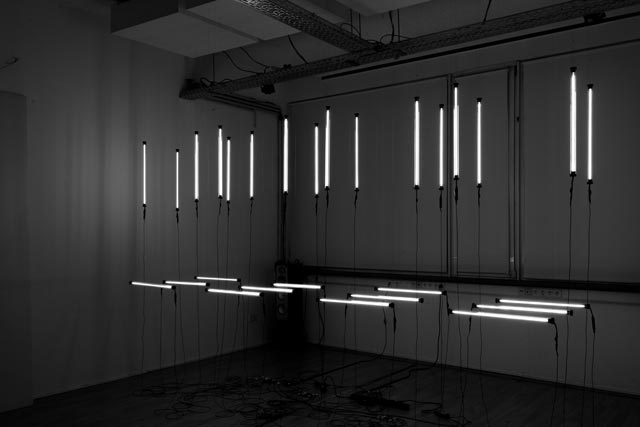 CL:OC – A Kinetic Installation from Grosse 8 on Vimeo.

G8 LABS’ CL:OC is a lighting installation shown recently in Köln, Germany. It’s a kind of moving sculpture, choreographing tubes of light as they form and dissolve the digits of the titular clock. It’s a beautifully-elegant, minimal piece, the sort that demonstrates how much can be done with simple lighting fixtures simply by treating them themselves as part of the image.

Thanks to creator Gerrit for sending this in! Full description:

CL:0C by LICHTFRONT/GROSSE 8
– A kinetic installation in space –
– Rediscovered time –
G8 LABS of LICHTFRONT/GROSSE 8 are exhibiting their first kinetic installation as part of the Passagen 2013 forum at Interior Design Week in Cologne.
The installation CL:0C is a perpetual motion machine. It is in constant motion and mostly under its own power. In its whirring mutation, it is constantly stimulated by random pulses from its control unit. Such electronic stimulation leads to quiet moments within the functioning and progression of CL:0C itself, but also in the eye of the beholder. The resulting stop-motion effect is no illusion of motion but one of cessation. CL:0K’s tentacles only lie still for a few seconds at a time.
CL:0C operates using elements of light, sound and motion, primarily acting as a kinetic element in space. The unfamiliar use of both analogue and digital aspects changes the whole room. Familiar two-dimensionality is transformed by the 28 elements of CL:0K into a full three dimensions of length, breadth and depth.
During the various phases of the transformation, each of the elements changes its position in space and the way it is perceived in an ostensibly labyrinthine choreography. For brief moments there will be a sense of structure and shape, until CL:0C in its continuing mutation once more discards them.
Unexpected pauses interrupt the mutation and project film stills into a space with no screen. While their vivid colours echo on the retina, the viewer then rediscovers time. Analogue digits extend into all dimensions of the space, awakening in the viewer once more the sense of how quickly time passes – CL:0C.