LEDs are poised to revolutionize displays, but that future isn’t “evenly distributed” yet. And that’s why some emerging projects are so intriguing. Think instant displays, addressable from any computer – including with Syphon. Just plug Ethernet on one end, into strings of these: 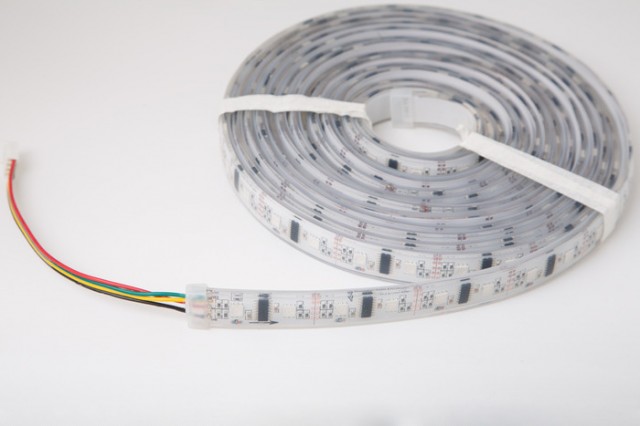 That’s the idea behind PixelPusher, a project currently on Kickstarter. Development appears complete; they’re using crowd funding to support doing a run of a thousand of these, made in California. The notion is networked lighting arrays you can address from a computer, using Syphon or free apps they’ve built with Processing. (For anyone who uses Processing, this is also very, very exciting.)

Lighting effects, LED-based displays and matrices, even volumetric displays then become powerful. And since it’s all networked, interfacing is quite flexible.

The hardware looks cool, as well. Inside is a powerful processor (a 32-bit ARM Cortex-M3 based LPC1758, if you must know).

US$350 will buy you the hardware and 100 pixels, and nicely enough, they say they’ll ship by June. $220 gets one strip and the hardware, to just toy around with this. (Cheaper premiums with just LEDs are available.)

Update: this isn’t fully open source hardware, but includes a lot of open source components. The library and “API” are open, but it appears the hardware itself is closed, at least initially. Still, having the API is a step, and I would happily invest in a closed solution if it works. I expect the bigger obstacle for practicality is that these LED strips tend to be expensive once you start combining a lot of them, but on a smaller scale, this could be absolutely spectacular.

The library, network protocol and software layer are all open source and documented. Right now the firmware is not open source because we’re still working on polishing it; it will be open sourced once we’re done. (We’d also rather not have anyone clone it just yet.)

The hardware is pretty straightforward, so if you want to write your own firmware for it, you can go ahead and do that- we include the PCB layout in the documentation, so that’s something you can do if you want to. On the other hand, we’ve spent six months writing it, and it’s pretty good, so I’m not sure why you’d want to do this.

The project looks terrific, and I do expect to see more of these things. So, I’ll be interested to track their progress and see how they fare. Know of other similar solutions, or got any questions? Shout out in comments.