Resolume’s New Hardware Controller is a Joke, But Why Not Make it Real?

New Resolume Controller with Video Buttons from Resolume on Vimeo.

In the world of technology, as improbable moves to real, concocting an April Fools joke is suddenly a new challenge. But maybe imagining the absurd, or even imagining a joke, is a good creative exercise.

Whatever the deeper reason, I have to say looking at Resolume’s hardware video controller, made in jest, the first reaction that springs to my mind is, why don’t we actually build this?

Okay, as realized, this is fairly silly. The video simply projection maps video images onto a Korg padKONTROL. (For added measure, the blog post refers to Akai, not Korg – though some commenters are still fooled.) Making a full video image show up behind a pad would be a very difficult task, indeed: you’d need the image to be bright enough to show through the pads, and you’d have the problem of the pad mechanism getting in the way of the image. Update: the “fake” is sort of real, after a fashion. They mapped projected images onto the pads.

But why not have a better dedicated controller for VJ apps? Oddly, to date, not one VJ developer has shipped an iPad controller, which is a bit of a mystery. There’s no reason you couldn’t stream some low-framecount videos to iPad thumbnails like this, though. Alternatively, for fans of dedicated hardware controls, while full screens would be tricky, you could use RGB LEDs to get the dominant color of a video clip onto a grid of pads. In fact, you could build this right now – albeit at a 1×1-resolution video preview on the LEDs – on any RGB grid controller.

Controller builder Livid actually comes from a video performance background first; their Base would be a logical choice. And I do wonder if embedded screens aren’t a possibility, streaming low-res video over USB.

Food for thought. What’s your controller of choice at the moment, dear readers? And are you longing for more creative video instrument controls, too? 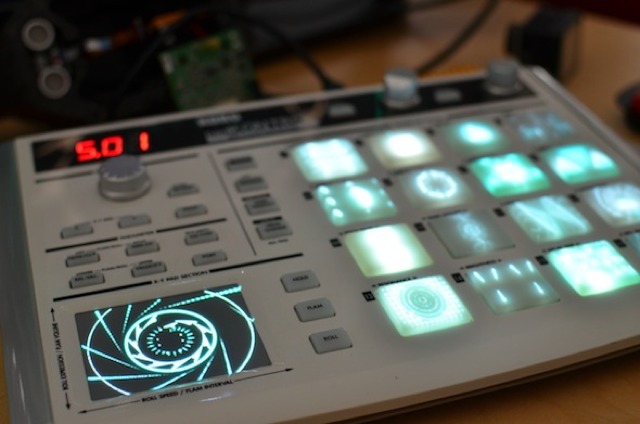