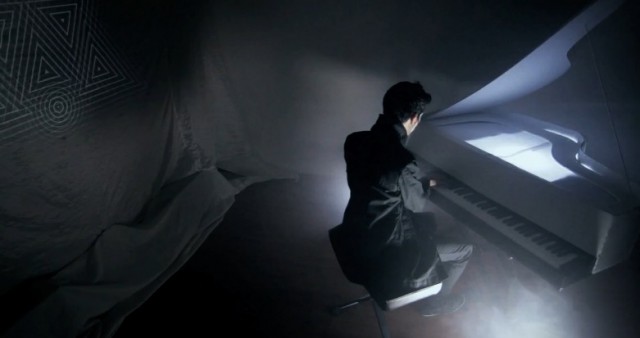 Nail the finger fireworks of a particularly hard Rachmaninoff, and you may well feel like blasts of light are shooting out of the piano. But to give the audience the same sense, a DIY instrument made of cardboard and homebrewed responsive lighting translates that keyboard virtuosity to an optical show. Reader Aylwin Lo sends us this project out of Canada:

Rachmaninoff’s Étude-Tableaux Op. 39 No. 6, as performed by YT//ST’s Brendan Swanson from Aylwin Lo on Vimeo.

I’m with YAMANTAKA // SONIC TITAN. We’re an art collective based in Toronto and Montreal that is most known for making music and putting on dramatic live shows. People like Pitchfork, Vice, and MTV Iggy have nice things to say about us.

We made a video of our keyboard player pulling off a notoriously-difficult Rachmaninoff composition on a special piano we constructed
from an electric piano, a cardboard baby-grand shell, and a homebrew, Arduino-based LED-controlled light rig, and we thought you might like it.

You thought right. Now, if you want to play piano like this, you … uh, have some practicing ahead. But in a novel twist on crowd-funding rewards, they’re also using this very artist to help – even as they work on a video game. (Stay with me here.)

We’re partly doing this for an EPK we’re putting together, but also to promote a perk on the Indiegogo campaign we’re running to finance the development of a videogame we’re working on, called YOUR TASK // SHOOT THINGS. That perk is piano lessons with our keyboardist:
http://igg.me/at/ytst

Here’s a look at the game.

YOUR TASK // SHOOT THINGS Trailer from Aylwin Lo on Vimeo.