Creative code may, to most people, be as far from the natural world as possible. But in a purely aesthetic way, finding the connection between natural environment and code expression is the mission of Dan Shiffman’s recent tome. And in this talk, it’s the nature of the Nature of Code, as creative code guru Dan Shiffman goes into his approach.

The setting is fitting: Dan is at the headquarters of Kickstarter, the platform that managed to fund his book. After mixed success with a conventional publisher, Dan turned to self publishing. The crowds capitalized the writing, of course – keeping this talented author out of the trap of the publisher’s advance, that bag of cold that later means you lose control over your writing. But they did more, getting involved in testing the content. And with an open source code repository, the examples are finding their way to other platforms – not only Processing, but OpenFrameworks and JavaScript and more.

Reading Dan’s writing or examples feels a little bit like being in his class. Watching this video will feel a lot like you’re suddenly auditing at New York University.

You get a feature-length talk through examples, the book, genetic algorithmic imagination, and more. Good times.

I love that mid-sentence, several minutes into the talk, Dan Shiffman suddenly asks whether everyone has heard of Processing. Here I am, waiting until the end. If you haven’t, read … these. Or go here.

Oh, and – I know I’m interested in this – here’s that in-progress OpenFrameworks fork of the book. 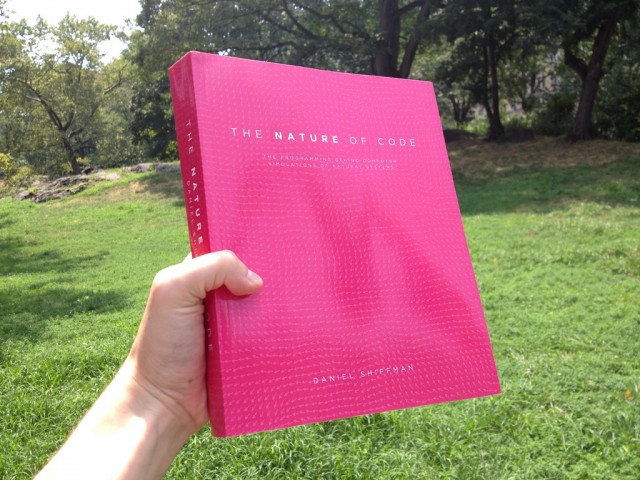 On Hacking the New Kinect