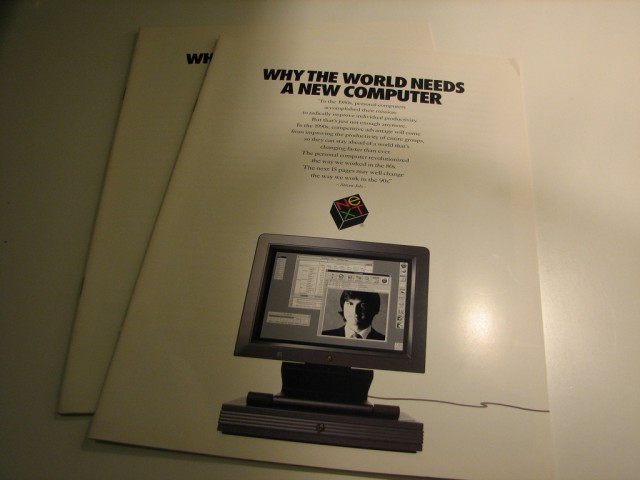 It seems like the perfect Steve Jobs vision of a computer. The design even scares some with its forward look. It’s Darth Vader chic: slick, entirely black, with almost nothing visible to mar its perfectly-abstracted geometric shape. The new workstation is aimed at high-end markets in video, sound and music, and science. It bets on the latest up-and-coming technologies in storage and connectivity, even before they’re widely available in the market, with new multi-core processing for computation and video, and a breakthrough in high-resolution displays, with horsepower integrated on custom-designed boards. As a result, it promises cutting-edge creativity. But some are critical of this machine’s lack of conventional expandability in the face of the PC market – which offers more of the standard connections pros are used to, at a far lower cost. It seems like this might be a high-end machine that’s out of touch with average users.

In other news, today the Soviet Unio–

Yes, ahem. Starting again. Steve Jobs’ legacy lives on in a new, powerful workstation. Clad entirely in black, its sleek shape is ultra-compact — tiny in a way that belies the advanced hardware inside, a workstation that can look at home atop your desk. With multiple Ethernet ports, there are also advanced options for networking, plus a powerful set of features aimed at high-end markets in video, sound, music, and science. But the lack of internal expansion worries would-be buyers, who argue that pros need more upgrade options, and would be better-served by much more inexpensive traditional PCs. In other news, President Bush today —

Wait, no. Sorry. That was all what I’d say about the 1990 NeXTstation series. Let me try one more time. For real.

This could be one of the most powerful workstations available to customers, fitting the advanced 3D visualization technologies in Hollywood movies into a sleek, all-black box. An advanced computation and 3D graphics architecture allows massive parallel processing previously unseen in computers of this class. It’ll be the first to bring ultra-high-resolution displays to a computer you can buy. Storage is of the high-speed internal variety, with a focus on image pipelines. Pixar was even on-hand to show off the capabilities of this machine for their work in animation and special effects, as they describe a world in the future where even the likes of Disney will be producing full-length movies on compu–

Okay, fine, you know what I’m up to. I’m talking about the Pixar Image Computer. (Read fascinating notes from one of its creators; it seems it’s no longer available, but he also compared the Pixar machine to the 1999 G4 tower from Apple for Byte. History repeats itself.)

So, yes, if anyone says “this wouldn’t have happened if Jobs were still around” about the upcoming Mac Pro, they’re seriously misinformed.

In the age of the iPhone and iPad, it’s easy to forget how much Jobs was personally invested in the high end. Here is the executive whose fortunes were saved by people slaving away over workstations at Pixar, who wrecked still more fortunes trying to sell ultra-premium workhorse computers to universities and laboratories. When Steve Jobs talked about computers as cars and trucks, he said this:

But he never said he didn’t like the trucks. In fact, various indications are that Jobs loved the truck-style computer sometimes above the more accessible machines – hence the repeated efforts at NeXT and Pixar, even in spite of massive negative commercial feedback.

Of course, it turns out what really makes people uneasy is a world in which those next-generation computers connect to hardware in a way they’re not used to – and one they thing will be expensive and inconvenient. (I’ll resist the temptation to slip back into the past here and start talking about the iMac. And who knows – maybe these critics are right.)

I imagine the new Mac Pro is one of the last products – and almost certainly the last conventional computer – that Steve Jobs worked on closely. While not even previewed until this month, the long arc of next-generation Intel tech – and the silence on the Mac Pro line after around 2010 – makes that a near-certainty.

Regardless, the upcoming Mac Pro realizes a long-standing Steve Jobs dream to build a high-end workstation that could usher in a new age of graphics sophistication. It really was demonstrated by Pixar at WWDC this month, just as they once showed off the Pixar Image Computer Jobs had helped guide.

Sure, someone switched from cubes to tubes. And that makes sense: the original cube was built around the single board. The Mac Pro ingeniously suspends a cube of four boards around a cylinder in a way that works for ridding the design of heat. (Yes, if you think about it, that cube is even still inside the case.)

It’s pretty easy to sum up the way in which the Mac Pro has split current Mac users. (I’ll leave Windows and Linux PC users out of this.) Current Mac Pro users with a big investment in internal storage and internal PCIe cards are, for the most part, unhappy. Everyone else is, for the most part, happy – either they like the looks of this system, or feel secure that the iMac, Mac mini, and MacBook lines will meet their needs – now with the same complement of USB3 and Thunderbolt.

I think it is safe to say, however, that the Mac Pro redesign heralds some pretty great things for doing real-time visualizations of all kinds. Two Ethernet ports atop wireless connections, Thunderbolt 2.0 with 4K displays over DisplayPort, the latest Intel processing, and the latest AMD graphics all combine. The advances in external hardware, plus the advances in graphics, all look very promising.

In fact, people are so tied in knots over the slots issue that they might miss important information like this, from Ars Technica:

…it seems that OpenGL apps can leverage both GPUs with some extra work by the developers. That means that we could see Crossfire-like support for professional 3D applications in OS X (OpenCL compute apps don’t need to be modified to use both GPUs’ stream processors).

This is something that Windows professional OpenGL apps don’t get in Crossfire/SLI setups, and the second GPU of SLI and dual-GPU cards goes unused in pro apps under Windows and Linux.

There’s also a typical Apple move in that this machine eschews NVIDIA and CUDA in favor of AMD and OpenCL – with no option to configure anything else. (Certainly, no option was announced, and the GPU is stuck right on the card.) The message to developers is, support OpenCL, and do it right – or else. That’s likely sobering news for anyone working with software that has had poor support for OpenCL, or for fans of CUDA who really want to use a Mac, but the message is clear to developers. Our way or the highway — what’s the fruit-named company that seems to have telegraphed that before?

To users, that’s still reason to exercise caution until developers and Apple deliver. So, it’s worth reading Ars’ analysis from the graphics standpoint. The fact that you can’t upgrade the GPU is the one potential showstopper, more than having to use external storage or get used to a tube-shaped machine, in that it could make the investment far riskier.
A critical look at the new Mac Pro: A graphics pro breaks down Apple’s new machine.

It’s really difficult to speculate on a machine that has no price tag. But if the Mac Pro proves to be in any way affordable, it could be a breakthrough for people advancing the state of the art with 3D graphics. Video ingest is well-served by Thunderbolt – and the presence of six Thunderbolt ports is serious news. Output with this much graphics horsepower and the newest DisplayPort tech is also at a new high. Think of that power in a machine that’s small and portable and (guessing, from the description) perhaps also quiet.

Price tag, though, is everything. It’s worth saying: you can’t view Jobs’ take on computers at NeXT and Pixar as a failure. As commercial products, failure is no exaggeration. But these are also machines that helped build a new age in visual and musical expression that have shaped the past decades. Their impact on art and civilization was massive, from running the first Web browser to contributing to the dawn of mainstream digital animation and real-time sound. Then again, that contribution would have never meant anything had more accessible machines not taken up their call. On the surface, the Mac Pro seems to be a fitting tribute to Jobs’ commitment to high-end, expressive, massively visual computers. When these things finally hit the market, though, we’ll find out if history repeats itself – and these remain tools for the very few.

See you in the fall, then.

More reading:
Intel’s Thunderbolt 2: Everything You Need to Know [AnandTech, at Computex in Taipei. By the way, I was there – this isn’t just Apple news; I expect a lot of action on Thunderbolt from the PC ecosystem. As the iMac was with USB, the Mac Pro’s insistence on external expansion could benefit PC adoption.]

And follow the controversy on CDM as I talk music expansion (much of it also relevant here):
Life After Slots: What the Mac Pro, External Hardware Mean for Production