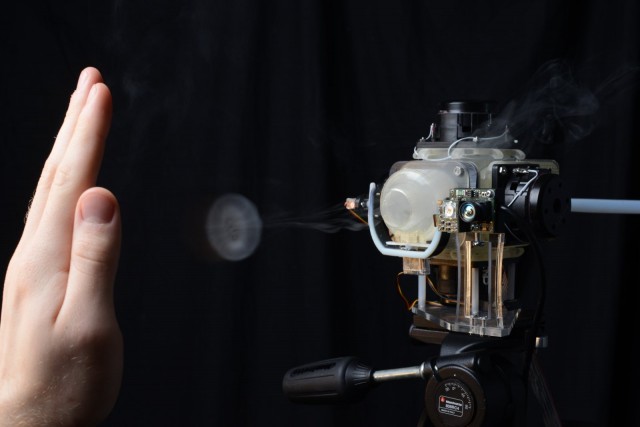 Flinging air like smoke rings, Aireal is a novel solution to the problem of touchless interaction. “You’ll get used to it in time,” as Lewis Carroll’s Caterpillar might say. Photos courtesy Disney Research.

The bane of wave-your-hands-in-the-air interaction systems is that you can’t feel anything when you use them. Swatting the air with your hands in front of a Kinect, for instance, gives you nothing in tactile resistance – those invisible objects can be seen, but not felt.

So what’s the solution? Well, if the interaction is in the air, you could use actual air for feedback.

That’s what researchers from Disney in Pittsburgh, PA propose with their new system Aireal. (Get it? Like the mermaid? Ahem.)

The device is a robotic haptic air emitter, bursting short blasts of air called “vortexes.” When those collide with your body at the right moment, you can imagine you feel balls flying at your mitts, seagulls darting around your head, or a butterfly landing on your hand.

It’s appropriate that this comes from Disney Research, as the machine resembles nothing if not the Alice in Wonderland Caterpillar, blowing smoke rings. (The smoke is just for visualization; normally, you’d only feel those blasts.)

Portability is a question, of course, as is cost – and it seems this interaction can work in some cases but not others. But it demonstrates how solutions to better interaction will increasingly turn to physical sensation, and may consider every possible permutation of human sense and physical output. And it’ll give you something to think about the next time you run your hands under a dryer at the airport.

Thanks to (inventor) Rajinder Sodhi and Moe Jenkins for the tip! Here’s how the researchers describe their work:

AIREAL is a new low cost, highly scalable haptic technology that delivers expressive tactile sensations in mid air. AIREAL enables users to feel virtual objects, experience dynamically varying textures and receive feedback on full body gestures, all without requiring the user to wear a physical device. AIREAL is designed to use a vortex, a ring of air that can travel large distances while keeping its shape and speed. When the vortex hits a user’s skin, the low pressure system inside a vortex collapses and imparts a force the user can feel. The AIREAL technology is almost entirely 3D printed using a 3D printed enclosure, flexible nozzle and a pan and tilt gimbal structure capable of a 75-degree targeting field. Five actuators are mounted around the enclosure which displaces air from the enclosed volume, through the flexible nozzle and into the physical environment. The actuated flexible nozzle allows a vortex to be precisely delivered to any location in 3D space.

AIREAL is part of our long term vision for creating large-scale computer augmented environments which can deliver compelling interactive experiences seamlessly, everywhere and at anytime. Free air tactile feedback technology is a key element of these future interactive spaces with a wide range of applications including gaming and story telling, mobile interfaces, and gesture control among many others.

The AIREAL project is being developed at Disney Research Pittsburgh by Rajinder Sodhi, Ivan Poupyrev, Matthew Glisson, and Ali Israr. Joanna Dauner and Alex Rothera joined the AIREAL research team for the design and production of the SIGGRAPH 2013 Emerging Technologies Installation. 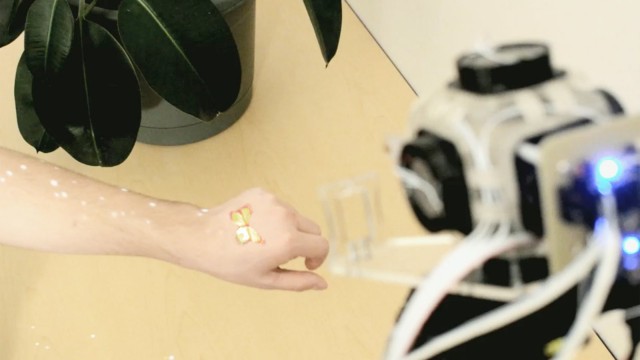