Augmented reality has sometimes seemed like a solution in search of a problem. But two new apps suggest some degree of utility. And as Google struggles to convince people they want Google Glass, smartphones and tablets are proving just fine for occasionally overlaying visual information on an image.

At top, IKEA cleverly shows what their furniture will look like in your house. The idea itself isn’t so new – various software solutions have over the years attempted to help you plan home decor. But the visual feedback here, apart from being playful, could actually help customers visualize what a new acquisition might look like in person. (And the promo video does nothing to help any stereotypes we might have of how Swedes spend their time at home.)

Via The Verge, who note that part of what makes this possible is that the images in the IKEA catalog are themselves already virtual models.

From furniture to cars, Audi owners get a manual that requires less head scratching and thumbing between your dashboard and a book. eKurzinfo for the Audi A1 and A3 uses image recognition to identify gauges, provide background information, and – perhaps most practical of all – guide clueless car owners around their engine compartment. The app launched on the A1 before appearing on the A3 this week, and took home recognition at the GSMA Global Mobile Awards. (not quite as much fun as Cannes, but… it’s the phone business)

Both apps are the work of the same studio: Metaio is a design house specializing in AR apps. Based in Germany, they develop their own apps but also claim 50,000 developers and 1000 apps using their own development platform. The SDK is free to try (with a watermark) but will set you back 2,950 € before VAT. What you get from the platform once you cough up the dough is fairly substantial. You get Android and iOS support on mobile plus Mac and Windows desktop app exports, a drag-and-drop visual creator, image and object recognition (as seen in the Audi app), and cloud-based data updates (again, allowing the Audi app to work without manually updating the manual).

For lots more on what Metaio is up to, they’re on Pinterest. 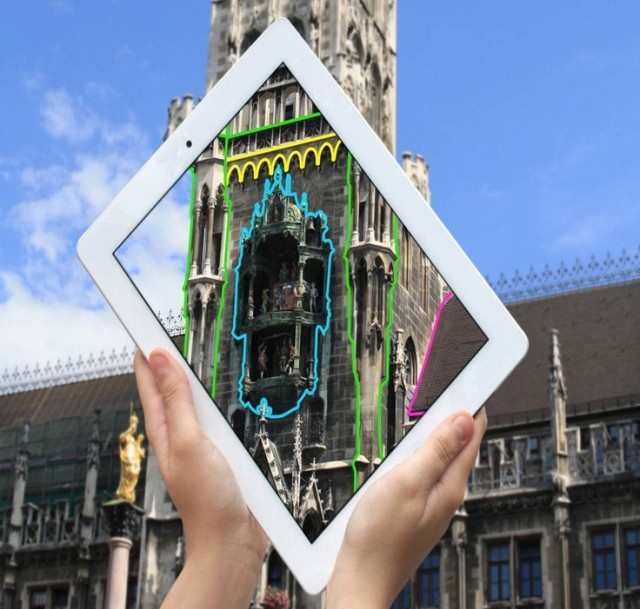 Projection mapping, without the projector. Metaio shows off their tech at Munich’s Marienplatz. Photo courtesy Metaio.

And this area is likely to grow. Again, The Verge on the topic, covering a conference devoted to exploring new possibilities in AR in the age of Google Glass:

In the shadow of Google Glass, an augmented reality industry revs its engines

There are two takeaways: one, this is likely to be a hot investment area, with Glass at least doing good promotion, whether or not it’s going to be useful in the market. Two, increasing legibility and clarity should be a big goal. The best quote comes from game designer Will Wright (Sim City):

Will Wright … says he doesn’t actually want to augment his world in the technical sense. As it is, the world provides too much information, says Wright, and he’d like to cut down on the clutter and improve the signal-to-noise ratio.

And that’s where the Audi app shows the most promise. Wearing goggles on your face may not catch on, and we’ve already seen strange gimmicks that, like the 3D glasses included with comic books back in the day, do little to increase the value of paper. But stuck on the side of the road, you might like your iPad to help you work out what’s under the hood of your car. And with so many Android and iOS gadgets out there, people don’t in fact need hardware: they just need a use case.

MacWindows
AudioSlide plays advanced MPE ramps even without hardware – Max for Live
MacWindows
data.train Max for Live instrument-effect mangles and transforms any sample or source
appsmobile
PsyTexx is a forgotten tracker for Palm PDAs – with features like distortion
androidappsiosMacmobileWindows
Inflation, begone: SunVox is still donationware, and 2.1 makes it slicker and more powerful