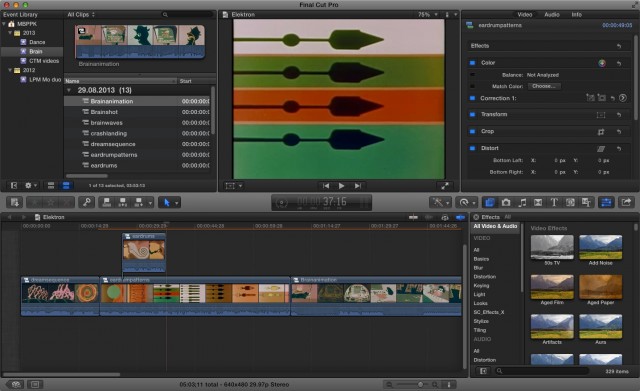 But Final Cut Pro X 10.1 is the big news. It’s finally the payoff of the painful transition to the X generation. At the same time, combined with a steady parade of updates Apple has delivered since FCP X’s launch, 10.1 relieves a lot of the pain of migrating to X.

Because the news of 10.1 coincides with the Mac Pro, you’ve probably already heard about 4K video monitoring with Thunderbolt 2, or the playback and rendering optimizations that take advantage of the dual GPUs in the higher-end (US$3999) Mac Pro.

And indeed, this is the release of Final Cut Pro X that makes 4K video a reality. (Next: an Apple 4K display?)

But I think it’ll be the smaller enhancements that actually mean something to Final Cut Pro X users. In fact, if I had to say just two words about 10.1, it’d be project snapshots. FCP 7 ensured you didn’t do harm to your project by allowing you to easily roll back to a previous version. FCP X inexplicably eliminated that feature. (It’s inexplicable partly because versioning has been an emphasis of OS X save changes.)

Now, it’s back. And generally, the “I didn’t just ruin my project” feeling is essential to editors, probably more so than 4K.

It’s worth reading through the whole list here, I think. I’ve loved Final Cut Pro X for its blazing performance, but cursed its usability or missing features, and heard similar things from a whole lot of users – even some of them fairly robust FCP X fans. Now, I think the early adopters will have an easier time recommending the upgrade to FCP 7 hold-outs.

Note that you will need 10.9 in order to upgrade to these new release of Motion, Compressor, and Final Cut Pro X. What’s new:

Optimized playback and rendering using dual GPUs in the new Mac Pro
Video monitoring up to 4K via Thunderbolt 2 and HDMI on select Mac computers
4K content including titles, transitions, and generators
Libraries allow you to gather multiple events and projects within a single bundle
Easily open and close individual libraries to load just the material you need
Option to import camera media to locations inside or outside of a library
Automatically back up libraries to a user-specified drive or network location
Project Snapshots let you quickly capture the project state for fast versioning
Audio fade handles on individual audio channels in the timeline
Add precise retime speeds by entering them numerically in the timeline
Non-rippling retime option
One step Replace and retime
Custom project frame sizes
Through edits displayed on all clip types
Join Through Edit command removes bladed cuts to clips in the timeline
Detach audio with Multicam clips in the timeline to manipulate audio and video separately
Make video- or audio-only edits into the timeline with Multicam Clips as sources
Blade and move audio in J- and L-cuts
Ability to roll audio with J- and L-cut splits open
Option to hide the Event browser to gain more screen space for viewing
Native support for .MTS and .MT2S files from AVCHD cameras
Used media indicators on source clips
Improved performance with large projects
Improved performance when modifying or adding keywords to many clips at once
Easily move, copy, and paste multiple keyframes
Option for the linear animation with Ken Burns effect
Improved image stabilization with InertiaCam and Tripod mode
Import photos from iOS devices
Proxy and playback quality controls accessible in Viewer menu
Support for portrait/landscape metadata in still images
Effects parameters, fonts, and text size included in XML metadata
Improved support for growing media and edit while ingest
API for custom Share operations using third-party software
FxPlug 3 with custom plug-in interfaces and dual-GPU support
Share directly to YouTube at 4K resolution
Share directly to Chinese video sites Youku and Tudou
Spanish language localization

Final Cut Pro X version 10.1 also improves overall stability and performance, and addresses the following issues:
Loading a library from a SAN is significantly faster
You can eject drives after the libraries on those drives are closed
It is much easier to move clips with transitions in the timeline and lift them out of the Primary Storyline with transitions preserved
Clips can be trimmed completely out of a timeline when using the rolling trim function
Media management functions can be cancelled with undo
Quitting the application cancels background processes
5.1 surround sound audio originating from a camera as AVCHD will no longer be down mixed to stereo during import
If you have transcoded RED RAW files to ProRes through a third-party application, you can relink to the original RED files within Final Cut Pro
Transform correctly maintains linear motion on all keyframes

And, as the newly-localized FCP might say, do these subtle changes add up to make a big difference, one bigger than the sum of its parts?

10.1 is a free update, delivered to Final Cut Pro X users on the App Store.

Final Cut Pro X is available as a 30-day free trial (something generally missing from the App Store):
http://www.apple.com/final-cut-pro/trial/