A Building-Sized Net as Canvas, Overlaid with Light Paintings from Mobile Phones 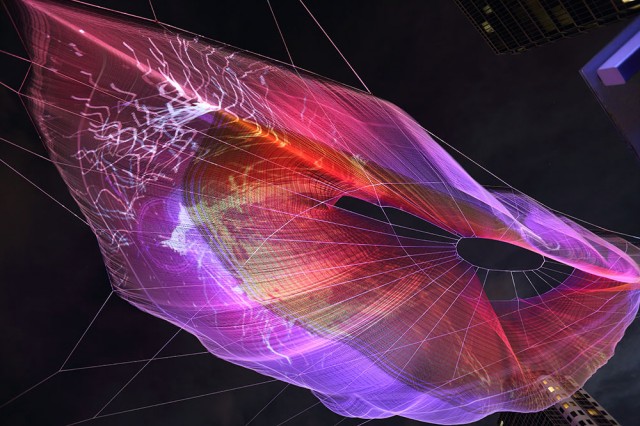 “Interactive architecture” has long been a phrase, a future echo – something coming – but it’s been tough to say what it would look like when it arrived. In the collaboration of Janet Echelman and Aaron Koblin this month, we see one form it might take.

Koblin and Echelman joined forces to celebrate the 30th anniversary of the TED Conference in Vancouver, in a massive 300-foot literal web (and Web) hung high above the water. Koblin is the well-known digital artist, now at Google, but the material of the work is rooted partly in old-world technique. Echelman – here sponsored by Autodesk – uses West Coast net-making knowledge to produce her sculptures in textiles – some 860,000 hand and machine-made knots and 145 miles of braided fiber, the studio says.

Koblin’s contribution is in setting that textile canvas into motion, via light painting in kinetic projections made by onlookers with mobile phones. As their fingers trace brightly-colored pathways across the surface, there’s a resonance with his landmark visualization “Flight Patterns.” There, the pathways of unknown aircraft was anonymous, faceless – images of planes flying through the night with perhaps tragic associations this month.

“Unnumbered Sparks” is itself a reference to anonymity, even in public participation. But the ephemeral performances of visitors in light is anything but faceless. People are simply delighted by their ability to make splashes of color from their pocket phones, as if someone has just given them a building-sized paintbrush or let them design a fireworks show. And this is the presumed magic of interactive architecture: the visuals themselves not only disrupt the monotony of the everyday, but involve the public in large-scale re-imaginings of that environment.

There’s a huge team behind the project; weaving the strands of data together is as epic a task as the physical fibers. There’s the Google Data Arts Team alongside the sculptural engineers, craftspeople working in sound as well as in fibers.

And then there are the people who visit, the strangers as collaborators. I can say, I’ve seen the participatory magic happen first-hand. Some years ago, I was part of an early, primitive experiment in this kind of participation, joining Joshue Ott in a multi-user art exhibition at New York’s Devotion Gallery. Even with a trickier technology working the exhibit, we found the gallery experience surprisingly transformed. Instead of ducking behind glasses of free, low-quality wine, visitors wound up chatting with one another, discovering ways of making installations work. Actually, failing to include overly-detailed instructions turned out to be a win – people couldn’t resist the chance to play and work it out for themselves.

Aaron Koblin is now at Google and pushing their technologies is presumably part of his job description. But the evolution really has mattered. Here, Web Sockets make the interface between handheld device and interactive artwork more effective, reliable, and open to a wider audience – and, crucially, platform-independent. (At our MusicMakers Hacklab last month, some of our participants demonstrated this, too, with phone-controlled sound. There, too, the Web was empowering: no one had to worry about whether they had the latest iPhone to play along.)

And the technologies, too, are a marvel, precisely because they make this sort of interaction easier than ever, freeing up the artists and engineers to focus on expression. Aaron tours the work, reminding viewers that the entire project is a Website. (Here, powered by Web Sockets, Web Audio, WebGL, and the very cool Polymer library that encapsulates visual elements in HTML in such a way that they can run apps and sites alike.

More on the project site:
http://www.unnumberedsparks.com/

and on the Echelman site: 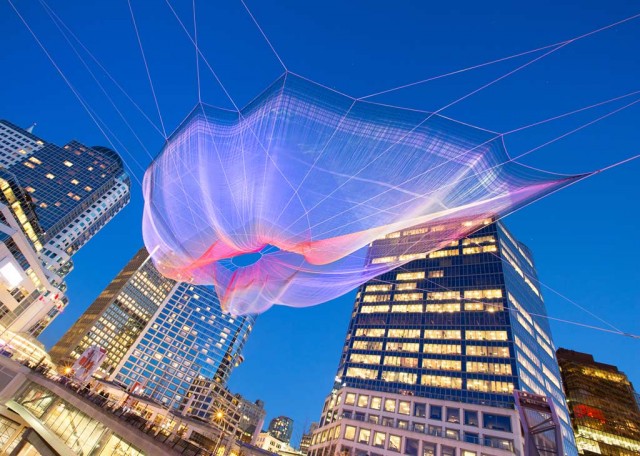 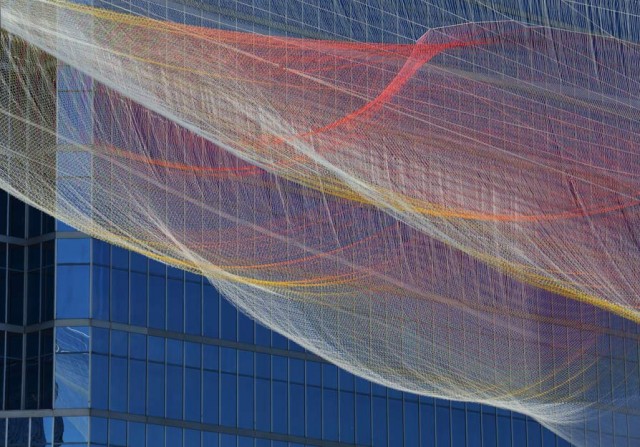 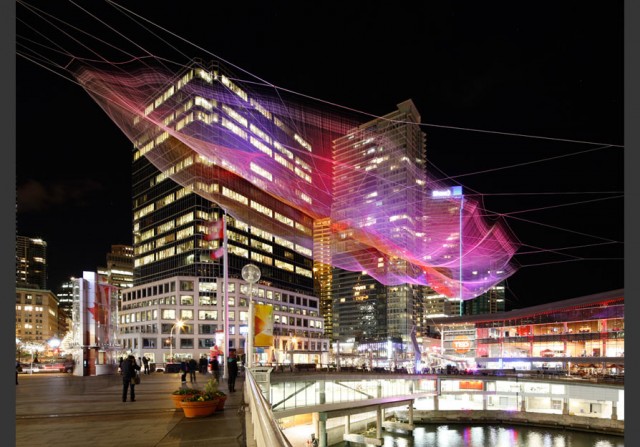