Modstep could change how an iPad fits in your music making 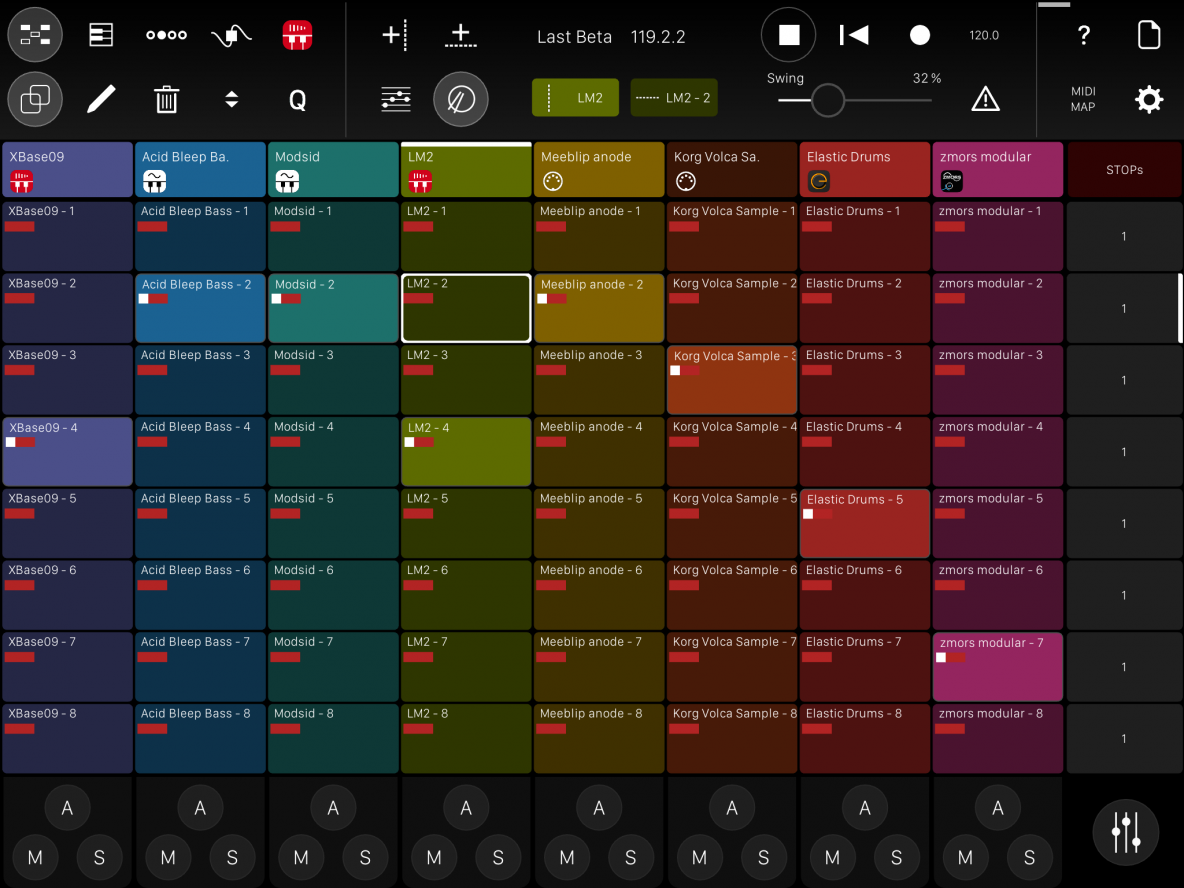 Or, that’s its potential. But while the iPad has become a platform for extraordinary instruments and controllers, for many of us it hasn’t yet become a hub for creating, arranging, and sequencing ideas. Modstep could change that.

First, let’s back up and consider some of the basic elements that make music making fun. Because if we start subtracting functionality in the name of simplicity, we had better hope we don’t lose those elements. For me, that’s:

1. Playing with rhythm and melody.
2. Tweaking my favorite synthesizers (software or hardware).
3. Messing about with sound recordings.

The desktop Digital Audio Workstation lets us do these things by virtue of the fact that it does absolutely everything anyone would ever want. But all that functionality crammed onto a tablet feels awkward and unfocused. (It’s often uninspiring on the desktop, too, when it’s more than is needed for a job.)

Going the opposite way, though, you could try to produce a music tool for mobile from the ground-up that’s as simple as possible. Auxy’s Henrik Lenberg recently waxes poetic about rethinking music creation But by refocusing on stock sounds at the expense of external sounds, by removing the ability to work with our external toys, and by over-simplifying rhythm, part of what Auxy rethinks is the very stuff I find exciting. (That’s not to say Auxy doesn’t have a place, and I’ll write more about it soon.) 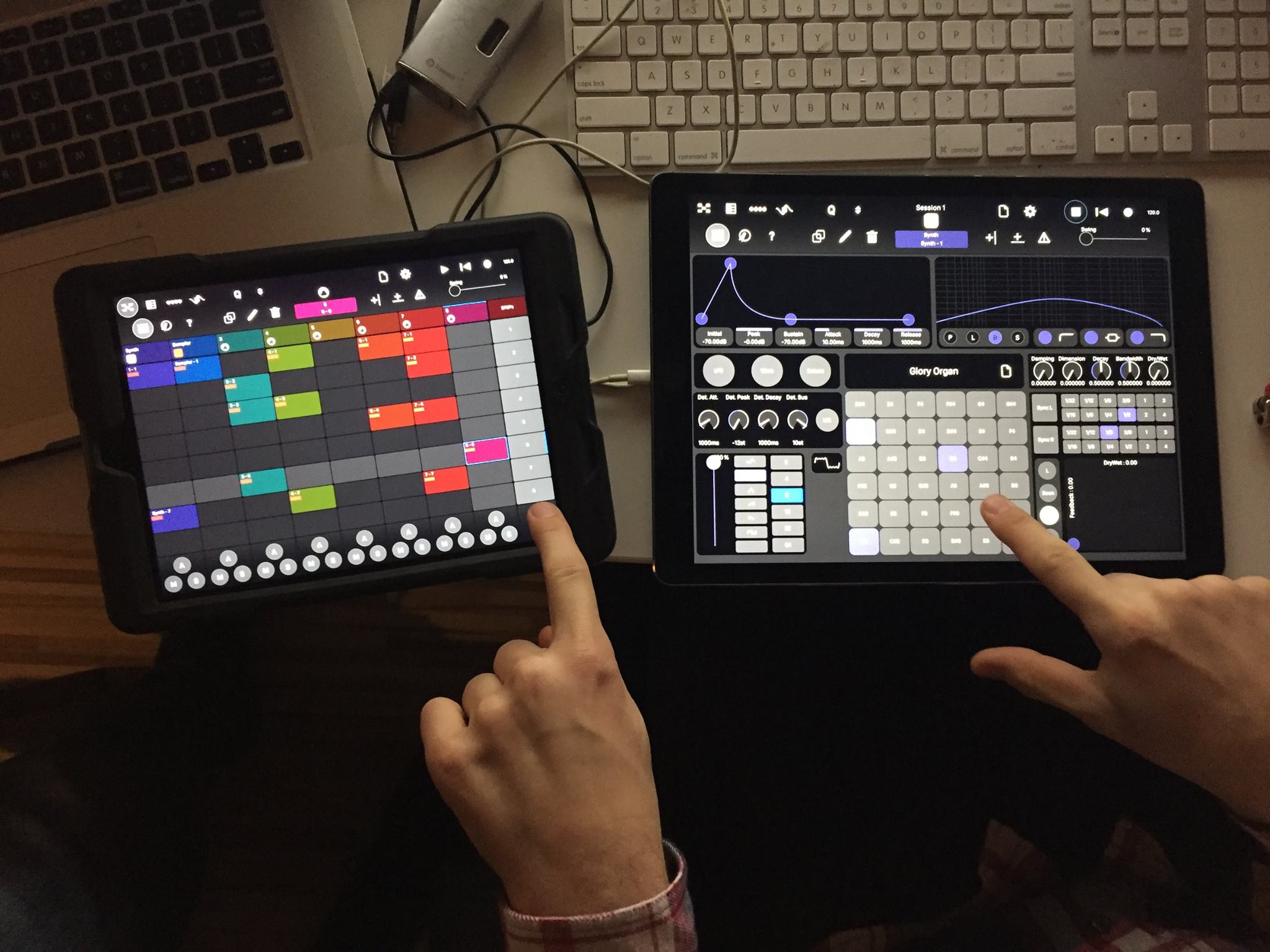 Modstep in action on the new iPad Pro, right, versus an iPad Air, left. Amazing what happens with screen real estate.

Modstep is not uncompromising in its simplicity. It has, in fact, a surprising amount of functionality packed into it.

But what is is is a tool that starts with step sequencing as its soul, then builds around it all the ways you might want to create to your other tools, and to creative sound design. It’s probably overwhelming for the absolute beginner Auxy is targeting, but then it becomes immediately appealing the moment that same user buys a KORG volca series or (we hope) a MeeBlip. 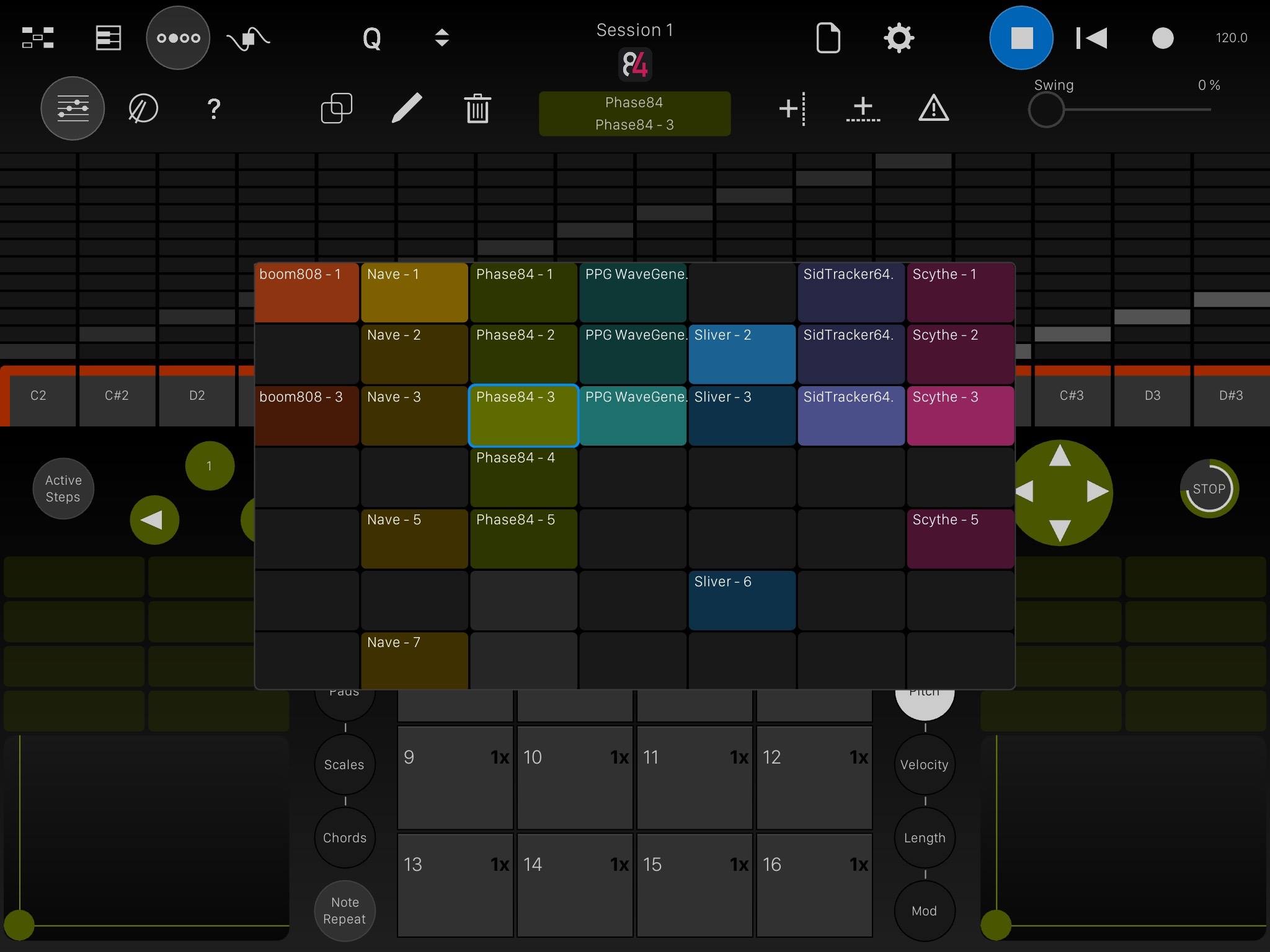 Steps and clips are at the heart of the interface.

This preview does a nice job of walking you through what that means:

Now, as it happens, I know the entire development team (they’re friends), and in particular lead developer/designer Benjamin Weiss is my studio mate and collaborator on the Nerk/Kirn project. Our music is even in that trailer. (I’m waiting on the royalty check.)

Whatever bias that may make me feel (and those of you who know me knows I’m biased toward generally arguing with my friends), I have gotten to watch it evolve. I was frankly worried along the road about feature creep and complexity.

But with version 1.0, I finally get a sense of where they were going. 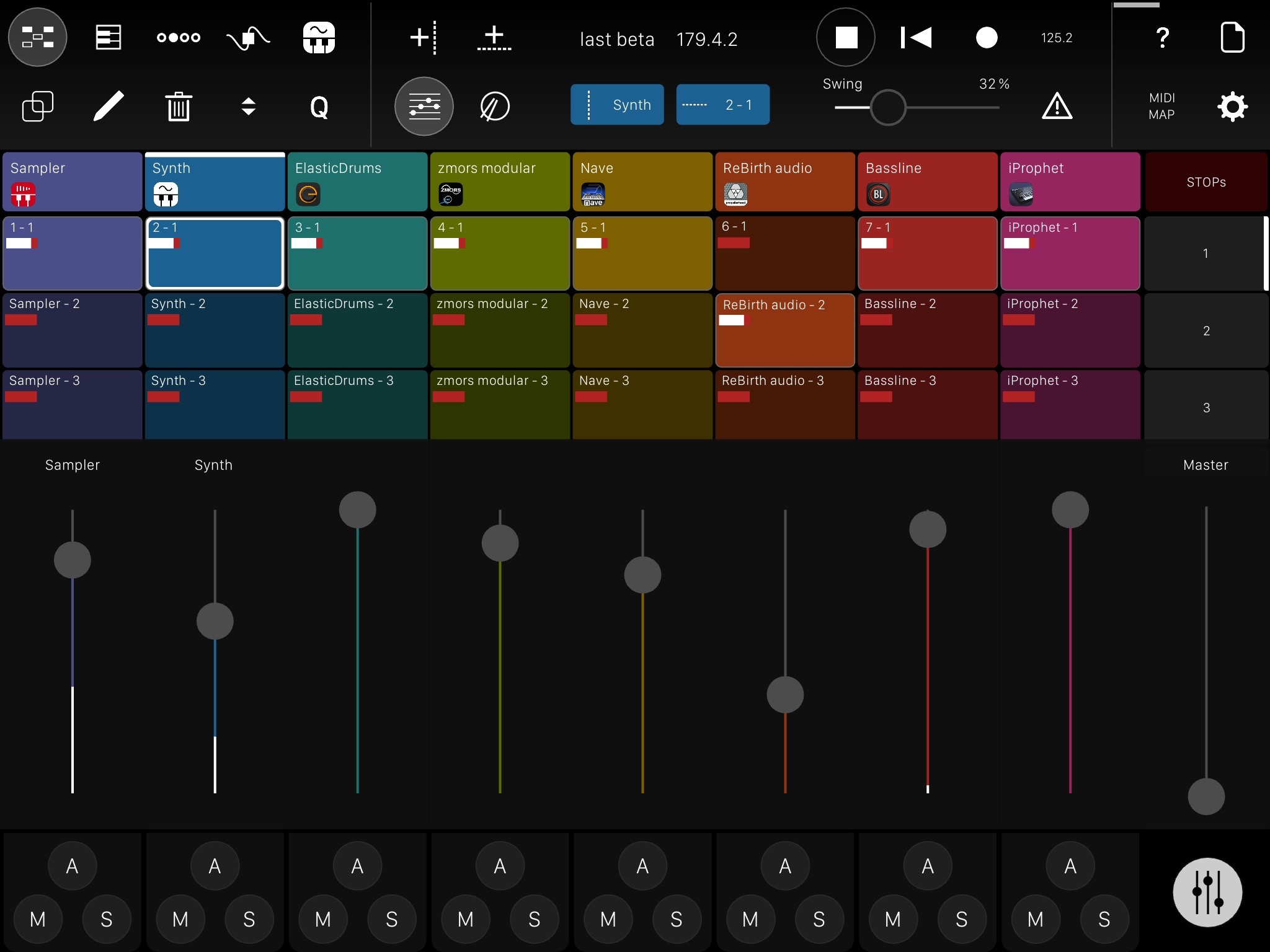 It lets you build patterns with live input, steps, clips, and sets. The core “atom” of Modstep is a step sequencer, complete with sliders and the like. But you can also play music live (with chords and with note repeat if you choose), and chain and loop patterns into bigger sets. An Ableton-style clip view keeps everything organized. That means you can approach this as a simple monophonic XOX sequencer, or go nuts with tons of patterns. And… sorry, Elektron lovers, but that also means an iPad Pro is a compelling competitor for an Octatrack. It’ll be fun to watch those camps duke it out, actually.

It’s a hub for hardware. With full MIDI interface support and the ability to both control Modstep from external gear and use Modstep to control external gear, Modstep is a return to the days when a dedicated sequencer was the hub of your workflow.

It’s a hub for apps and for sequencing desktop software. Want to control synths on your computer or your iPad instead? Or add in instruments and effects from your iPad, via Apple’s Inter-App Audio (IAA)? Modstep acts as a central music-making tool for the apps you’ve collected, too. There’s even a built-in IAA mixer. 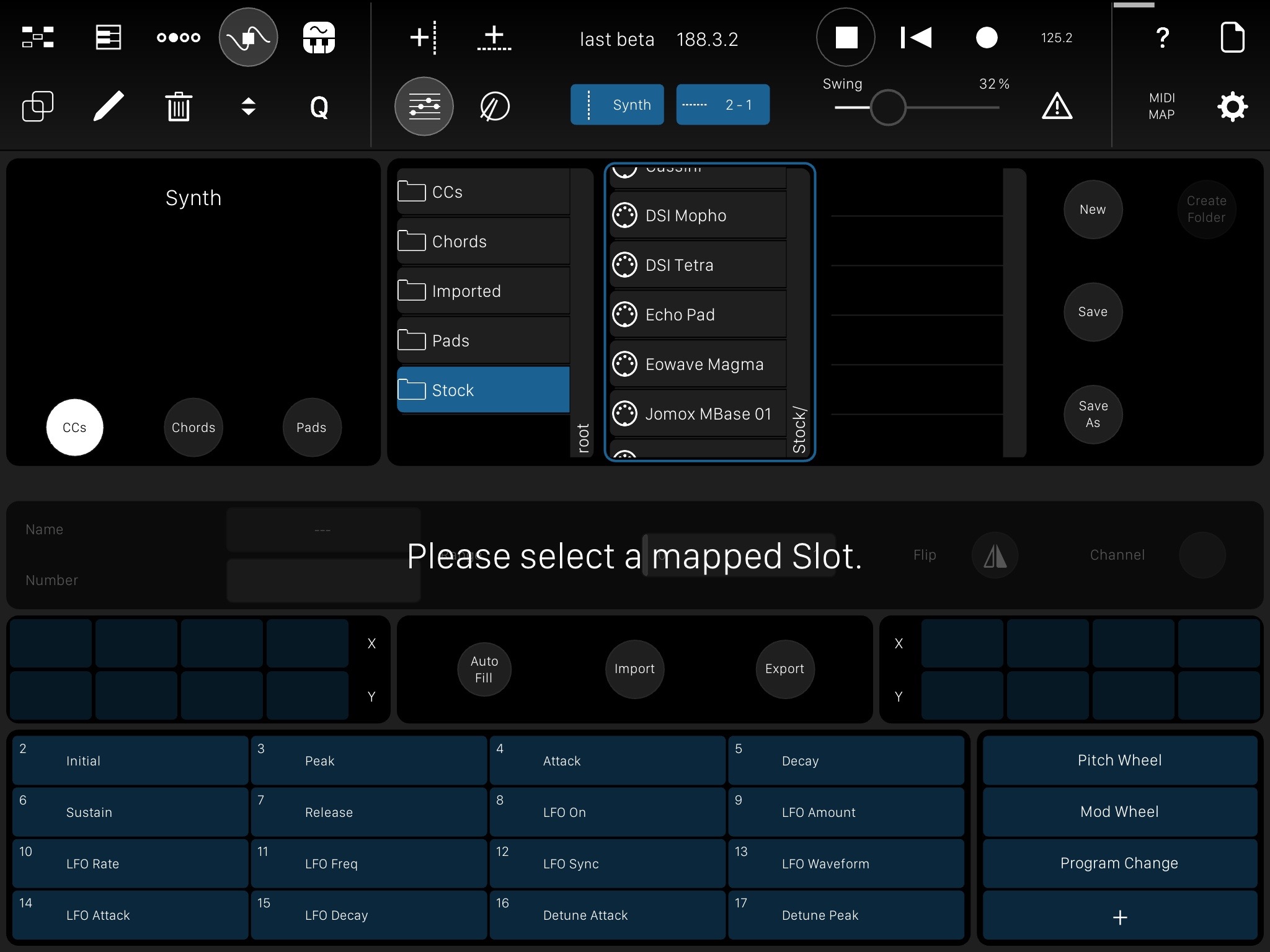 The powerful template editor, which comes pre-equipped with a library of useful templates. That makes Modstep a librarian as much as a sequencer.

It uses templates to keep track of everything. If you’re going to play and modulate hardware and software, you want access to all the parameters on those instruments. A custom template editor, plus a bunch of built-in templates (like our own MeeBlip) let you make Modstep into a kind of sequencer/librarian.

It’s got its own synth and drum sampler. If Modstep were just a sequencer, it would fall silent whenever it was disconnected from external gear or apps. Instead, Modstep here works with a built-in drum sampler and synth. The drum sampler is especially nice, because it means Modstep on its own is a workstation for sampling and arrangement. 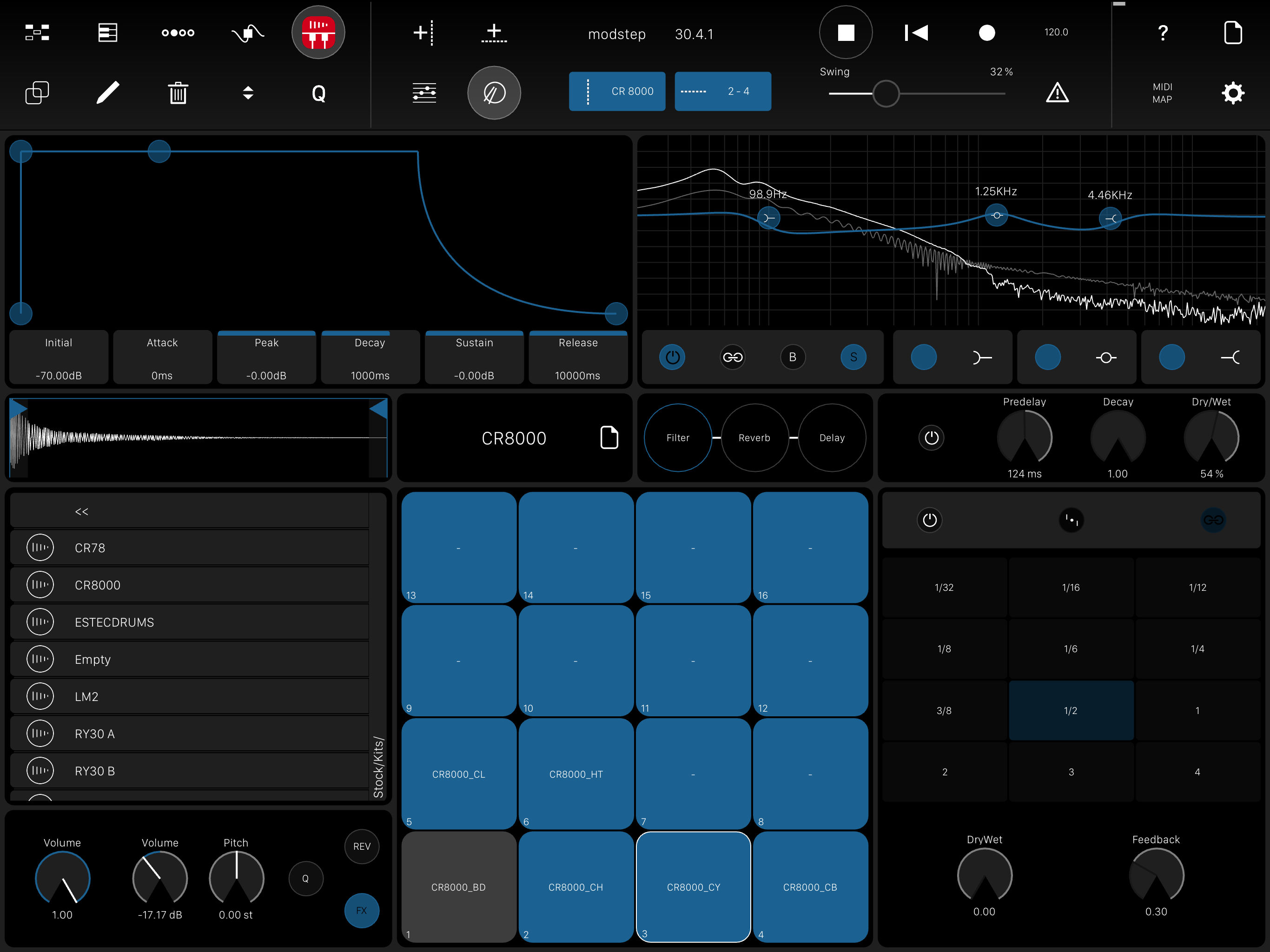 Also, having watched Benjamin in the studio, I’ve been slowly converted to the Modstep way of doing things. The combination of hardware templates with extensive modulation editing means that any sequencer immediately gives you tremendous control over that gear. (I’m still more, ahem, minimal in my modulation than Mr. Nerk.) And if you aren’t playing MIDI lines on pads or keyboards or other physical inputs, it’s hugely useful to have Modstep around as a sequencer. I’m on the road a bunch this month, so I may find that a lifesaver, because I won’t have my controllers around. 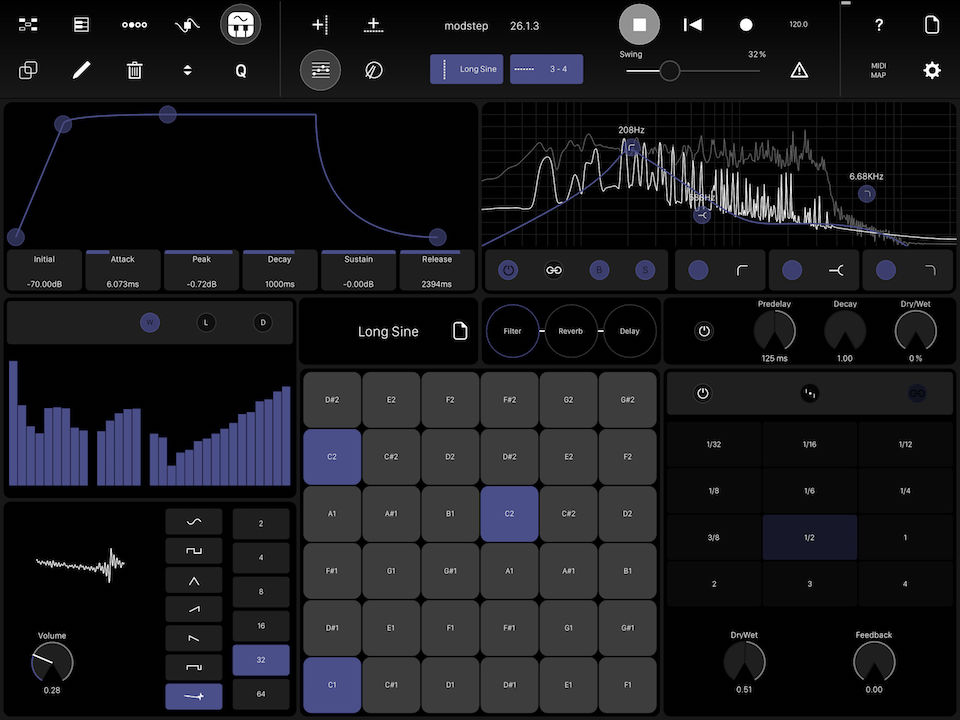 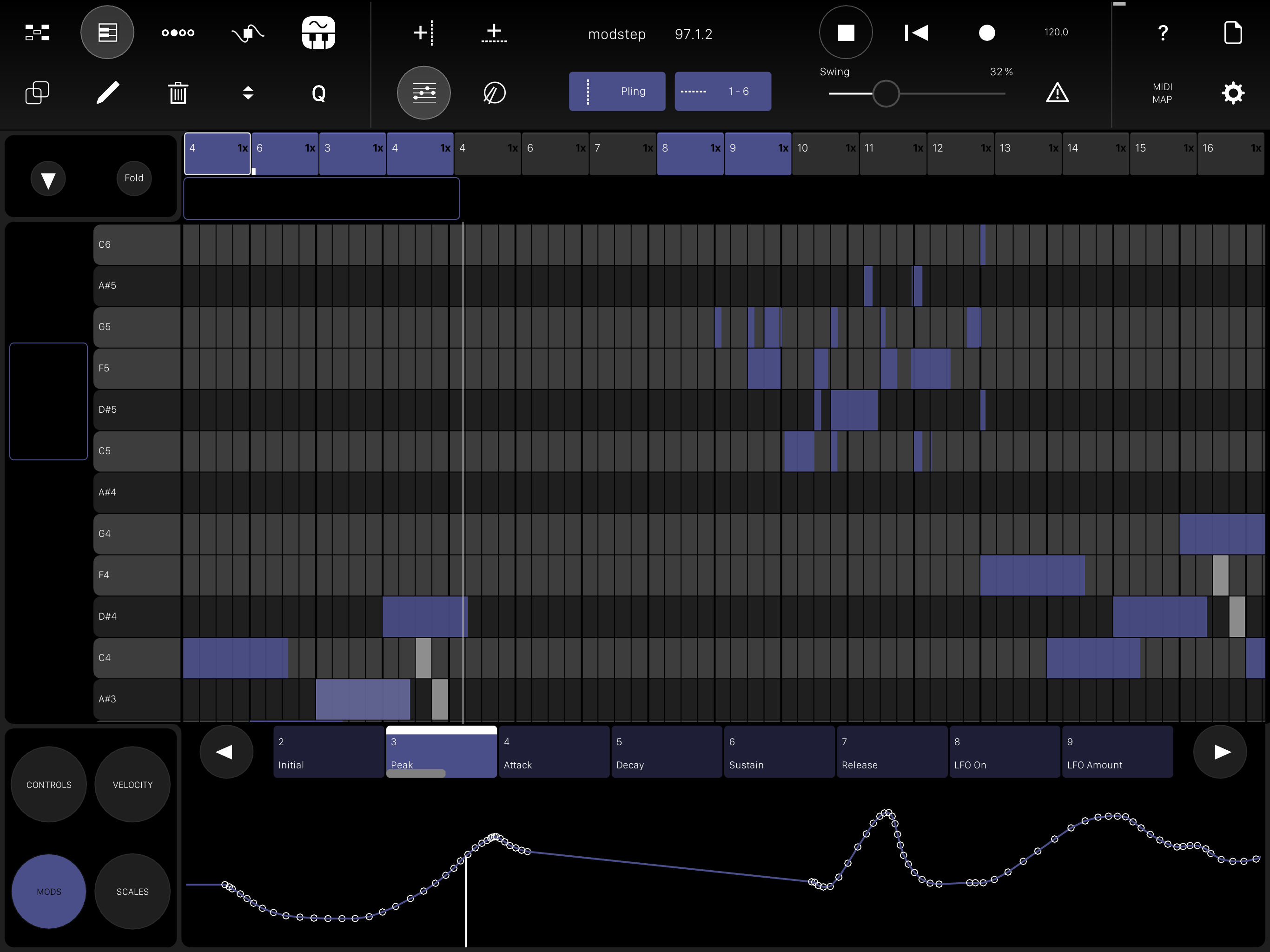 And some of the musical workflow features that become available:

1. Gives you up to 256 steps per track so anything from 1/256 to 256/256 steps.
2. Unlimited tracks (RAM and CPU dependent of course)
3. Able to set each track to desired length (Polyrhythmic fun)
4. Clips which contain tracks and give you ableton style clip launching paradigm.
5. Unlimited Clips
6. XOX style input AND Pianoroll for finer adjustment
7. All tracks can be used for Drums/Polyphonic Chords/Mono
8. Sophisticated pattern chaining/looping/muting/solo.
9. Scales
10. Stable external Midisync (swingable)!!!
11. Can copy, edit and record data in realtime without stopping playback
12.128 CC’s per track
14. Edit step velocity/length/CC modulation/shift left and right/transpose
15. Note repeat

I suspect for many of you, this epic feature list is probably making you want an iPad if you don’t have already. So, which iPads are supported?

Actually, this could be a chance to keep an older device from collecting dust – or an excuse to look for someone who wants to sell you (or give you) even their first-gen iPad.

As long as you’re satisfied with just the MIDI portion, even that first-gen model will work. (And they have a really lovely screen and terrific touch input, so it’s a shame they’re just getting recycled or shelved.)

iOS 8 is listed as a requirement, but you can even use an earlier version. Modstep confirms to CDM:

Now, all of this should make it clear than an iPad can become a dedicated tool for music making. In fact, it might make the iPad Pro look more appealing. But there are ways you could use this with a computer, too. The developers of Modstep also made my favorite iOS-to-computer MIDI and audio connection tools, Midimux/Studiomux. So, naturally, you could use Modstep connected to a laptop not only as a controller, but also streaming audio from its internal synth and drum sampler (and connected apps) back to a desktop DAW for more serious arrangement, editing, mixing, and processing.

Version 1.01 is coming, too; Modstep tells CDM that will bring some significant bug fixes as well as support for Ableton’s Link technology. Link will be a huge boon: it’ll let Modstep users jam together, wirelessly, with a couple of iPads, or let you sync up with Ableton Live.

Modstep is US$19.99 on the App Store. We’ll have more videos showing how to work with it over coming weeks, no doubt.

And let us know what you think.

(Speaking of, if you’re in Ukraine or Albania, I’m curious to hear from you – seems Modstep is tearing up your app charts.)

A flock of iOS devices can now jam with Ableton Link

Try a free generative holiday Ableton app, in your browser