Premiere: Lose yourself in these cutting-edge modular productions

Twirling timbres of Tiptop titillate, tantalizingly… a modular synth maker has made its own music label, and to kick things off, CDM gets the premiere of a hypnotic music video.

First, the music video, made for the compilation’s opening track by Matt Lange. It’s the work of director Nicola De Luca, and I have to admire its simplicity: an entrancing rotating blossom, sculpted in video in a series of horizontal delays and three-dimensional transformations.

The video is a metamorphosis of forms that investigates kinetic connections between the motions of rotation and material decontextualization of objects. It takes inspiration from active art precursors, from Cubism and Futurism to more contemporary artists like Davide Quayola and Alva Noto.

Lange’s music, too, is a favorite of mine: rich, spectrum-tickling ear candy. Say what you will about Deadmau5; this is his circle at its best, and Lange represents the exceptional level of production quality North America can reach. Joining Zimmerman’s Mau5trap label, Lange’s acrobatic technical skills positively glow in the record.

The compilation might not be what you’d expect for a record of modular-made music. Tiptop Audio Records is the label outgrowth of Tiptop Audio, the modular synthesizer manufacturer started by Gur Milstein in Hollywood California, part of the new wave bumper crop of Eurorack that renaissance has brought.

But what you don’t get, despite the synth nerd provenance, is a bunch of people noodling aimlessly on modulars (not that there’s anything wrong with that). 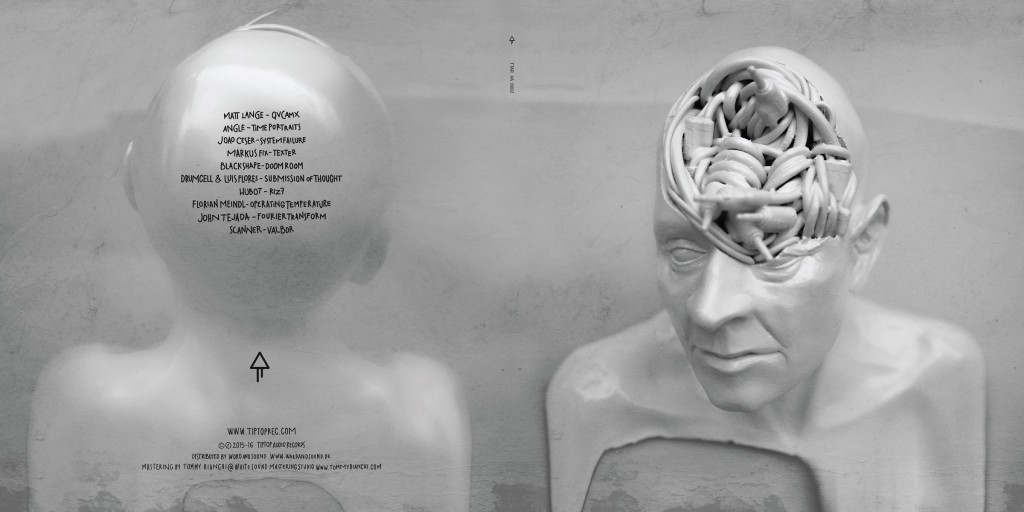 Instead, you’re treated to a sampler in technical skill, carefully composed in intricate rhythms and thoughtful song structure. It’s something both likely to appeal to lovers of sound design and musical imagination, with a fair balance of club grooves in the mix. This is not the usual parade of compressor-smashed 909s and ever-more-distorted industrial goth music (again, not that there’s anything wrong with that). It’s a buffet of pristine, precise electronic creation. That’s probably a good thing: these compilations are to the modern splurge-spending modular buyer what audiophile records were to home stereo buyers.

Also – ceramic sculptures of brains made up of modular, bonus.

That’s important: if this didn’t hold up as music, there wouldn’t be much point. (And we may get more of this – with labels tough to finance, having a healthy synth business could be a useful prerequisite.)

Drumcell represents more of the industrial sounds heard around Berlin, but doesn’t lose any clarity in production value (that is, this isn’t another warehouse reverb-drenched puddle). And Drumcell has been doing some amazing live sets around lately, from America to Europe.

Techno tracks by Hubot and Florian Meindl venture into Berghain-ready hocket hypnosis territory – something I suspect is generating a lot of the demand for Eurorack in the techno scene. Those are no less high-quality as productions, though.

Scanner and John Tejada I think are some of the more interesting outings here. John Tejada’s musical skills are always worth a listen, and Scanner’s strange, otherworldly cinematic synth ensemble is both the weirdest and most compelling on the record.

The first compilation is worth a listen, too, including some of electronic music’s best virtuosos – live or in the studio – as in Blawan, Surgeon, Kink, and Richard Devine. And that’s the proof in these compilations: if modular boxes covered in wires make sense to them, then so be it.

On the other hand, what is missing in Tiptop’s two compilations and artist lineup is much in the way of diversity. If techno grew out of people abusing disused turntables and drum machines in towns like Detroit, Tiptop is doing little here to dispel the popular notion that modular is a playground for rich white suburban kids, mainly in the States and Europe. And if that is the message people read, it’s too bad. The electronic scene I know (including modular, at least to some extent) is far more than that. But if you can avoid looking at the mug shot thumbnails on the artist page and close your eyes, you may still hear sounds you can identify with – and I hope the people inspired by those sounds both assemble some rosters and go play some gigs that look a bit more varied.

Whether “modular techno” is a thing or not as the PR claims, this does sound like forward-thinking techno, just at the moment that a lot of releases are looking backward. Modular fetishism may be in full force here, but if we’re getting some fresh takes on sound design, I think that can only be a good thing.

Conversations in live techno from the Polish underground

Tested: Apple finally lets you charge and use USB on iPad

artistsinspiration
Support Dirar Kalash, experimental multi-instrumentalist behind Sonic Liberation Front
modular
Compusynth is like a love child of a west coast modular and the Altair 8800 computer
artistsvideos
Paik’s Video Study is a 700-piece archive of the work of Nam June Paik
modular
Faded Instruments has a line of candy-colored 1U tools – easy modular stocking stuffers