Hack – listen to one LED create its own micro rave

Surprise: there’s a little tiny rave hiding inside a flickering LED lamp from a toy. Fortunately, we can bring it out – and you can try this yourself with LED circuitry, or just download our sound to remix.

Amine Metani arvid
But let’s back up and tell the story of how this began.

The latest edition of our MusicMakers Hacklab brought us to Leuven, Belgium, and the Artefact Festival held at STUK. Now, with all these things, very often people come up with lofty (here, literally lofty) ideas – and that’s definitely half the fun. (We had one team flying an unmanned drone as a musical instrument.)

But sometimes it’s simple little ideas that steal the show. And so it was with a single LED superstar. Amine Mentani brought some plastic toys with flickering lights, and participant Arvid Jense, along my co-facilitator and all-around artist/inventor/magician Darsha Hewitt decided to make a sound experiment with them. They were joined by participant (and once European Space Agency artist resident) Elvire Flocken-Vitez.

It seems that the same timing used to make that faux flickering light effect generates analog voltages that sound, well, amazing. (See more on this technique in comments from readers below.) 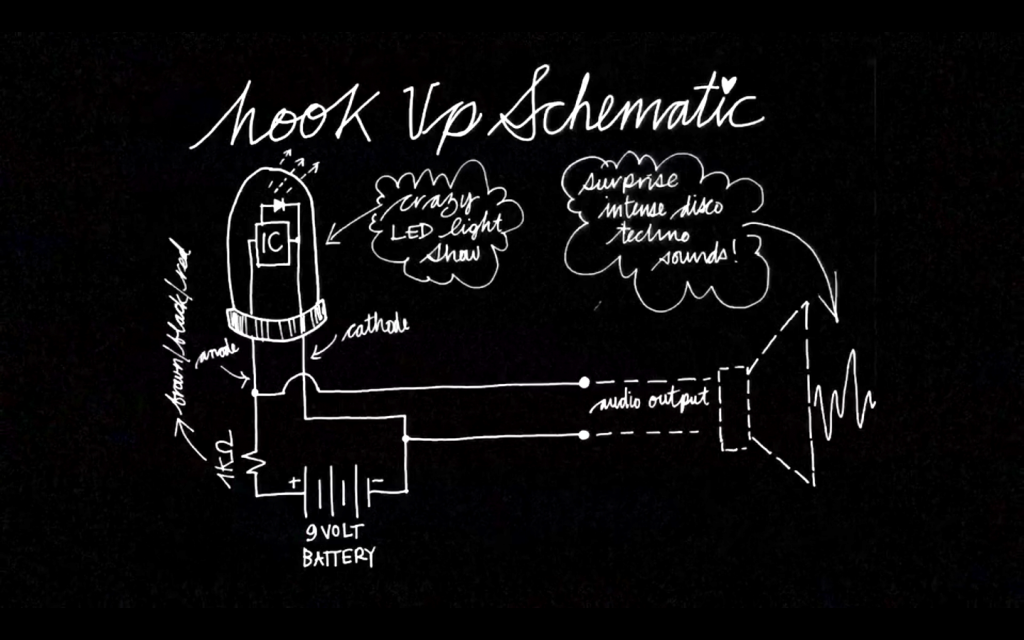 You might not get as lucky as we did with animated LEDs you find – or you might find something special, it’s tough to say. But you can certainly try it out yourself, following the instructions here and on a little site Darsha set up (or in the picture here).

And by the popular demand of all our Hacklabbers from Belgium, we’ve also made the sound itself available. So, you can try remixing thing, sampling it, dancing to it, whatever.

Here are 3 epic performances on modular that aren’t noodling