If it feels at times like everything has been done in sound synthesis, every new sound uncovered, then look to physical modeling for a way forward. This collection of techniques simulates the way sound is produced by acoustic objects. Applied Acoustics Systems (AAS) of Montreal has been one of the leaders in that field – and they’ve got a new product out that might be the friendliest offering in this field yet.

By modeling the physical world, instruments based on these techniques can fool the ear into thinking they were recorded from actual acoustic instruments. You can do that with sampled instruments, of course, but that can mean piling on gigs and gigs of storage-sucking recordings to capture every nuance. Physical modeled instruments fit into just a few megabytes of space. And that’s just for simulating “real” sounds; you can also bend these models to create hybrid instruments and new timbres that don’t exist in the real world.

There actually aren’t all that many complete physical modeling instruments out on the market. And apart from Apple’s Sculpture, those from AAS are probably the most widely used (apart from basic Karplus-Strong implementations here and there). The company offered Tassman, which it claims was the first physical modeling virtual instrument. (Among commercial tools, I believe that’s true.) And you’re even more likely to know AAS from their contributions to Ableton Live – Tension, Collision, and Corpus, plus the virtual analog synth named Analog.

But whereas Sculpture and the Ableton offerings have gone untouched, Chromaphone is an instrument that has continued to evolve. And that includes a version 2 offering that tames some of the things that have made physical modeling less accessible to audiences.

Before we go into that, it’s easier to show you the instrument in a video. Here’s a walkthrough I shot, exploring some of my favorite sounds and showing off the interface.

The trick about modeling acoustic instruments is that the unique sounds come from the interaction of different components. So, while it’s easy to model, say, a string or a drumhead on its own, the sound you know comes from the way these elements interact with each other and the body of the instrument. AAS says that for Chromaphone, they’ve used their own proprietary “coupling” tech to model this influence of different acoustic components on one another, and accordingly dub the plug-in an “acoustic object simulator,” not just another physical modeling synth.

Whatever the underlying tech, Chromaphone offers sounds that are to my ear uniquely realistic – reminiscent of other instruments (and definitely some of AAS’ own), but quite a lot more like the sounds described. 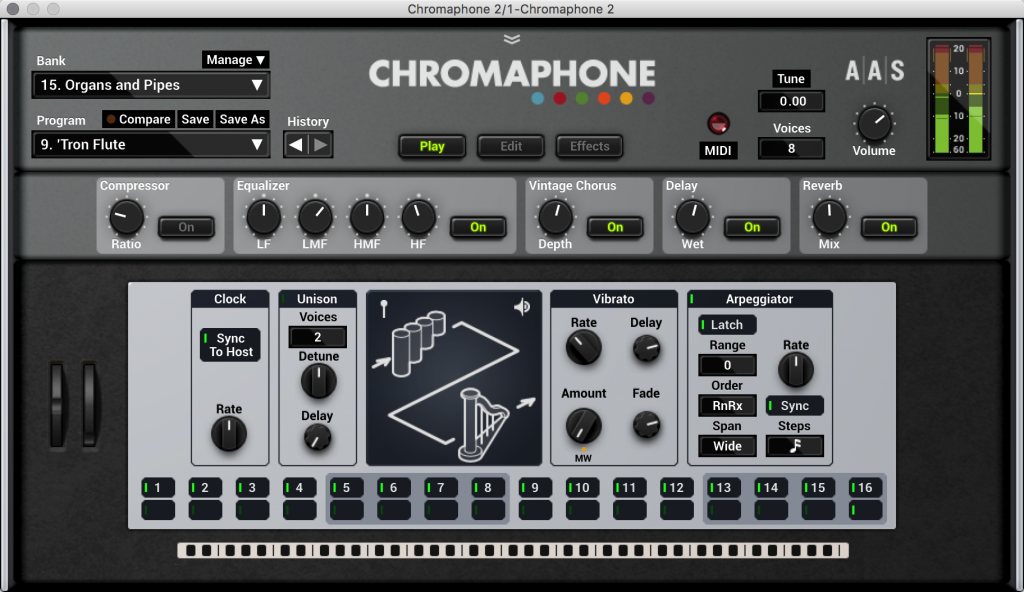 You get a whole bunch of instruments: drumheads, mallet instruments, plates, strings, tubes, and more. The mallet instruments are as always especially realistic, but there’s quite a lot of other stuff here, too. And you get samples that could work well for both melodic and percussive content. I’d love to make some techno with these sounds, for instance (maybe have a “no 909s allowed” rule for a month).

In fact, you could simply use this as a huge preset library, especially with a whole bunch of artist content included and still more add-ons. But if you did that, you’d miss the real fun of physical modeling, which is being able to tweak parameters to get unexpected sounds. And there, AAS has done two things that previous offerings – even their own – have failed to accomplish.

First, they’ve made the controls far, far simpler. That includes macro controls that allow ready access to easier parameters, to save newcomers from overwhelming tyranny of choice. But it also means better-organized advanced controls, too. These are grouped more logically, laid out more clearly, and made more visual than anything I’ve seen before. In fact, I’d go as far as to say Chromaphone is one of the best plug-ins recently as far as avoiding eyestrain, even as other more powerful plug-ins continue to cram in lots of functionality.

Second, Chromaphone finally avoids a lot of the unruly sonic characteristics of other instruments using the same techniques. I’ll be honest, part of what I love about Sculpture or Tension is their ability to suddenly go completely insane and produce some wild, distorted, ear-splitting sound. Physical modeling synths can be the sound design equivalent of a cornered badger. But does that make these techniques friendly to beginners, or to your studio monitors, or to your … ears? Uh, no. Not so much.

Chromaphone 2 seems to get around this. First, it seems that the controls are voiced in a way that avoids bad behavior. Second, AAS have sensibly included a built-in limiter so you don’t blow your speakers and deafen yourself if you do happen to paint outside the lines. Why doesn’t every such instrument do this? I have no idea.

Indeed, Chromaphone 2 includes so much over the original product that it’s almost an all-new instrument – and you’re very much forgiven if you missed the fact that Chromaphone 1 existed at all. 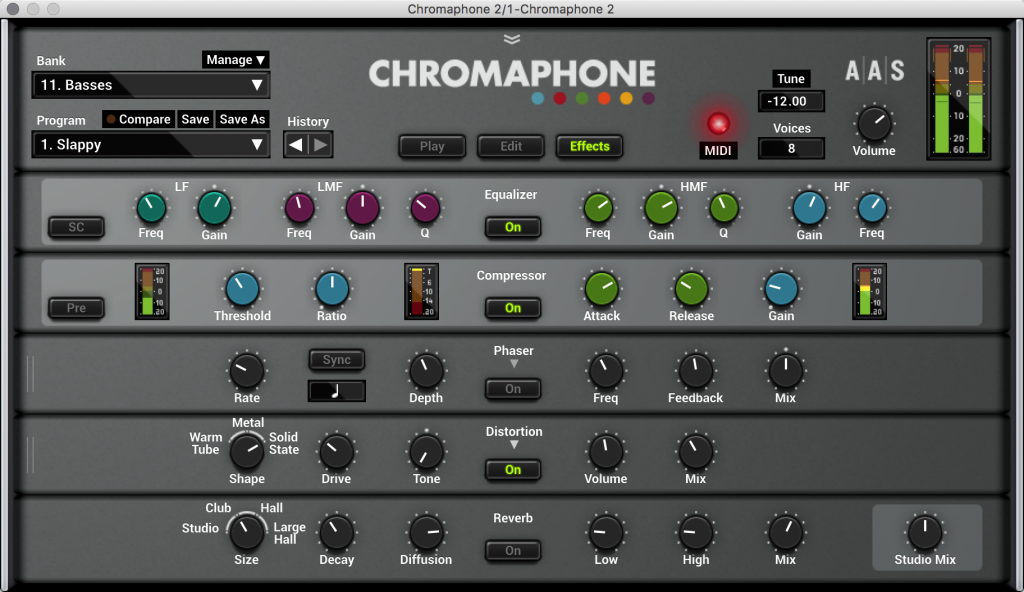 With any software instrument, though, I think the real challenge is not just to pack in a bunch of clever ingredients, but to make the whole feel cohesive. And Chromaphone does this with aplomb.

On the main screen, you can quickly browse presets and control performance/live-ready features like the arpeggiator, vibrato, and unison. But it’s really the Edit screen that’s fun. And users of AAS’ somewhat muddled Ableton instruments will immediately recognize how intelligent the new layout is.

To me, Apple’s Sculpture remains the most innovative UI for physical modeling, with its X/Y “puck” and lots of interactive visualizations of where pickups and hit positions are – certainly for string models.

Chromaphone, though, bests even Sculpture with a no-nonsense layout that feels like it came from a hardware synth. Clear visuals indicate which resonator model is in play, while everything else is assigned to intuitive sets of knobs. 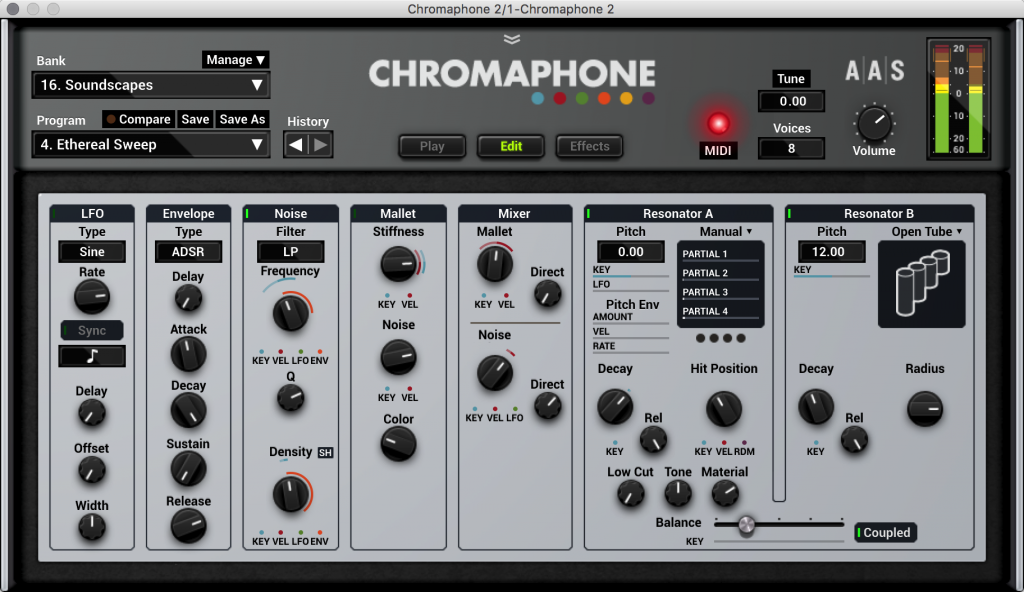 The edit screen makes even advanced edits accessible and understandable – including a manual mode that lets you define four partials.

There are plenty of models to choose from – string, beam, a dedicated marimba model, drumhead, membrane, plate, and closed and open tubes are on hand. And you can select a “manual” mode that lets you define four partials.

In fact, if I had any complaint about Chromaphone, it’s that sometimes it’s a little bit too tame. (Maybe I want some sort of big “danger” switch that lets me go off the reservation.)

Also, this is an instrument that is badly calling for support for implementing multi-timbral expression, so you can play it with controllers like the ROLI Seaboard RISE or Roger Linn Linnstrument. I can’t really call that a demerit, as it isn’t an official spec yet, but it is supported by software like Sculpture and Cubase, and it’d clearly make Chromaphone even more fun. On the other hand, the focus here on monophonic instruments means that most of the time, any expressive controller will still be fun to play.

Chromaphone is right now on an intro price of US$149 with a bundled sound pack, but even at $199, I think it’s a steal. Instruments like this are a reason to keep using computers as a sound source and not only outboard hardware. If you’ve been using the Ableton instruments, you owe it to yourself to try Chromaphone. And if you’ve been looking for a way to explore new sounds, this should be way up on your list.

I fully expect to get lost in it for some time to come.

Chromaphone is a plug-in for Mac and Windows.