Video killed the radio star. Streaming killed downloads. Home taping is killing music. Is the cloud about to kill the mastering engineer?

Landr, the instant online mastering service, already looked a bit that way. The drag-and-drop service lets you download a track that is algorithmically mastered – no humans directly involved. The service says those algorithms were carefully tweaked not only by DSP engineers, but actual mastering engineers. It isn’t like the “mastering” preset on a compression plug-in your DAW; according to the developers, the system is adaptive and learns from analysis by genre of music uploaded. And it covers a lot of processes – multi-band compression, EQ, stereo enhancement, limiting, and aural excitation, with some manual adjustment provided to the user.

Now, there are various reasons why I wouldn’t trade a human mastering engineer for this – even if Landr sometimes achieves good results. I really rely on a human mastering engineer as a final pair of ears. That person may be the one who finds mistakes, or who judges professionally just how loud a track ought to sound in the first place. (The very existence of the manual controls here more or less eliminates its utility to me.)

But maybe Landr is finding its own place – one in which a mastering engineer actually can’t compare. And that’s its unique ability to happen instantly right when you upload a file. Like Instagram filters and the auto-contrast on your digicam, spell-check and the location finder in your Google maps app, Landr’s instantaneous, automatic operation is the whole point.

Let’s be honest: you upload something quickly to SoundCloud, you want it to sound loud (and good, but especially loud) right away.

Landr now links directly to SoundCloud to make that happen. Connect your SoundCloud account, and either log into Landr or create a new account (requires just an email and name). 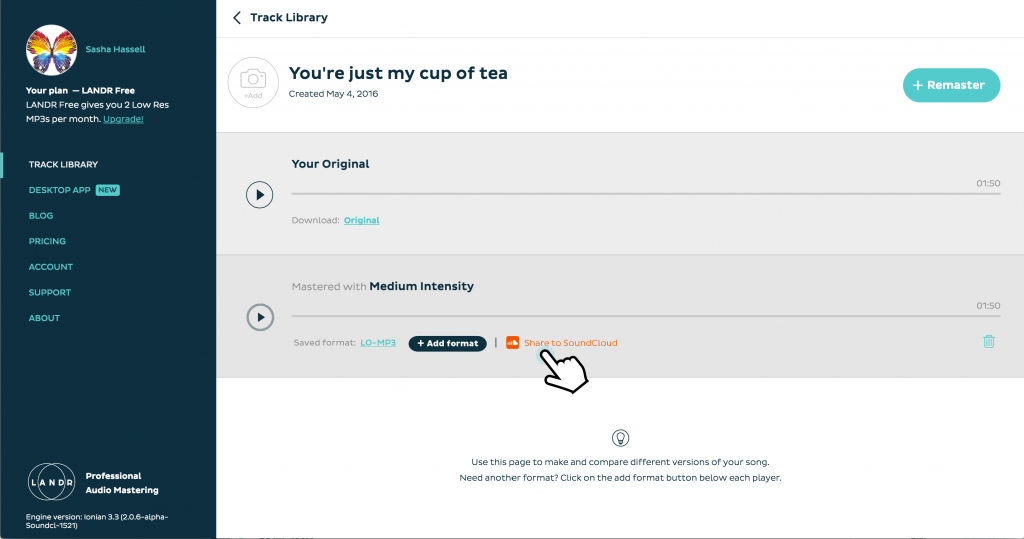 For me, at least, Landr gave me four free WAV downloads. I’m going to do some testing of that and get back to you. As for SoundCloud, you get unlimited free uploads “optimized” for that service. Since Landr is normally paid, that’s already a reasonable deal. The finished, mastered tracks are uploaded directly to your account.

The move may say as much about SoundCloud as it does about Landr or mastering. It’s clear the world’s leading sound upload service wants to continue to offer a complete solution for sharing noises. And while users panic about rumored changes to licensing or other hype (more on that in a separate story), there is some evidence that SoundCloud still has ideas for how to lure you to upload to their site specifically.

So, whither the mastering engineer? I don’t think so. Apart from the factors above, the mastering engineer’s service have already expanded from just sending you a stereo master, to being associated with digital distribution and vinyl cutting. Landr’s biggest competition may be not mastering engineers, but “turning up the knob on your compression plug-in” – and there, I think Landr has the edge.

But beyond that, pay attention to this one. It’s the latest evidence that the sharing of music online changes more than just how you listen. It does also change how you produce. 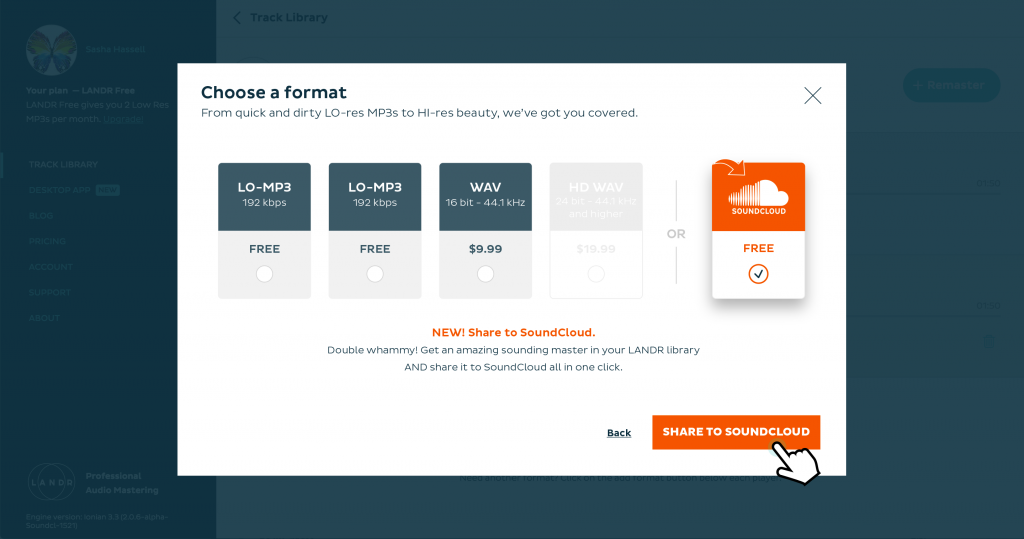 A free SoundCloud option is now available once you connect your account to Landr.

Virginia’s Fierce For The Night brings the heart house needs