Facebook is all but happy to distract you. It can bombard you with instant messages, show you endless pictures of the babies your forgotten friends from high school have just popped out. Now it can do live video streams and spawn trending news. What it bizarrely doesn’t do much is play music.

And if you think about it, that’s pretty strange. If you’re a music lover, Facebook is full of musical knowledge about you. There are the artists and labels you like, and the music magazines and podcasts you follow. The problem is, finding the music they post is a huge effort. Unless those pages buy advertising, a lot of what they post never shows up in your newsfeed. And even if it does, it’s mixed with everything else – parties people are attending, political rants, pictures of what people ate for lunch. Some day, we’ll look back at this and say that was totally insane. (I hope.)

Once upon a time, it wasn’t like this. The “social network” of choice was MySpace, and music players were at the center of everything. (Oddly, MySpace at some point became a dating and hookup site before such things were popular, but still the music players were central.) Heck, even Russia has this figured out – VKontake (now known simply as VK) is every intellectual property lawyer’s worst nightmare, but at least it has a player. I can call up my own music more easily on VK than on Facebook.

So, it’s time to put some of that data to work.

Trainspottr is a brilliant solution to the problem. It’s a new, free app for the iPhone, by Berlin-based independent developer Maximilian Clarke. And it does one thing, really well: it makes a massive endless playlist of music on Facebook.

To do this, it digs into Facebook Pages. In other words, assuming you’ve been clicking “like” on stuff you actually like, you’re the one choosing what goes into this feed. This isn’t what Facebook’s algorithm thinks you’ll care about: it’s the latest stuff from the pages you’ve already selected. So, if you have a healthy mix of artists and labels and magazines and such, you’ll get a mix of music. 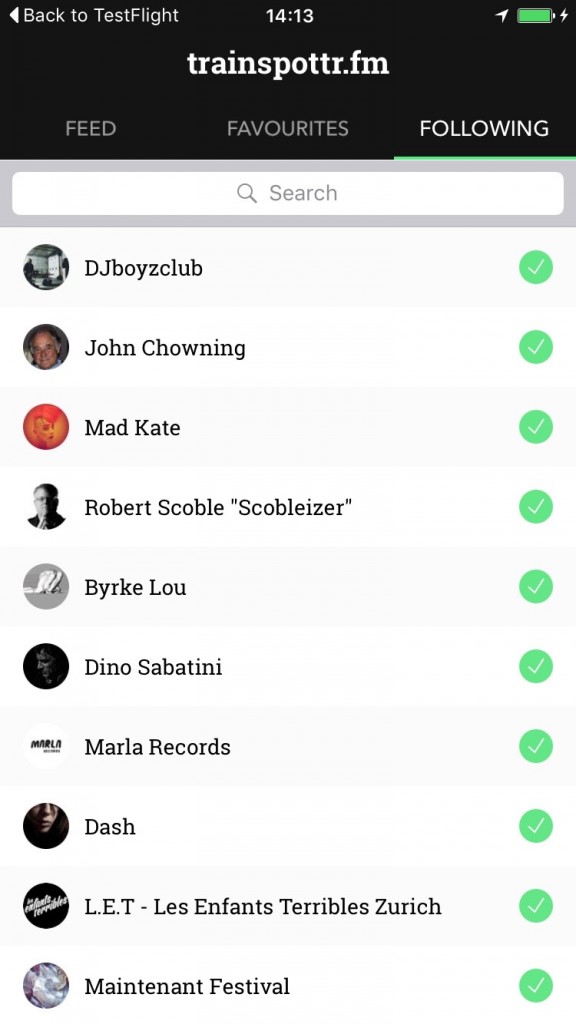 Then, you see a feed of the latest music they share. Here’s where Trainspottr is incredibly smart: it really dives deep into Pages to find music. So not only does it find players that were shared directly from SoundCloud, YouTube, and the like, but it even is clever enough to fetch tracks inside stories posted by magazines. For instance, you’ll see a link to a mix CDM put in a story in one of the App Store screenshots by the developer. We actually didn’t share that mix directly on the CDM Facebook page; it was inside the story. 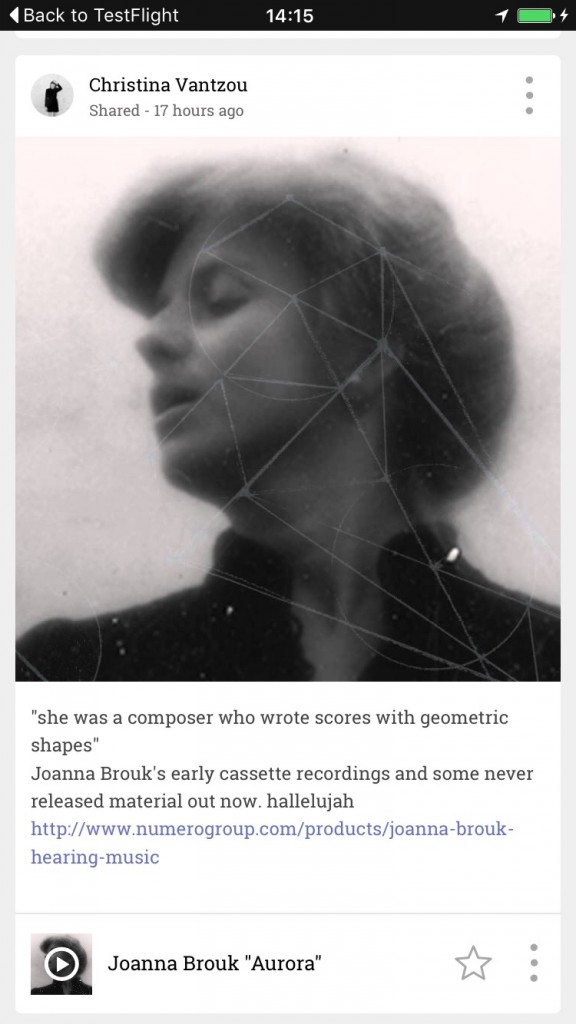 I think you’ll find Facebook is a lot more music than you imagined. Trainspottr is able to pull relevant audio, whether a mix or track was shared as a music video or a player inside a story or something else. And while Facebook itself tends to bury artists and labels once you’ve added them, here they’ll magically reappear. You also get the text posted to Facebook, so you get some context.

Note that it’s just pages – but that’s almost certainly for the best. You don’t care about a childhood friend you barely remember, especially if you haven’t already unfriended everyone who likes Nickelback. (I’m not kidding; that’s a common search – unfriending for musical crimes is a thing.)

In fact, I had some conversations with people who didn’t like this idea, because they were afraid it gave Facebook yet more authority. I think rather the opposite: Facebook has been burying music and controlling what you see and hear, and all these years later, they still don’t have good native music listening options. Here, you get a selection that has nothing to do with the vaunted Facebook algorithm and everything to do with your own selections. It’s a delightful form of digital digging.

The player can go full-screen, too, with easy swiping to switch tracks. I have mine iPhone on a stand within reach while I work. 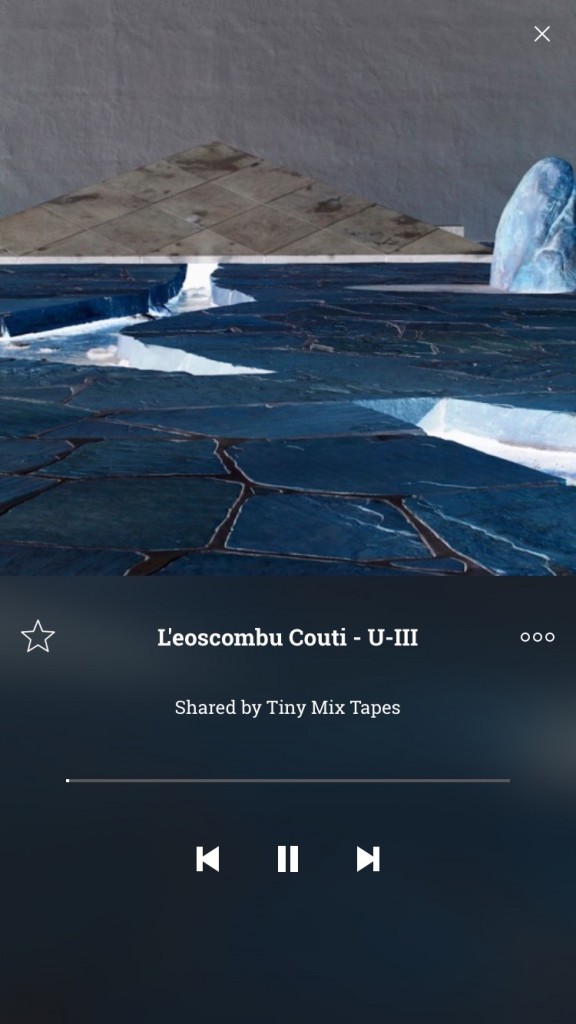 Plus – and this bit is crucial – you can bookmark “favorites” and comeback to them later. For me, this is a way to find tracks to go and buy from download stores later for my own listening or DJ sets, or save music I might want to write about or refer to other journalists. 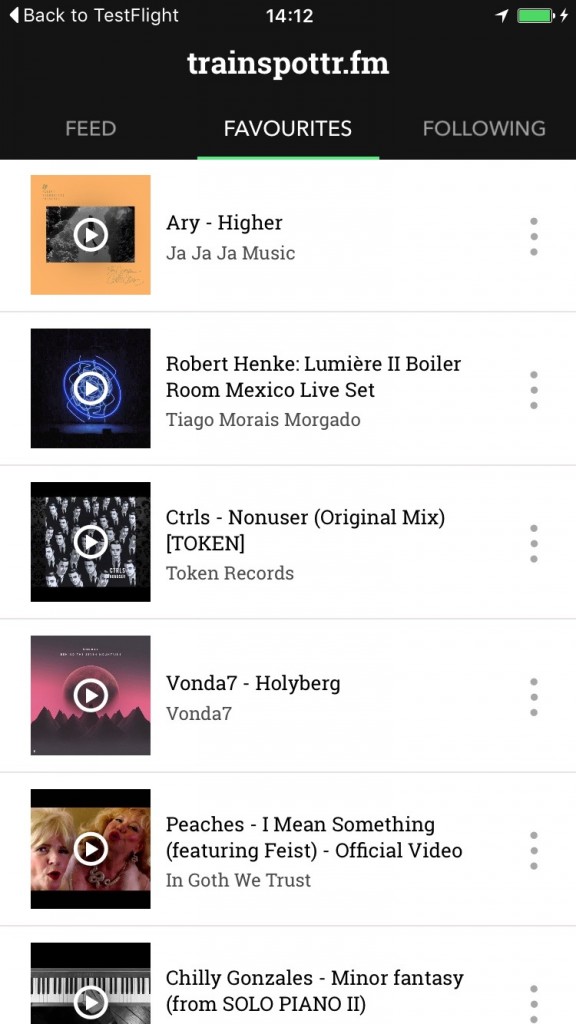 Trainspottr is iOS-only – there’s no iPad version and no other platform support yet. But I hope this is a big hit. And I hope it’s a wake-up call to Facebook that they need to do something here. Because I find a mix of music that isn’t available even on Spotify and SoundCloud. With all the great music out there, new and old, we need to make discovery easier and more personal, not harder, more commercial, and faceless.

So we need more tools like Trainspottr. It has changed my musical diet, for sure – it’s now right alongside SoundCloud and Bandcamp as ways I look for what’s new.

Learn audio skills as a game, free, with your ears as guide