It’s the end of an era – but maybe not such a golden era. Once upon a time, ACID and Sound Forge were each industry-leading software tools, originally developed by Sonic Foundry. Now, languishing alongside their stablemate, video editor Vegas, they’re seeing ownership pass from Sony (via its creative software division) to German software house and holding company MAGIX.

There are reasons to reflect on ACID and Sound Forge individually.

Big in their day

ACID wasn’t the first loop-based production tool (Propellerhead and ReCycle deserve a lot of credit there), but it was the tool that made time-stretched, loop-based production into what it is today. In fact, it was so influential, that it’d be easy for newcomers to music production to overlook. But the 1998 release of ACID (originally awkwardly dubbed ACID pH1) really heralded the arrival of music production workflows built on audio loops. ACID cleared the way both for Ableton Live and GarageBand. (Side note: I’d love to look at this history in more detail – and recall someone telling me that Apple even hired away the original creator or one of the original creators of ACID. The evolution of this sort of music software seems a story worth telling.)

Sound Forge, for its part, remains a favorite dedicated waveform editor. Originally Windows-only, Sony brought the software to the Mac just as OS X lost a lot of its own competition in that category. And that makes Sound Forge one of the few choices if you want an editor that focuses on editing audio files, from mastering to batch processing – things that DAWs aren’t necessarily focused on doing.

Sony announced on the 20th of May that they would sell essentially all of their audio and most of their video tools – including flagship editor VEGAS (also a Sound Forge creation) – to MAGIX. I’m embarrassed to say most of us didn’t even hear the news.

But the news is a milestone. I always admired the unique shared lineage of the Sound Forge line in audio and video media. That means that ACID takes a unique approach even in its most recent Sony release when it comes to features like keyframes and automation, one that it has inherited from the video world. Sound Forge has unusually robust integrated video features. And Vegas was always the one video editor that felt musical – in the mirror image of ACID, one that lets you take a metric, rhythmic approach to video editing if you so choose.

Avid might have bought Pro Tools; Apple might make both Logic and Final Cut. But those editors always seemed to live independently in their own paradigms. (I regularly get muddled switching between Logic and Final Cut, for instance. Yet it’s possible to edit entire audiovisual creations in Vegas.) 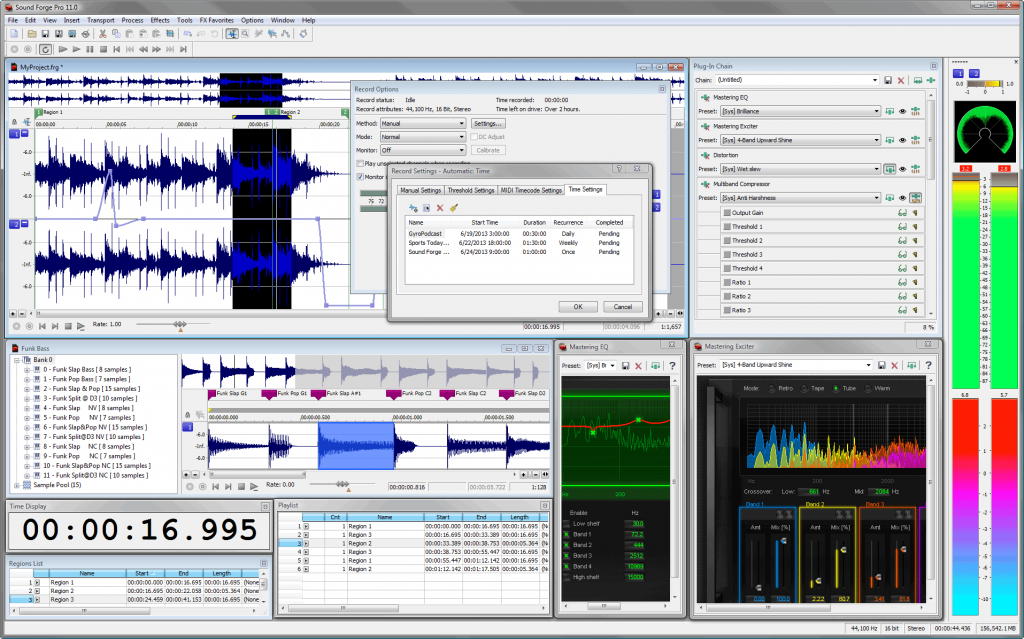 ACID in particular has languished under Sony ownership – just when it most needed to compete against breakneck development of Ableton Live, Reason, GarageBand, and even the likes of FL Studio. The last major release was way back in 2008, with the only real maintenance update in 2010 – a sad slow-motion death for what was once a great product.

Sound Forge has continued development, and might well have a future – this is a tiny niche, to be sure, but without much competition. (Whether that’s a good sign or bad is up to you.)

So who is the new owner? That’ll be MAGIX Software GmbH.

MAGIX is probably Berlin’s best-kept music software secret. Sure, you know Ableton and Native Instruments and SoundCloud and even Bitwig are here in the German capital, but MAGIX is less a household name.

PC users know them, though. They make various entry-level music and video software products, for one thing – making ACID and Vegas something of a logical fit. While that may seem weird, and while those tools don’t have the name recognition that GarageBand does, I’ve heard over the years repeatedly that some of these entry-level products in general do surprising volume numbers.

Even if MAGIX did nothing other than strip ACID for things like time stretching tricks, it might be worth it. (Even some big name products just use licensed algorithms.)

And MAGIX is also a maker of niche pro products – Samplitude and Sequoia might elicit a big “huh?” from Mac users, but some pro users on Windows live and die by them. That also suggests a good fit.

I also think it’s encouraging that MAGIX is no longer publicly traded. Music software makers haven’t exactly been Wolf of Wall Street material. (Well, depending on which scene you mean.)

MAGIX are neighbors of mine, so once the acquisition settles in, I’ll have to pay them a visit and see how these tools are faring. I have personally spent some quality hours with them. I would at least hope they do well. The market is far more mature than it once was, meaning that even older tools could get a second lease on life.

In particular, I do think Sound Forge could do well – last editor standing from the once-crowded audio editor category. Sound Forge 11 hit as recently as 2013, with everything from workflow improvements to new mastering tools; it saw at least some update as recently as last year. (Here’s a glowing review from ask.audio.) And there are still lots of reasons a dedicated editor can be useful – especially one with some video savvy. Not to mention, there is this nifty spectral editing tool SpectraLayers (also sold with the other tools):

Get to know Bob Moog in online pictures, artifacts

Meet the Subharchord, subharmonic organ of the DDR

MacSoftwareWindows
The best way to integrate Ableton Live and Eurorack modular – for any rig
Software
MIDI Polyphonic Expression has been updated with one powerful feature: better documentation
berlin
Watch live sets from Superbooth21: Jamaica Suk, JakoJako, Yann Tiersen, Pole, Bloody Mary…
Mac
May the 4th be with you, in a new documentary on the sounds of Skywalker