Berlin’s Tresor club turns 25 this year, celebrating with a four day festival next week. And the lineup is just completely and totally insane. If you took, say, the Thursday night program out of context, you might be excused for believing it was the headliners for an entire festival.

The festival says as much about the healthy state of techno as it does about Tresor – but Tresor is without question one of the venues at the center of that world.

The timing comes just days after the revelation that Tresor founder Dimitri Hegemann will open a museum in the same cavernous power plant that’s home to Tresor, Globus, Ohm, Kraftwerk, and his other venues.

Now, as Mixmag reports, Hegemann “prefers the Living Archive of Electronica as a title for the venture, stating that the term ‘museum’ denotes “something that belongs to past.”

But that might as well be watchcry for Tresor in general. On any given week, Tresor is indeed a living archive – this is a place where the Detroit – Berlin axis thrives, where classic records can still pound away in the basement. Regulars tell me that the experience inside is very much as it was in the original Tresor.

That might tend to “museum” territory were it not for a lively ongoing set of programming. There’s a consistent balance between old and new on the weekend Klubnacht. There’s support for ongoing innovation in live sets and quality DJing. There’s Wednesday night’s “New Faces,” which might stretch the emerging artist moniker a bit far (some of the lineups are reasonably well established), but does at least pull together music on a weekly basis around curators who are able to push their vision ahead of what’s likely to create a queue, and indeed help develop some new talent or talent that isn’t as well known in Berlin. And that’s to say nothing of programming like Berlin Atonal festival or oddball emerging parties at Ohm (the power plant’s former battery room).

I still haven’t gotten to the festival lineup, but I think it’s important that it’s against that background. So Tresor 25 will accordingly take over all the venue’s major spaces – the impossibly huge cavern of Kraftwerk (the main power plant space, several times larger than Berghain), Ohm, Globus (the wooden-floored upper room), and Tresor (the one with the blinky lights and classic cage).

Into that vessel pours a who’s who of techno precisely because Tresor has been such a healthy patron to so many techno artists. It’s safe to say Detroit mainstays get a warmer reputation in Germany than they do in their own city. Berlin locals are there alongside artists from around Europe. 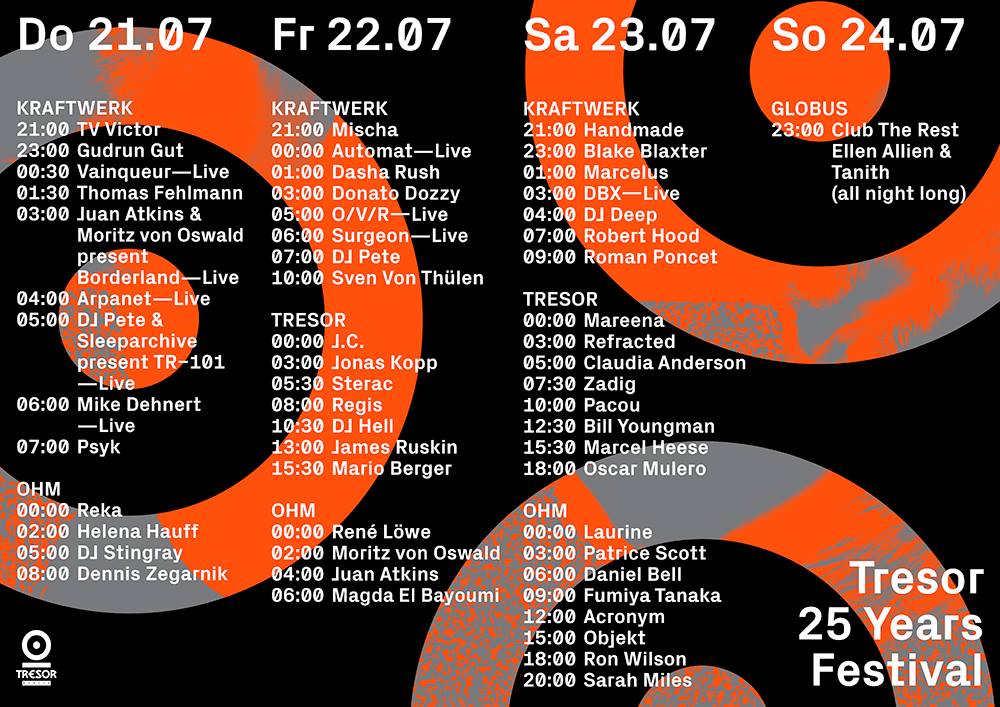 Highlights for me: Daniel Bell, playing live as DBX, represents one of the best specimens of live techno around. Robert Hood is back with his own unique sound. There’s Dasha Rush and Donato Dozzy, too, some of the artists who have most inspired me down in the basement (and Dasha has also provided some of the highlights of the past years there with her own takeovers).

The home team: Tresor Records artists Pacou, Bill Youngman, Zadig, Claudia Anderson, residents Mareena, Refracted, and Marcel Heese. Actually, there could easily be a couple more weeks of programming here – that only scratches the surface of the record label and residents.

You get the likes of Juan Atkins and Moritz von Oswald as Borderlands, DJ Pete and Sleeparchive as TR-101. But you also get pioneer Gudran Gut, people like Helena Hauff, Magda El Bayoumi, Psyk, Reka. This is a diverse lineup of men and women from the scene, suggesting techno that’s expanding, not contracting.

And this isn’t just about big headliners on big stages. Part of what I think will create a unique atmosphere is that legends like Juan Atkins and Daniel Bell will also be found in the intimate environs of Ohm.

Side note: when the museum of techno does open, I imagine it won’t be anything like this. 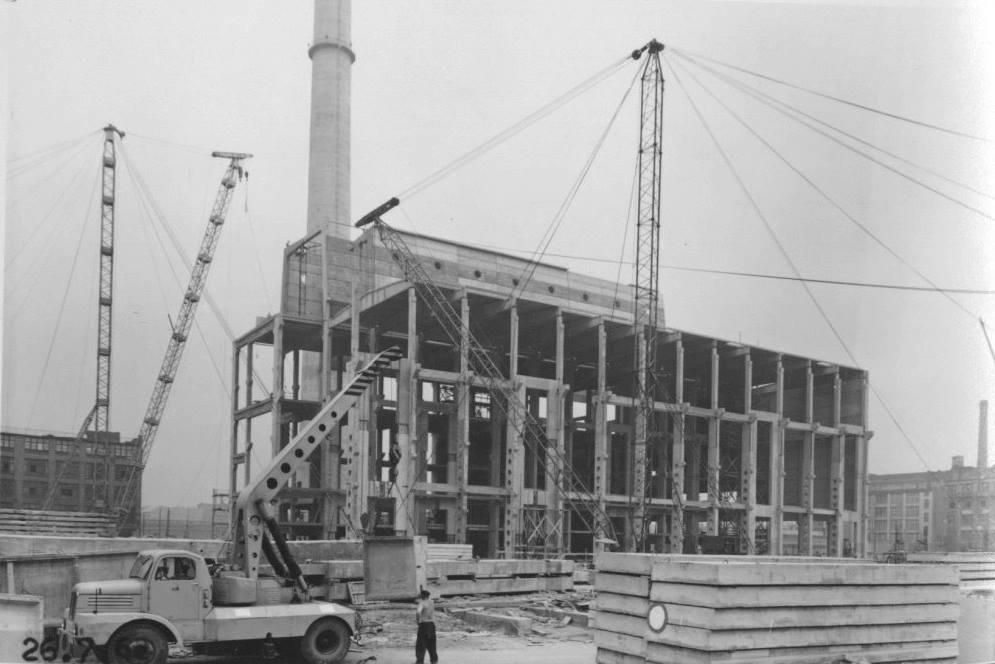 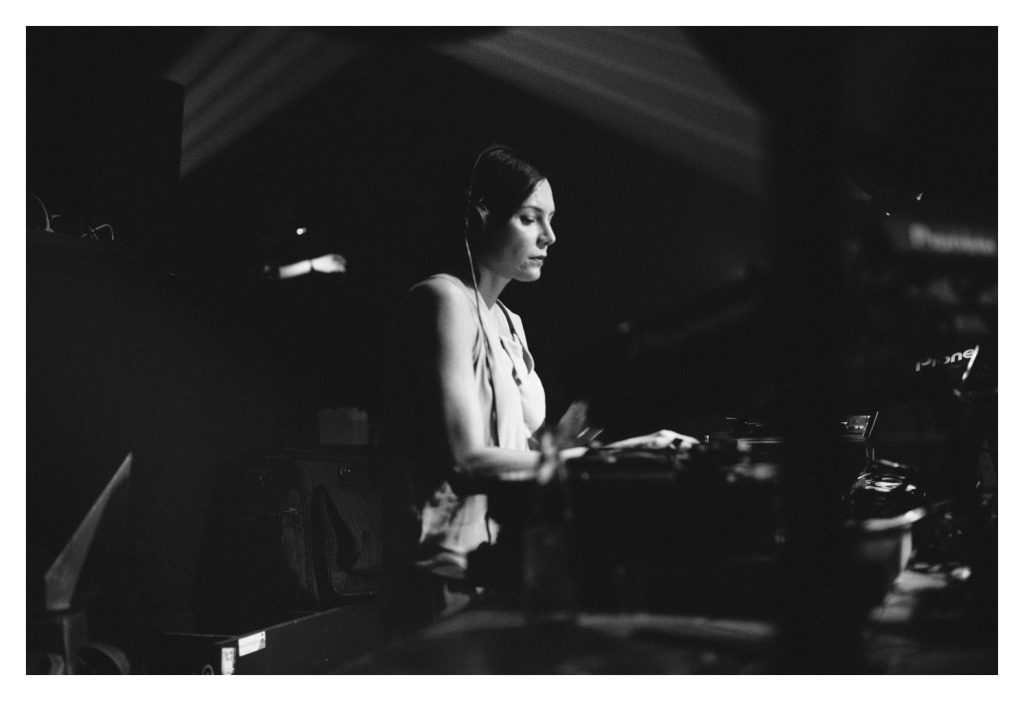 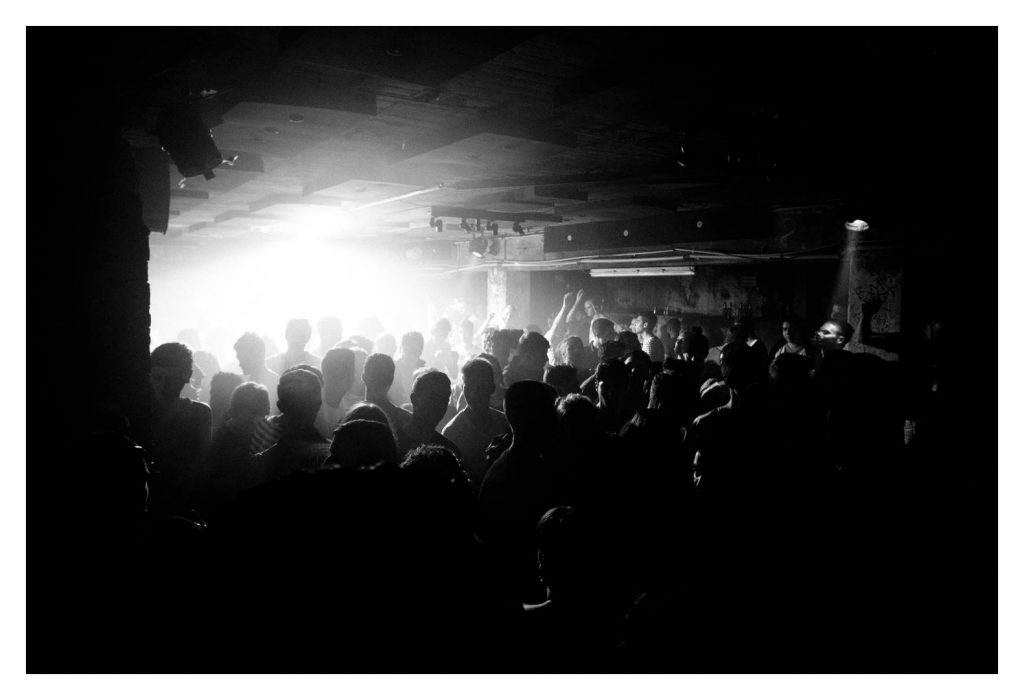 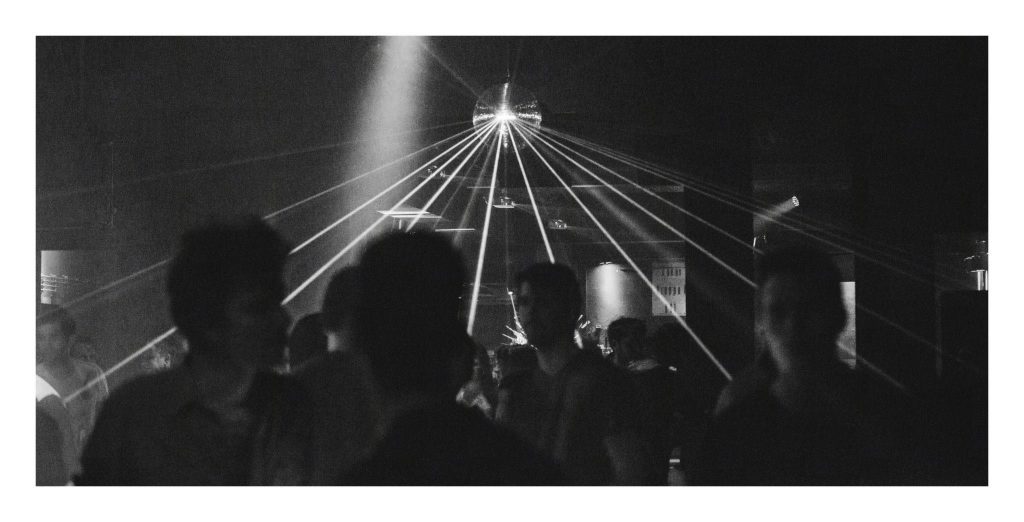 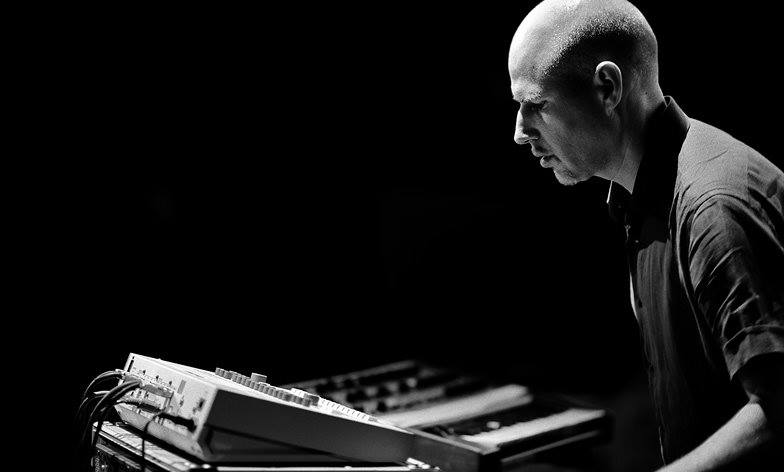 Daniel Bell, playing live as DBX. Can’t wait for that one. 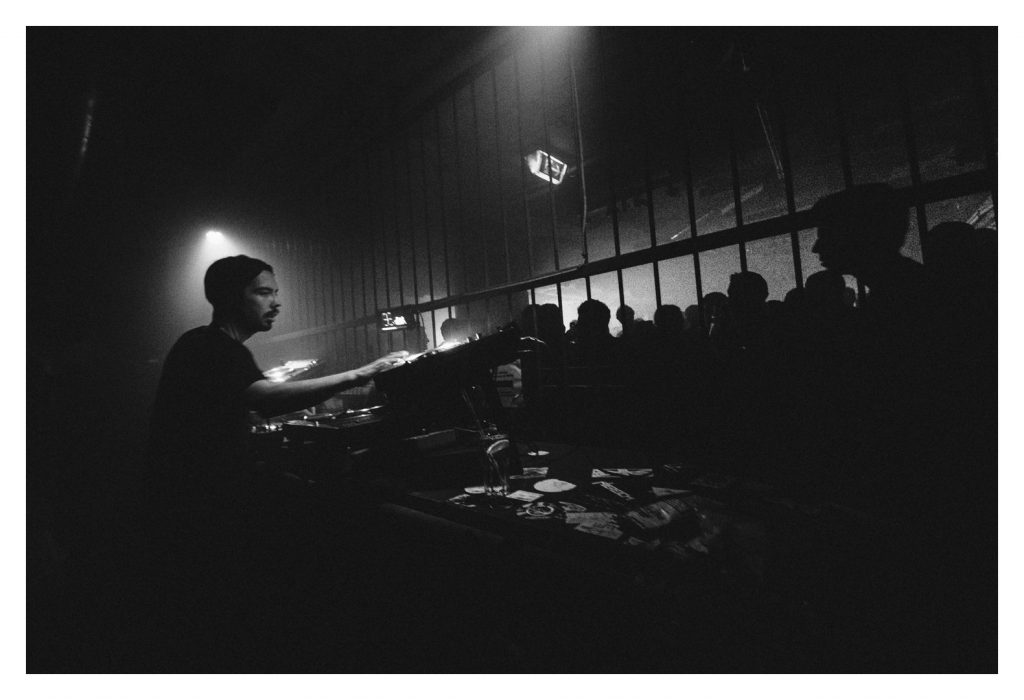 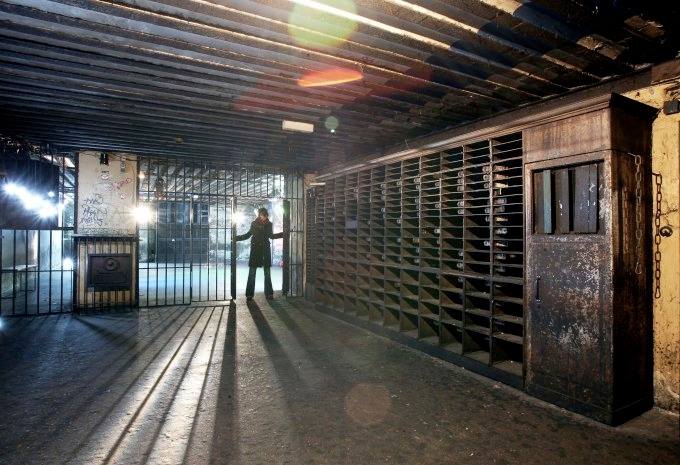 We’ve partnered with Beatport to share a set of 25 tracks that trace a small slice of that deep catalog. It includes some old classics, the younger generation carrying that torch, and gems like Objeckt’s terrific continuous mix Kern, Vol. 3 (with still more music, so… kind of more than 25 tracks, actually). 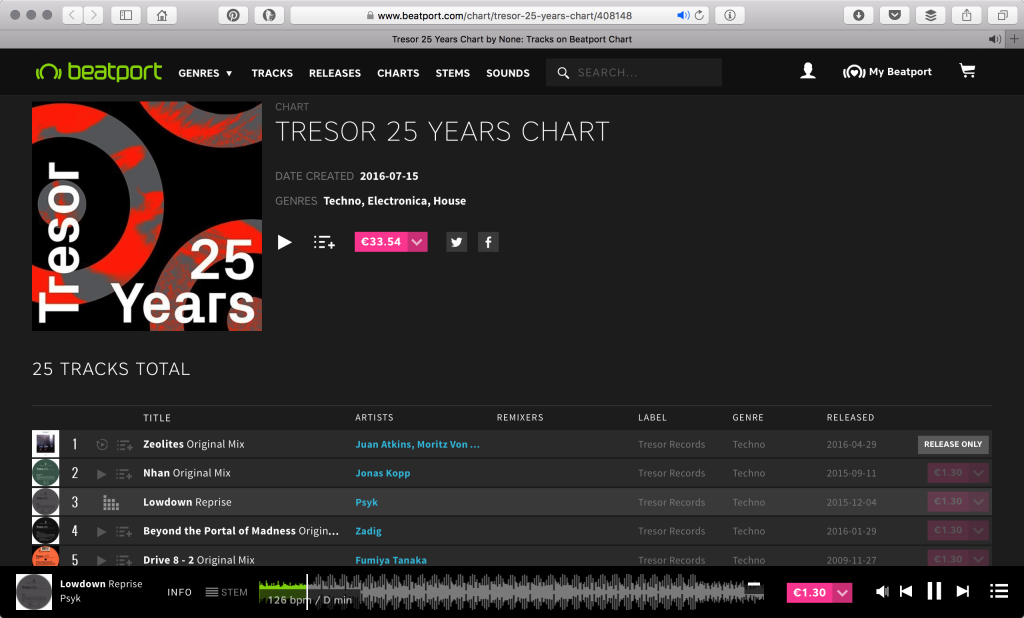 A new arc and a new module from monome