It’s tiny. It’s battery powered. It costs just over US$300 street. But Novation’s Circuit sample/drum/synth groovebox has been squeezing in a whole lot of functionality that makes it into a really serious tool, great for starting ideas or jamming or playing live. And we’ve been testing the latest build, version 1.3, for some days now. It’s available to everyone free right now, and it adds some significant changes that make this tool more flexible than ever. Let’s have a look.

First, for those who’ve just joined us, what is Circuit? Well, it’s a combination between a synthesizer and a sampling drum machine, all built around an 8×4 velocity-sensitive grid of pads that acts as sequencer. There are eight encoders at the top, which control different parameters in the synth and samples. You can connect to a computer via USB or hardware gear via minijack MIDI, and it works standalone without the computer. And you can get deeper into the sampling and synth engines by loading your own samples or editing synth presets. We’ve now done a complete hands-on guide; you’ll find

We loved the drum section’s custom sample loading feature introduced in 1.2, whether for drum sounds or melodic bits and pads or anything else. But it was pretty limited – you could only use four parts at once, and there was no way to play samples directly or audition them. That’s addressed in 1.3:

You can use samples per step, not just per part. Now each of the four drum parts can contain different samples. Novation calls this “Sample Flip” – but basically it just means when you change the active sample, you can do it per step and not just the whole part all at once.

There’s a lot of other functionality packed into the implementation. It makes sense to call this a “flip” in that it’s an event – you can record those changes as automation, you can duplicate them to other steps (even across paired parts 1/2 or 3/4), and macro and sample data are carried with the step when you copy.

Separating the samples from the sequence is fun, too. Start with a sequence, then change the sample on the fly. Or do it the other way round: start with a series of sample changes, then record in a sequence on top of it. And that all means some creative ways to generate and transform ideas.

You can play samples from the grid directly. Novation calls this “Sample Preview” or “auditioning,” but it’s really more than that — it’s the ability to play samples from the grid directly. So you can trigger one shots or play out of the confines of the step sequencer and you can play and improvise live, as well as, yes, hear what samples sound like on the grid before you record a sequence, etc. It’s something you’d expect of a sampling drum machine, of course, but it’s now available from the ultra-minimalist, ultra-portable Circuit, too.

Play longer samples. Up to all 60 seconds of playback can now be triggered without fading out, if you really want to do that.

New in the Web interface (Components)

Colors! You can assign colors to sessions.

Download and backup sessions individually. You can back up and manage individual sessions, not just batch 32 of them at a time.

Backup now includes samples, not just sessions. Everything is up on the cloud.

Rearrange samples on the grid. This makes it easy to group samples and organize them so you remember where they are (which, without labels, is essential). So now, once you add samples via the Web interface, just drag them around to reorder them.

Save as new… Create variations of sample sets and backups quickly.

Samples are labeled in the UI. No more guesswork, finally. (actually, Novation didn’t mention this in the press release, but this tiny little detail may be the biggest headache saver in the whole update!)

A better, more consistent UI. Librarian and Sample Import each now have the same UI and workflow. And the UI has been improved overall. And there’s a new UI for managing backups and sample sets. The whole thing is far more powerful. 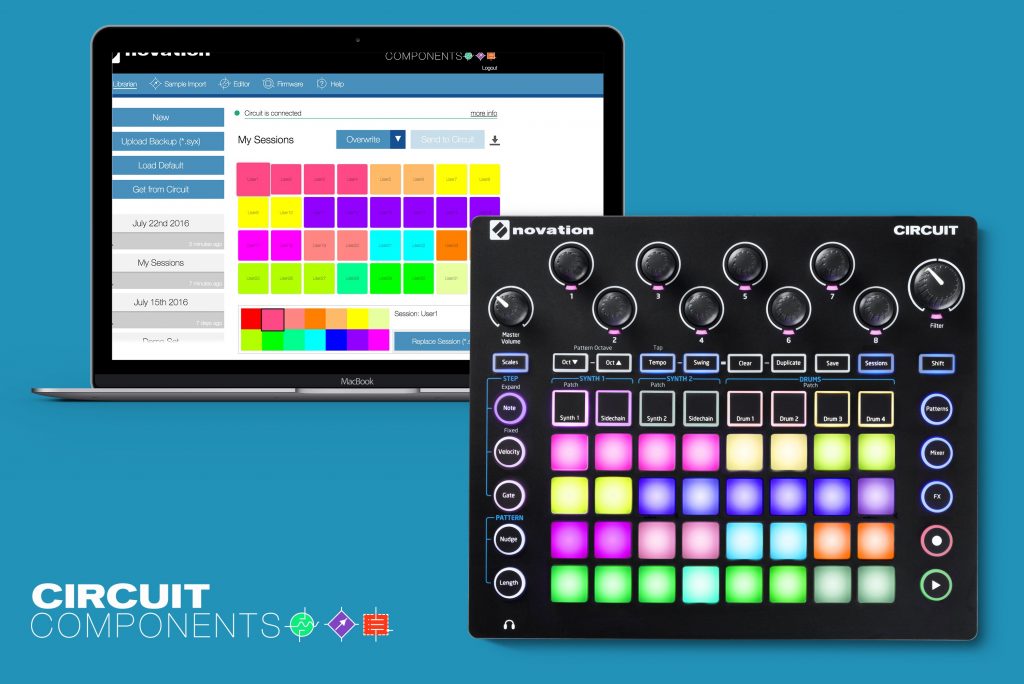 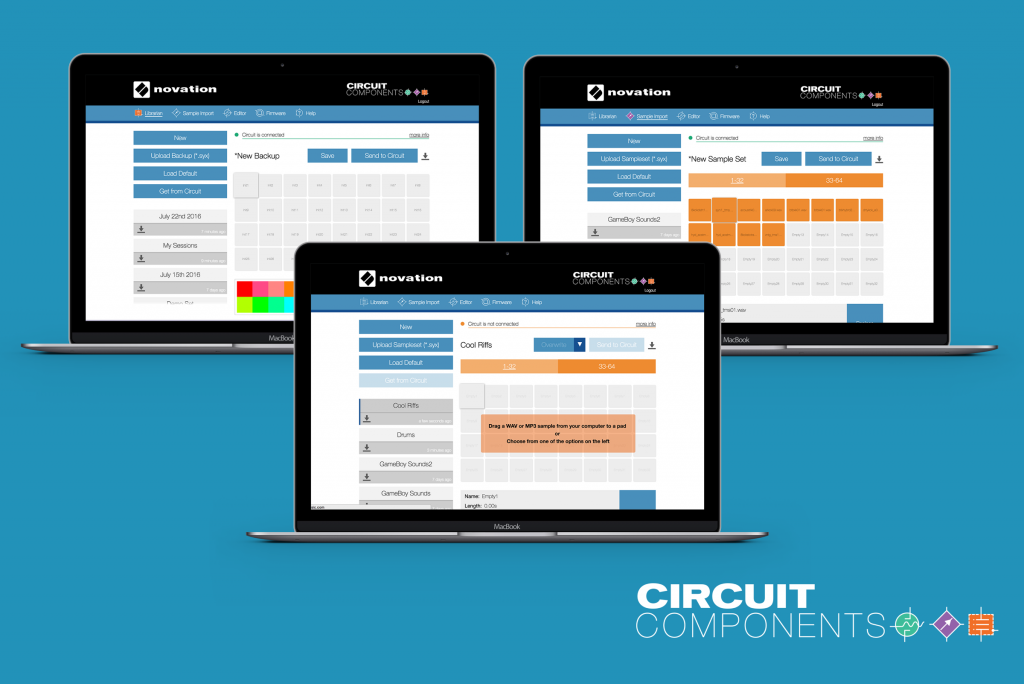 Components still requires Opera or Google Chrome / Chromium, and still requires an active Internet connection – I’d love to see an offline version for certain functions. But for now, I’ve been fine doing my management with the Internet on, then working with the Circuit without it off on a gig.

Also still not in this update is the ability to drag and drop multiple samples at once; I keep asking for that, and I hear it is on the roadmap.

But this clearly moved the Circuit from the pre-1.1 “ah, nice cool toy” to 1.2 “wow, this could become one of my main tools” to 1.3 “ah, wow, now I’ve almost no excuse not to use it as one of my main tools.” And seriously, I wouldn’t be saying that if it had just popped into my head; I’ve been talking to other Circuit users and been really blown away by how much they’re doing with it.

And now, as part of a new CDM feature I like to call “Wow, many people are better at music than I am,” I introduce Dibia$e (Alpha Pup):

It’s actually a dark time in music technology. Once, this was the domain of people who had no chops, and now, sadly, through the force of “democratization” or whatever, people who have actual musical skills are invading our turf! 😉 (Damn, I better go and do something. What’s this word “practicing” mean again?)

Give it a go

If you’ve got Circuit, all you have to do is fire up Chrome (or Chromium or Opera), login with Facebook or Google, connect your Circuit, and install. (The login is necessary authentication for your cloud backup so that, say, Romanian or Russian hackers don’t start performing with your set – uh, sorry, too soon?)

PPG Phonem, now on iPad, synthesizes sound like the voice

Hardware
MOD Devices made a guitar synth you can actually play like a synth – so your guitar is the CV
hands-on
EboSuite 2.0 hands-on: live video recording and more makes VJing feel native in Ableton Live
Hardware
The Oberheim OB-X8 is a beast – here are more sounds from it, straight-up
Hardware
MIDI Polyphonic Expression has been updated with one powerful feature: better documentation