Surprise: Elektron’s latest isn’t a drum machine or sampler or sequencer. Analog Heat is instead a box you use with other stuff. And it has two missions. Mission one: add character to other sounds, via distortion, EQ, a filter, and modulation. Mission two: work with your computer, as an audio interface and as a way of adding that same analog business to software signals.

Of course, the basic idea is nothing new – walk into any number of studios and you’ll see, say, a couple of Moog Minifoogers or some guitar pedals waiting alongside a computer, ready to do some damage. We’re lucky enough to be in the business of music and not, say, video or photography – our daily life involves adding as much dirt as possible while other fields are tasked with removing it. Guess which is more fun. Woe be to the beleaguered retouch artist working on fashion shoots. Wow… wouldn’t they love if their job were more like ours? Editing the Cosmopolitan cover would be like being a makeup artist for The Walking Dead. (More scattered brains, please!)

What’s interesting about this is, well, it’s all been Elektron-ified. So you have one box that combines what would otherwise be a series of pedals. That means changing distortion modes is as simple as turning a knob, and the filter has not just a resonance knob but seven different functions. And while the “heat” is analog, the control is digital – so you can store and recall presets. And it’s computer-friendly, complete with Overbridge support (meaning you can use it as a plug-in effect on your computer), a USB port, and 2-in / 2-out computer interface operation. 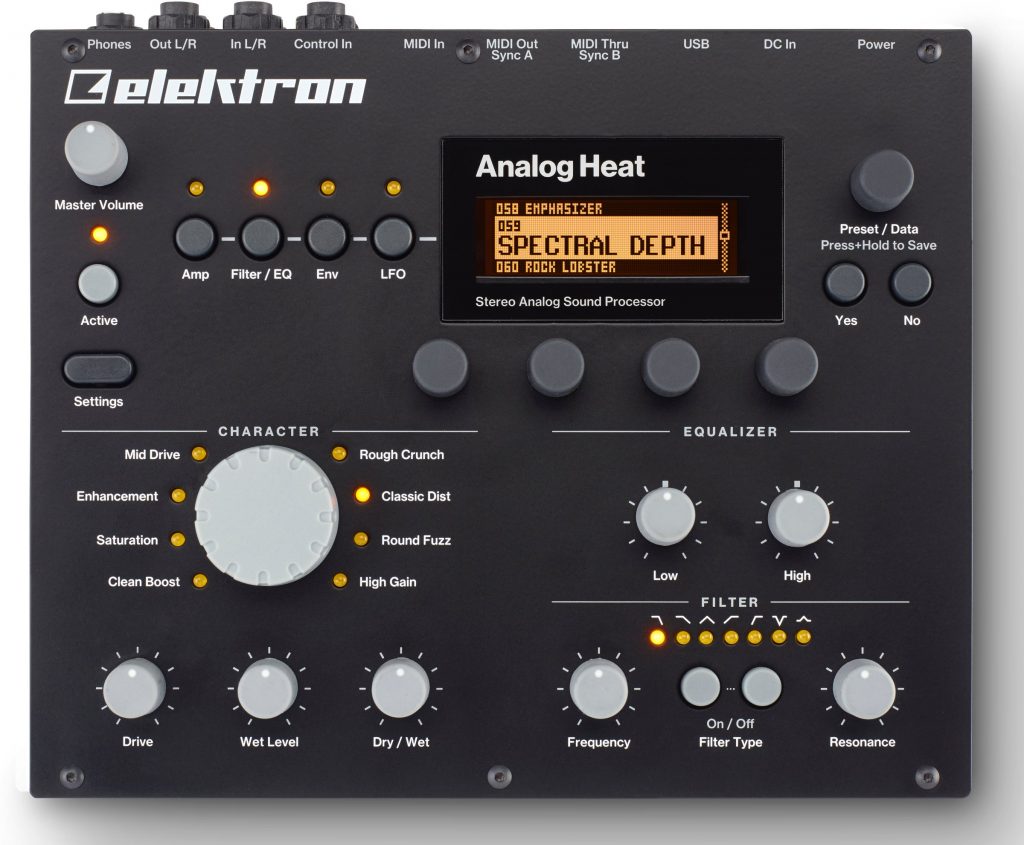 Once you think of it that way, the US$749 price doesn’t seem so steep. Even with mid-range gear, if you did want all of this stuff, you could easily wind up spending the same sum. (That is, not – oh, $749 is cheap or oh, fortunately I have $749 here in my bank account waiting to be spent. But – it does sound like a price point with some logic behind it.) Of course, this assumes you want this particular bundle of functionality in a hardware box. Then again, “do you want all this stuff in a box” summarizes the Elektron value proposition.

It’s funny: all these products are coming just as computer modeling of these sorts of analog circuits is getting really, really good. But on the other hand, there’s a real advantage to gear that can stand on its own.

It’s not hard to imagine the use case here. As analog gear, even Eurorack, has gotten more pristine, adding dirt back to the equation actually becomes necessary. (Well, okay, that necessity never went away, did it?)

And the Analog Heat seems well equipped for the full range of modification from coloring to synced modulation effects to heavy demolition.

So many sound examples:

Making it do double-duty as an audio interface seems a natural. It’s then an all-in-one sound output and sound grunge gadget, one saving precious kilos off the carry-on weight limit dreaded by gigging electronic artists.

This went way up my list for things to test. And I have to say, it’s really nice to see both something marketed as a sound processor and in the desktop space, as well. We’ve got loads of synths and loads of Eurorack modules, but not so many things like this.

Stay tuned for when this arrives this fall. And assume that Sweden is now prepared to make really goth stuff during that bleak, bleak winter.

I’m a little worried what would happen if we gave this to our MeeBlip triode. It might decide to forget the First Law of Robotics and come murder us in our sleep.