fluXpad is an insanely immediate music drawing tool for iPad

Make an interface simpler, and you might push your musical expression further. That’s the realization you have using fluXpad, a new drawing app. It’s not that it’s a dumbed-down rendition of other tools. It’s that doodling with sounds is a totally different experience than the point-and-click fine editing you might be used to.

fluXpad, out this week, is the latest app to translate the imagination of inventive, quirky music act Mouse on Mars into software. (Disclosure: I worked with them to developer their handheld effect instrument WretchUp. We were also really interested in immediacy, simplified gestural controls, and single-screen functionality.) This time, Jan and Andi team up with developer Jan T.v. Falkenstein to produce an app built on years of research and experimentation.

How to explain it? Let’s let a crazy puppet do it for us:

Of course, there’s a long history here. The dream of translating a drawing into sound directly is presumably as old as notation, and saw early implementations by the likes of Iannis Xenakis with his UPIC system (and later the deep Iannix system). Mouse on Mars’ own research started with tablets and dates back some years (also involving Florian Grote, who worked on WretchUp). Before he teamed up with Mouse on Mars, lead developer Jan T.v. Falkenstein made apps of his own, too, like Gliss (now discontinued) and SQRT. But now fluxPad is here, available to all on the iPad, as one of the most fully developed, friendly iterations of the concept we’ve seen. It’s graphical music making brought to a primetime audience.

The key here is getting everything on one screen. On that screen, though, there are different parts – each color-coded – so you can combine more than one sound. 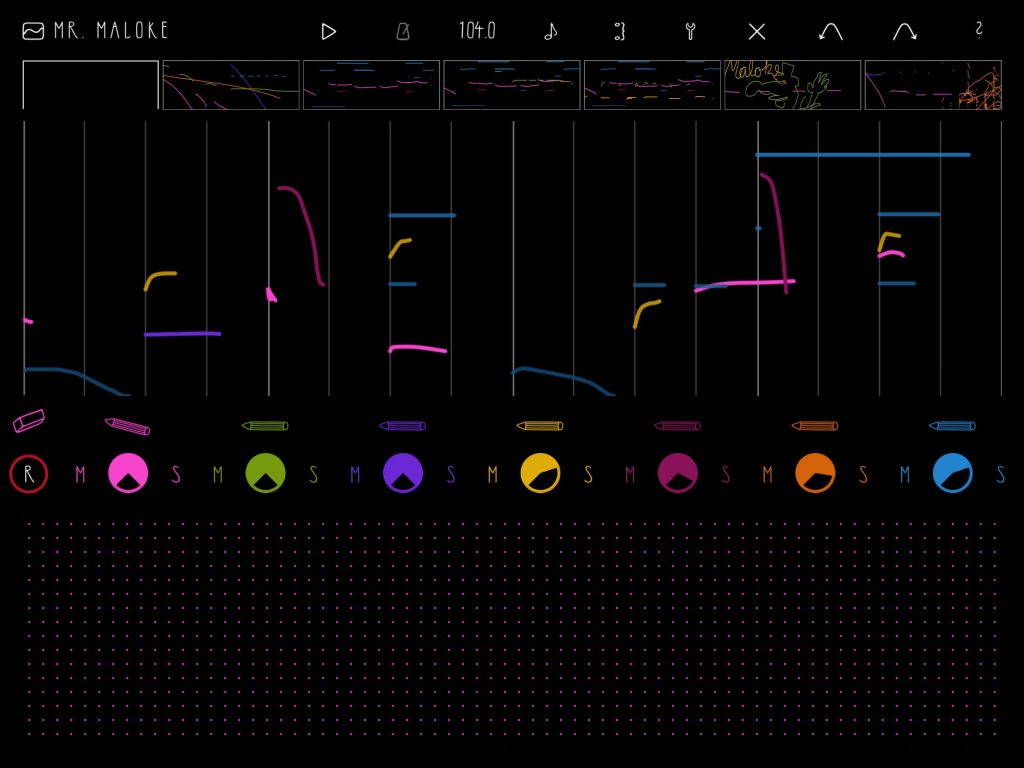 Six of these are “melody” sequencers based on samples. These are re-pitched on the y axis, so you get cartoonish transformations of sound if you like.

One is a “percussion” sampler, using seven samples you choose.

So seven parts total, and each of those has seven patterns. You don’t get more than that, so doing an extended set with patterns will be a bit tricky. Then again, improv is part of the point.

You can draw in or play patterns. Unfortunately, there’s no velocity – one axis of the performance pad is wasted; it’d be nice to have finger position represent different velocities.

You can quantize or un-quantize patterns destructively. Quantization makes it really easy to get grooves going, but you aren’t restricted to the grid – though you are restricted to a fixed length. (If you want longer patterns, though, you can set an extreme bpm and just divide up the bar. You can’t mix pattern lengths, though, which would be nice.)

Inside, you get basic sample editing – so you can determine loop, envelope, and start and stop points. 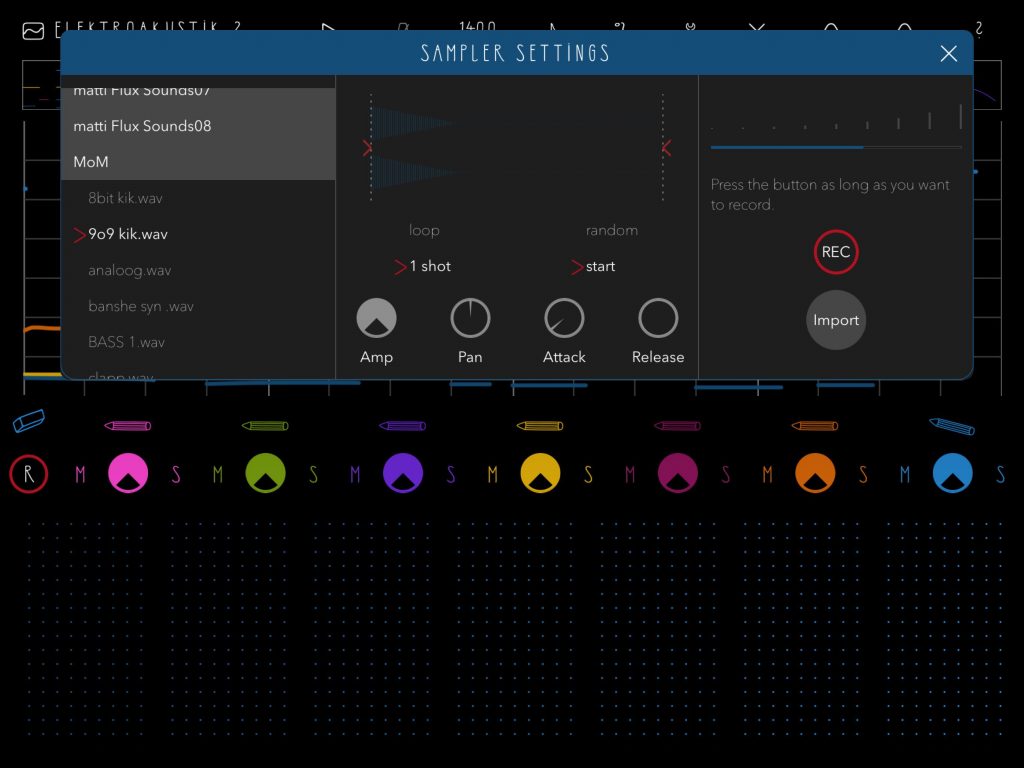 The app is well-connected, too.

Getting audio in and out works with external audio or apps:
Record from the mic
Audiobus
IAA (Inter App Audio)
AudioShare
iTunes Library support (including sample import)
Export/backup (including recorded sounds, though you can only re-open the patterns in fluXpad)

As with lots of apps these days, the developers assume users will want sound packs. So you get a bunch of sounds out of the box from Mouse on Mars and others, and more projects and sounds can be purchased in-app. I’m really curious just how well that business model is working – and whether it varies from app to app. In the meantime, though, I have to say I think recording your own samples may be the main draw.

And it looks insanely fun. I’d love to have more flexibility with rhythm/pattern length and velocity, and the ability to store more patterns, if there’s some way to do those things without sacrificing the one-screen layout. It’s also interesting to imagine what might be done with pressure data from Apple Pencil on the iPad Pro. But it’s already a compelling, lovely app. Check it out:

The history is itself interesting, drawing together [oops] some like-minded individuals with notions of how to do this:

Mouse on Mars hired Florian Grote who is now a part of the Native Instruments team, to work on an idea for a prototype app to draw and sequence sounds. With the success of Apple’s iPad it became clear that this tablet would be a perfect platform to bring the idea to a larger audience. At that time Mouse on Mars happened to meet composer and developer Jan Trützschler v Falkenstein via STEIM (Dutch institute for electronic music of which Werner had been the artistic director for a while).
Jan created several music apps such as Gliss and SQRT under his own label TeaTracks. He had been exploring similar ideas regarding the drawing of sounds during his PhD at the University of Birmingham which resulted in the iPhone app Gliss.
It made sense to them to team up and merge their ideas into fluXpad – the first intuitive drawing and sequencing music app.

And for some insight into Mouse on Mars’ process:

berlin
Faded Instruments has a line of candy-colored 1U tools – easy modular stocking stuffers
Software
The best Cyber Monday deals you can get now on synths, plug-ins, and more
Software
MadMapper 5.2 is here, with more lasers! (and DMX CSV, Xbox controllers, and Kinect)
appsiPadSoftware
SAND hosts your iOS plug-ins, sequences them with patterns, records them