Here’s all that new Roland stuff in one place, even accordions

It was called “909 day.” It was on the ninth of September. And it included a new 909 product. So far, so good. But Roland’s 909 day stops making sense around there. It launched over 30 products, many of them unrelated, over 24 hours. “909 Day” saw new … accordions. Also, record players that said 909 on them. There were four continents, and a marathon Web stream that would have taken 24 hours to watch, sometimes switching between Japanese and English. In years of covering this business, I’ve never seen anything like it. But before you blow this off, there was some cool stuff in there – depending on whether you play the accordion or sax, for instance. Let’s make sense of it.

Roland’s SYSTEM-1 was actually in some way the most interesting of the first AIRA offerings, not so much because of its PLUG-OUT technology, but because its default mode was a genuinely new synth. So, yes, it was built on ACB – their name for their proprietary component modeling techniques – but it was alive and weird and wonderful. But there were problems. I found the build below Roland’s usual standard. PLUG-OUT worked, after some plug-in updates, but you could only load one model at a time, which sort of defeats the purpose.

I hope the SYSTEM-8, a keyboard version, improves on the original. Roland is promising updated ACB – as with the Boutique line, they’ve been tweaking all their models. It does seem it has a better keybed, which to me was the deal killer on SYSTEM-1.

Because it works with “PLUG-OUT,” you can load different software models of instruments (purchased separately). JUPITER-8 and JUNO-106 are included, or add SH-2, SH-101, PROMARS, and others.

Now, maybe you didn’t ask for or want a PLUG-OUT flagship. But because you’ve got one, PLUG-OUT itself is far more usable. There’s the ability to switch between three models on the device, instead of being stuck with just one you can only swap from a computer. You can layer or split those models, too – add a JUNO lead atop your JUPITER bass, for instance. And you can load slots from SD. The upshot is that PLUG-OUT finally works more like hardware sound expansion. It gives back rather than demanding more from you.

Plus, the AIRA TR step sequencer is on the SYSTEM-8 too, along with a lot more controls.

The bad news: it’s still light-up green. And while it’s more powerful, it’s US$1499 — which means you’ve got some strong choices from the likes of Dave Smith or Moog competing for your hard-earned cash. And while it’s nice not to have the flexibility of swapping models, now with three onboard at once without going back to the computer, there’s a trade-off in the intuitiveness of the control layout. The SYSTEM-1 was frankly a bit weird using it as anything other than the default. So I remain a bit cautious here.

Still, if Roland are doubling down on this idea, at least they’re doing so in a way that makes it more appealing.

Lots of smart discussion on SonicState.

Correction: when I first wrote this, I missed the very important detail of there being three PLUG-OUT slots.

By far, the product I expected least is something called the Aerophone. It’s a kind of digital wind instrument with sax fingerings. That puts it in the category of things like the AKAI EWI series and digital brass instruments, but with some important differences.

First, if you’ve played a sax, you can pick this up and play it right away without any new fingerings. Second, it comes with all the sounds ready to go – clarinet, flute, oboe, trumpet, violin, plus all the sax parts, and you can layer those.

I think wind instruments are as natural a match for electronic performance as keyboards are, so to me, this is a great development.

A visual inspection will see what I mean: the EWI looks like a clarinet, and the Aerophone looks like a saxophone … from another planet.

That Aerophone also looks freakin’ huge, a bit like a keytar for the mouth, but … I’m still interested to see it.

Oh yeah, and synth heads can make fun of these all they want. There’s a whole world of instrumentalists out there, though, and they’re a lot larger than the synth community. 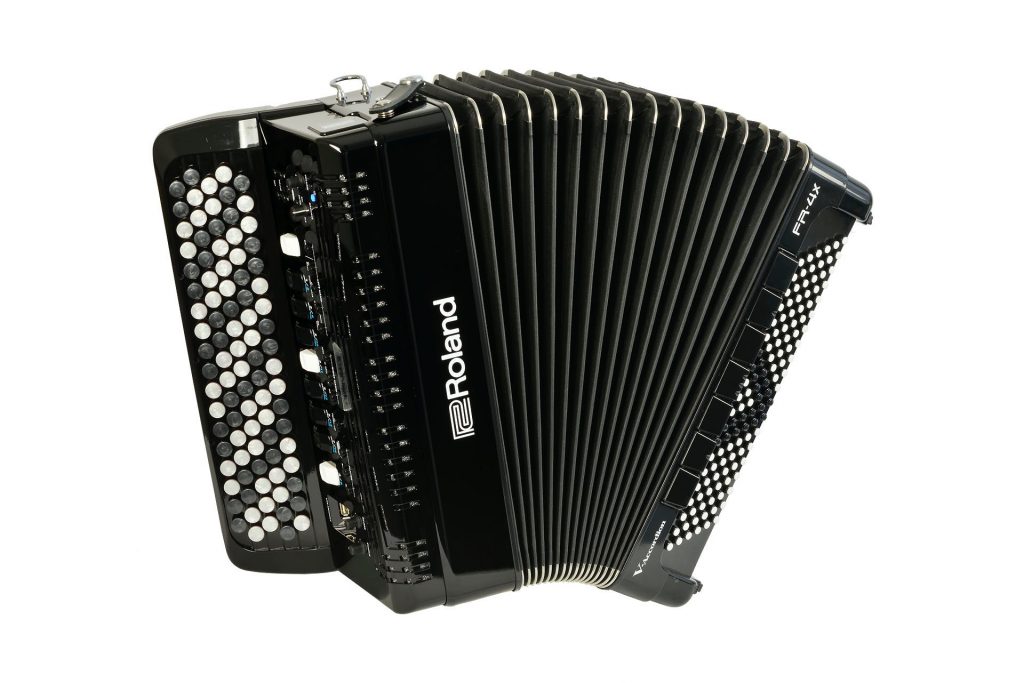 Yes, there’s a new V-Accordion – the FR-4x. That’s Roland getting under the $4000 mark. Uh, for everyone who thinks Roland is just cheap stuff made in Asia, this is a flagship accordion of the future built in Castelfidardo, Italy – seriously. There are people in Italy building MIDI accordions. We live in a wonderful age.

You can actually tell a lot about the traditional side of Roland looking at this thing. There’s a similar philosophy as to other instrument categories: load this with sounds, let it run on batteries, meet different genre needs, and offer things like USB playback to keep up with the Internet.

Ernie Rideout, former editor of Keyboard magazine, is actually an accordion player and reviewed the very first V-Accordion. Again, make fun all you like: there’s a lot of accordion music in the world.

I’ve seen Matmos play Whirpool washing machines in Berghain, so … I’d also like to see someone make techno with a V-Accordion, quite frankly.

It’s available in all black finish, so it won’t get turned away at the door. 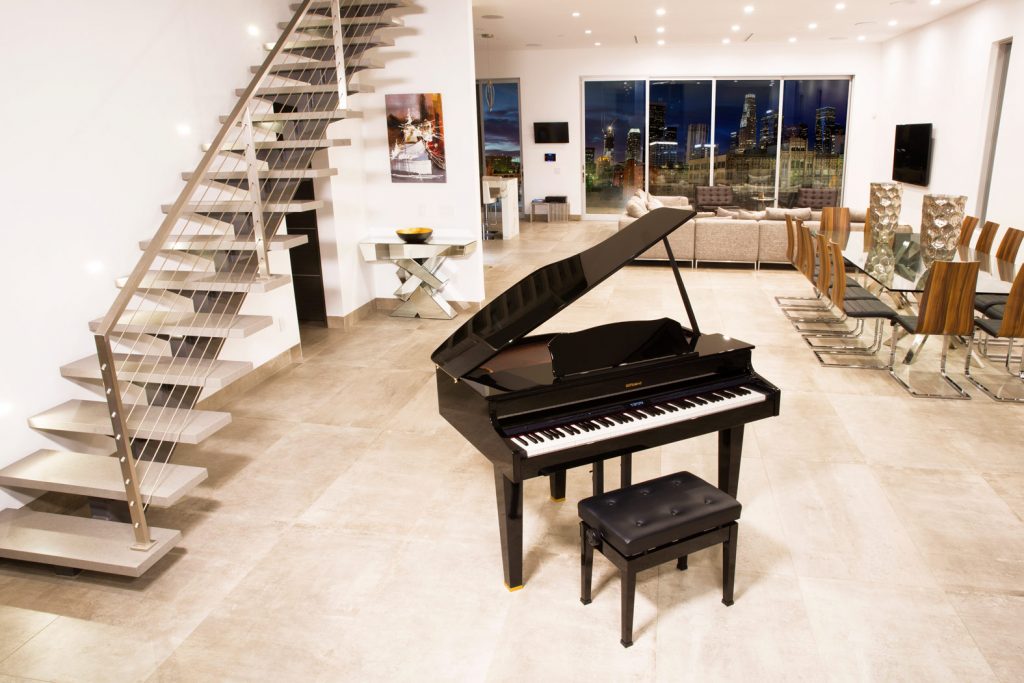 The funny thing is, in the midst of something called “909 day,” Roland not-so-quietly made an aggressive play for the home digital piano market – one that pits it head to head with Yamaha.

There are some interesting features here. Roland’s progressive hammer action has improved a lot lately, and SuperNATURAL has upped its sound game. These are premium-priced digital pianos, but you get a compelling offering.

More gee-whiz stuff lately involves Bluetooth MIDI, which allows integration with tablets and hands-free page turning. There are also interactive features for immersive sound, interactive metronomes, and more. I really wonder what the experience of growing up with this stuff is; it’s the one and only case where I really don’t feel digitally native. 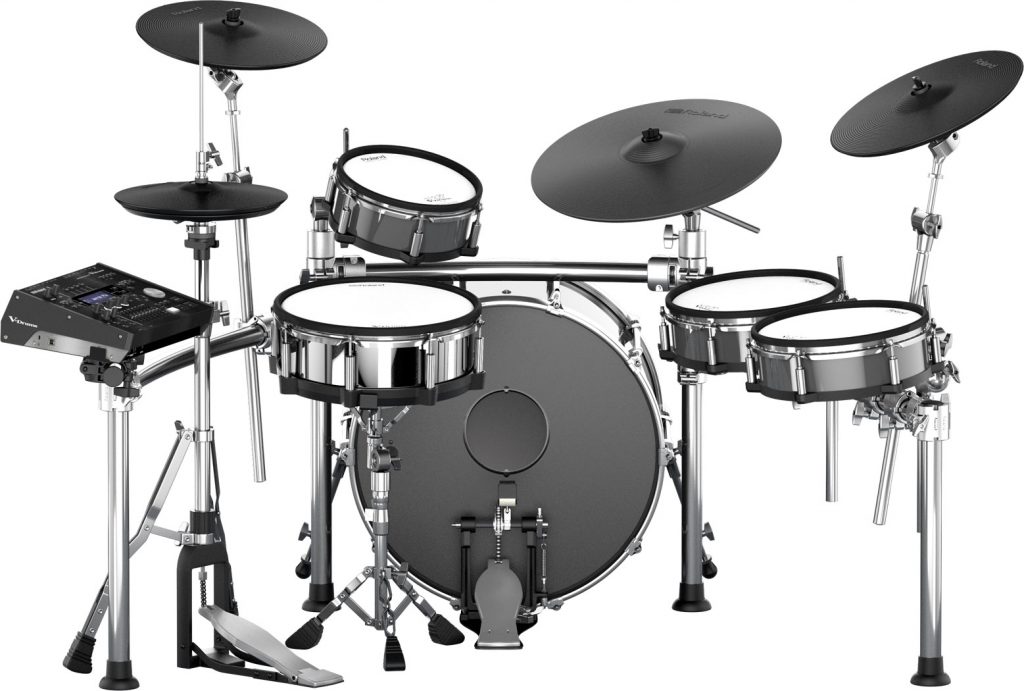 The latest model V-Drums actually represent a big upgrade. The sound module is all new, and does what Roland is doing elsewhere – from circuits to acoustic instruments – bundling together a bunch of proprietary modeling stuff that’s meant to make things more playable.

What’s nice here is, this isn’t just a black box of presets. You can customize heads and shells, choose mics and ambience, add compressor and EQ, and even save and compare snapshots.

In other words, what the V-Drums represents is the latest attack on computer software. To my mind, I can’t see a whole lot of benefit to a drummer working with soft synths, because they can get similar power in a drum kit – and they need the hardware anyway. (Film composers and whatnot are another matter, more likely to customize the software.)

Oh yeah, and – interesting to CDM readers, you can even load your own samples on SD card for the first time.

New sensors, new snare and ride pads – technologically speaking, the V-Drums might be the most sophisticated of the new Roland announcements, even if it was the one that got the least attention. (Create Drum Music? Dunno… somewhere. Me in an alternate universe, possibly. I hope I also have a goatee there and that I’m totally evil.) 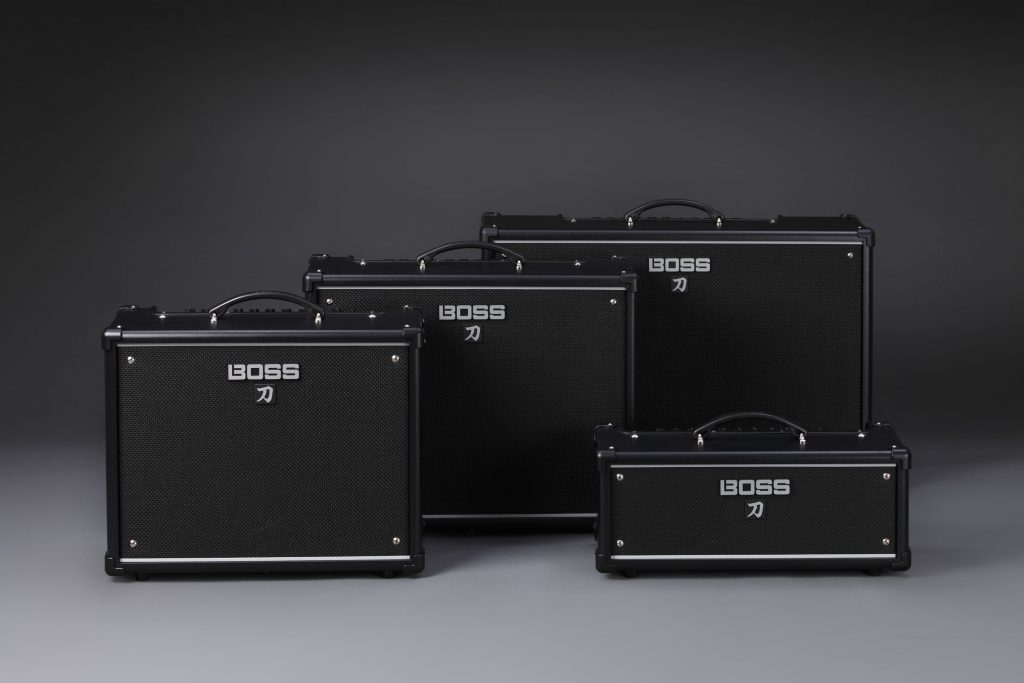 The first BOSS announcement is easy to sum up, because you start with the price – BOSS are making a US$199 version of their GT effects processor. I almost don’t care what it does; I think that’s going to be competitive with other offerings, partly because of the name (and the GT has a lot of sonic experience in it). The looks are nothing to write home about, but on the upside, they’re also not confusing, which may be the key here. 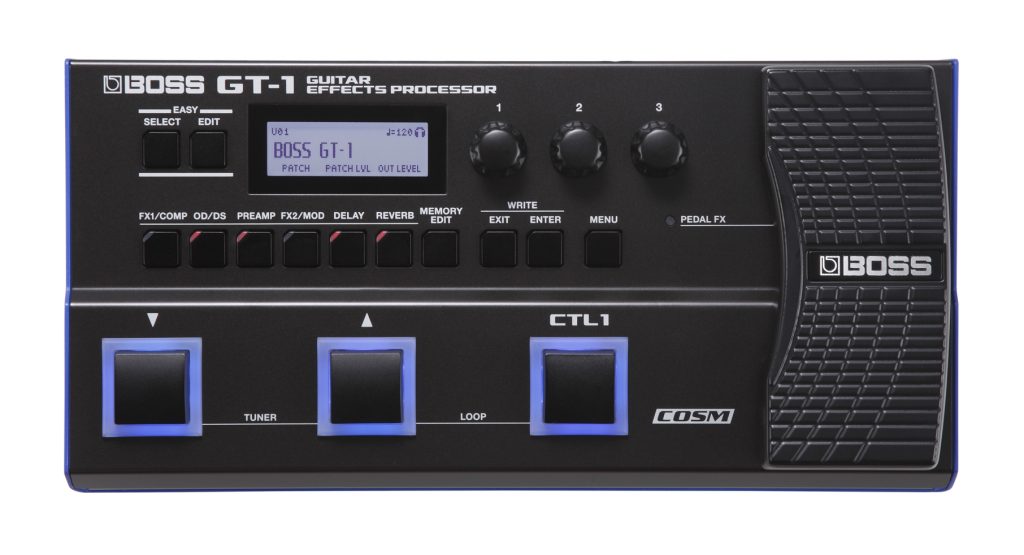 More interesting is the BOSS Katana amps, BOSS’ big new amp play. It’s interesting because the line integrates BOSS effects, which I think is meaningful to a lot of people. And Roland are also playing up on their Japanese-ness using script and name to evoke quality, which I think is smart marketing. Here’s where things get Roland-y, though – you control the head via MIDI? Customize the effects via software? Head-scratcher for me, but, well, different, at least. 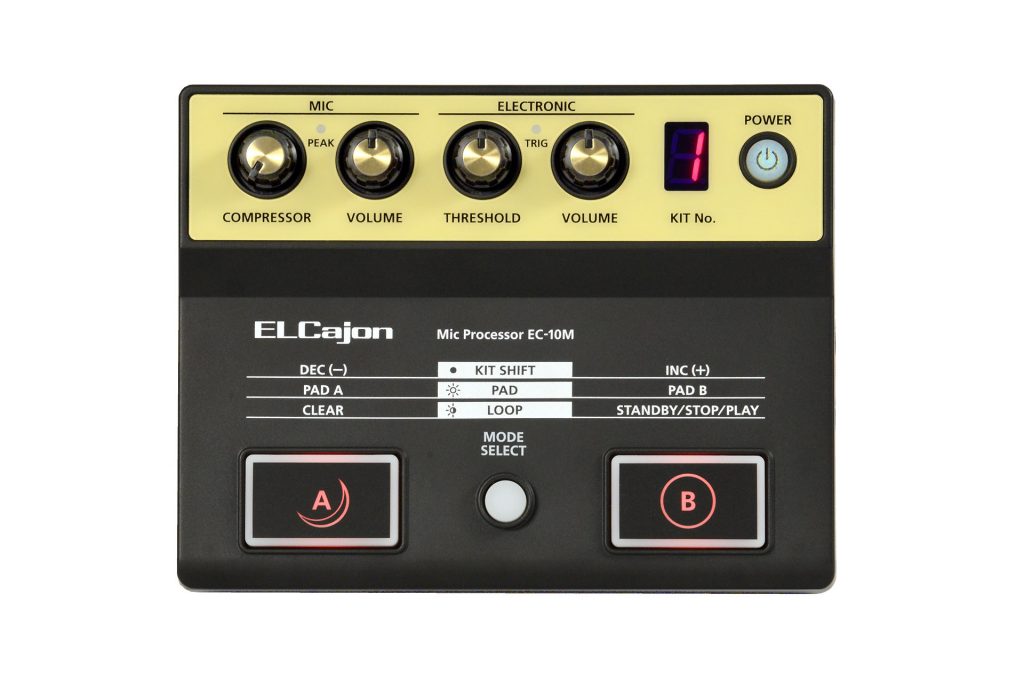 Here’s why I love Roland. Their ELCajon EC-10 was an acoustic cajon (a percussion instrument) that layers electronic sounds – basically, the best busking product I’ve seen in years. Now, it’s available as a standalone module, so you can use it with your existing cajon.

Now, there’s just no excuse for anyone not to have some cajones.

Sorry. I’m really sorry for that. There were a lot of announcements. I lost some sleep. Moving on. 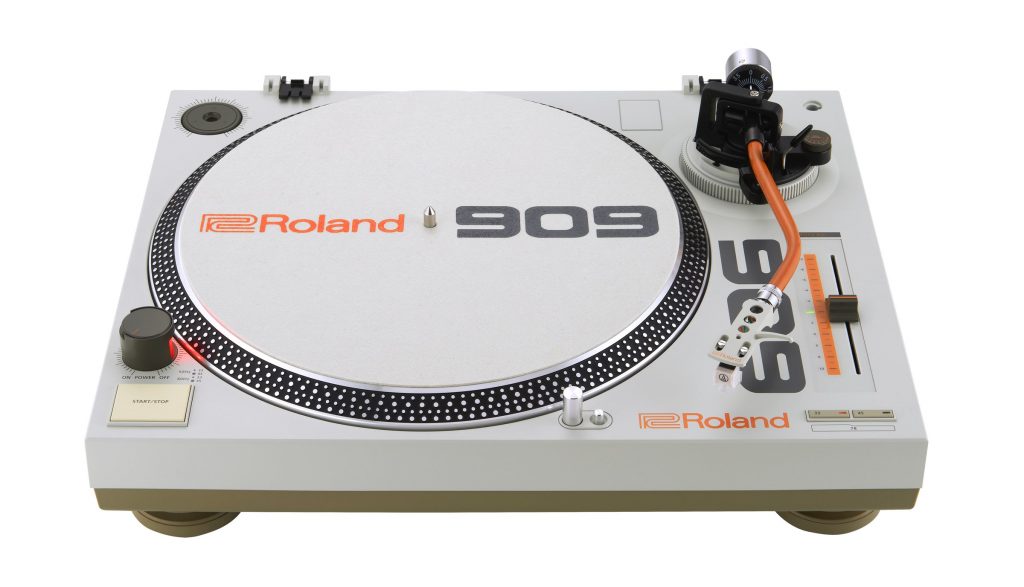 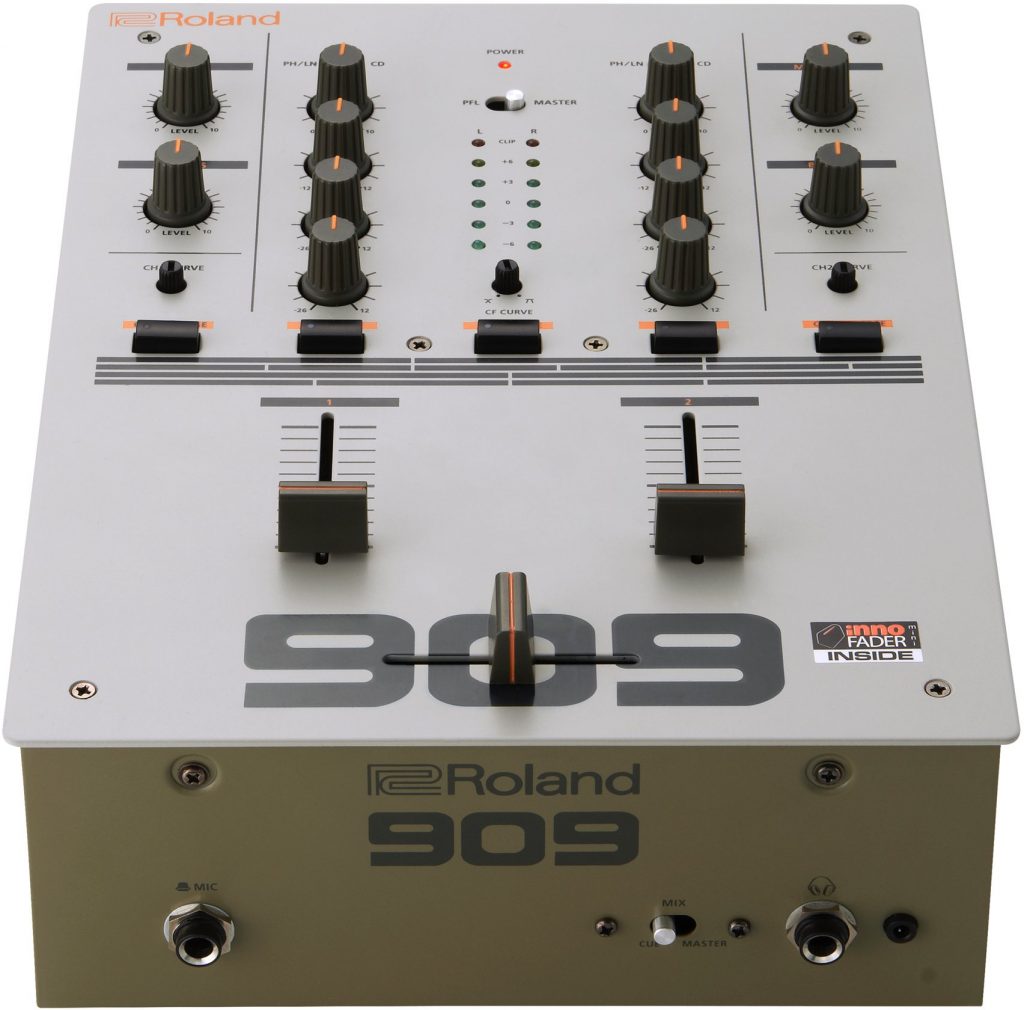 I’ve saved these for last, because… they appear to be bog-standard products that Roland has just rebranded, and are otherwise not worth mentioning. Still, Roland: if you’re doing mixers and turntables, I really would like to buy 909 sneakers and underwear. Consider.

And a video switcher

But I’ll put that in another article. Okay, so not quite everything fits here.

This is of course on top of the Boutique and DJ ranges we’ve already covered.

I’ll say this, though: Roland is coming for the market, in an aggressive way I haven’t seen for a long time. Combine this with their DJ partnership with Serato and the Roland Product Group’s more particular approach to our electronic production market, and Roland seem to be on their game again.

Jamming standard: Ableton is opening Link to everyone, starting today