There’s something magical about the moments in history when computers were able to speak (and sing) like a human. That’s certainly true of Bell’s famous “Daisy Bell” performance (the real-life moment echoed in 2001). But it’s also true of the Mac, which first spoke to uproarious applause.

David Viens of Plogue is recounting that history as part of a larger look at the chips that have gifted us with sound. In part one, he looks at the birth of MacinTalk, the unmistakable original voice of the Macintosh – one that, far from sounding dated, perhaps to our ears today sounds classic:

David is leading an effort to restore these sounds for his software chipspeech. That involves digging into long forgotten code with the kind of painstaking passion you’d associate with an art historian removing grime from an Old Master.

He’s even (legally) reverse engineering code from MacinTalk’s original binary, porting it to C++. (Original source code has been lost.) 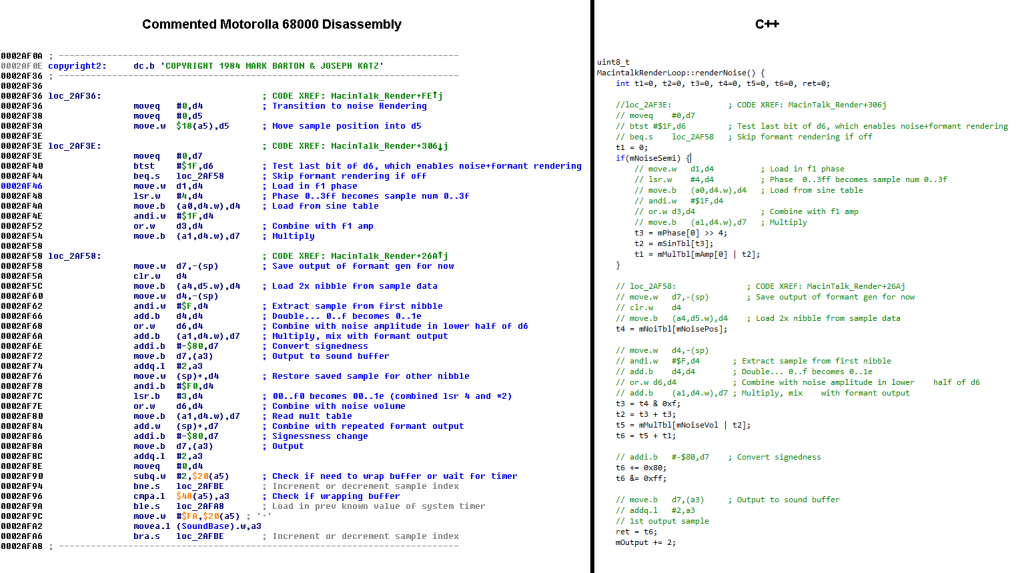 There’s more. Stefan Stenzel is taking a break from his day job (being CTO of none other than Waldorf Music) to help work on the new chipspeech. He tells CDM a bit about his motivations, doing this as a labor of love:

Back in the 90s, one thing that caught my attention was the STSPEECH.TOS for the Atari ST.

How was it possible that this program generates speech from text?

It was the closest thing to magic my computer could do, so I disassembled the program and tried to figure out how it worked. Later I modified the program so it could generate wavetables that resemble speech, and when I asked the original authors for permission to release this hack, they sent me the source code. That was of course very nice, but also very interesting – now I had well documented source code of what I previously had painstakingly reverse-engineered. It was written in 68k assembly, so in order use it on a modern platform, I translated it to C.

Much later I bought chipspeech from Plogue and came into contact with David Viens. We discussed the possibility to include STSPEECH into chipspeech, and I asked Andy Beveridge again for permission, which he and Martin Day generously granted. We also agreed on a Punk as impersonation for several reasons:
Both feature a harsh sound, and STSPEECH was conceived in Britain in the 80s, where Punk was still en vogue.

With the release of Chipspeech 1.5, you get two essential 16-bit speech emulations:

First, there’s the sound of MacinTalk (the algorithms for which later saw use in Amiga’s narrator.device.)

and Atari ST’s STSPEECH.TOS, a sound associated with early techno (among other things).

Accordingly, the legendary chip musician goto80 has composed a launch song to celebrate:

It looks like a stellar release. Plogue’s chip emulations are to me as essential as musical instruments as are recreations of classic analog – and just as versatile in finding new musical contexts. More than just nostalgia, they’re something special, a chance to understand the sound and voice of the technology around us. So I’m really excited to give this a go.

Software
Roger Linn shares hidden settings and more gems from the LinnStrument
history
Paik’s Video Study is a 700-piece archive of the work of Nam June Paik
MacPlug-insSoftwareWindows
The best Cyber Monday deals you can get now on synths, plug-ins, and more
MacSoftwareWindows
MadMapper 5.2 is here, with more lasers! (and DMX CSV, Xbox controllers, and Kinect)